ANC to ‘engage’ with Malema after racial outburst 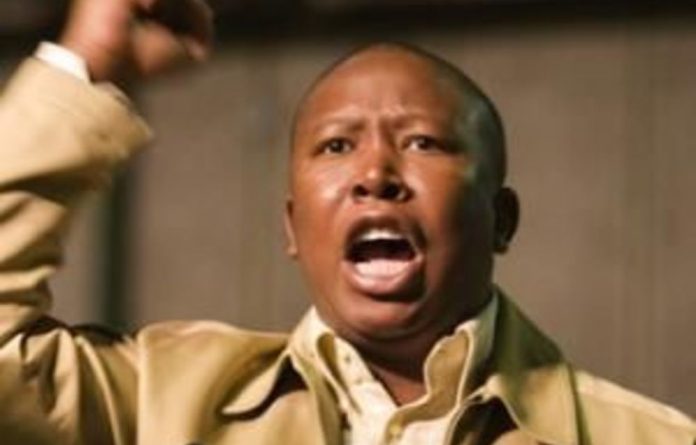 African National Congress Youth League (ANCYL) president Julius Malema’s racial outburst at a student rally will be taken up with him by the ANC, the party said on Wednesday.

Spokesperson Ishmael Mnisi said the party would “engage” with Malema on the statements he made on Tuesday, during its regular contact with the league.

“We are always in contact with the youth league, we will continue talking to them … even in this instance we would engage with them,” he said,

Malema, according to the Sowetan, led students at the University of Johannesburg in a song saying: “Shoot the boere [farmers], they are rapists.”

He told students that former president Nelson Mandela had convinced black people to forgive, but they should never forget what was done to them.

Mnisi said the ANC did not promote racist utterances.

“We wouldn’t appreciate any statements against any member of our society, including white people … they are also South Africans,” he said, adding that the Freedom Charter said South Africa belonged to all who live in it.

‘We have come to expect these kinds of insults’
Malema also lashed out at Democratic Alliance leader Helen Zille for demolishing churches in the Western Cape.

“Helen Zille, who is suffering from Satanism, has gone all out to demolish the churches in the Western Cape. She is exposing herself … people there will know they voted for a monster.”

“This Patricia, who goes around saying I owe Sars [South African Revenue Service], she must get her facts properly.

“She must go and build her own family and be concerned about the taxes of her husband. If she has got a husband. Patricia doesn’t look like a married woman. There’s no normal man who can marry Patricia. If Patricia has got a husband, that husband must divorce Patricia and come and look for well-mannered and beautiful women in the ANC.”

The ID, meanwhile, hit back at Malema on Wednesday for his “juvenile” attacks on De Lille.

“Behind the veneer of intoxication and madness lurks not a young lion,” said Young Independent Democrats leader Xanthea Limberg.

Malema’s personal attack on De Lille came as he failed “hopelessly to answer the tough questions about whether he is indeed stealing from the poor”, she said.

“The Young Independent Democrats is shocked that a young man of Julius Malema’s age would find it in himself to be so disrespectful to someone who has devoted more than three decades of her life to marginalised and ordinary South Africans,” Limberg said.

“Although we have come to expect these kinds of insults from Malema, it is no less shocking when he shows that he has no respect for elders that truly care for the poor.”

Disapproval
Mnisi said opposition parties should not be on the receiving end of derogatory statements.

“All that we are saying is that any derogatory, undermining statement, whether to opposition parties or our own people, we disapprove of them,” he said.

He said Oppenheimer was only looking after the interests of his family, adding: “… We must take from Nicky Oppenheimer’s family and give to the people of South Africa.”

Malema pronounced on the ANC’s 2012 succession race, saying President Jacob Zuma was guaranteed to return in his position when the party elects new leadership.

Last year, at a Congress of South African Trade Unions conference, Zuma urged ANC and alliance members to refrain from pronouncing on the 2012 elective conference.

Mnisi echoed this. He said it was “premature” for any ANC leader to discuss succession now.

“… We reiterate what we said before, we will encourage succession debate at the appropriate time … we continue to remind and plead with comrades that it’s not yet time to talk about the succession debate.” — Sapa