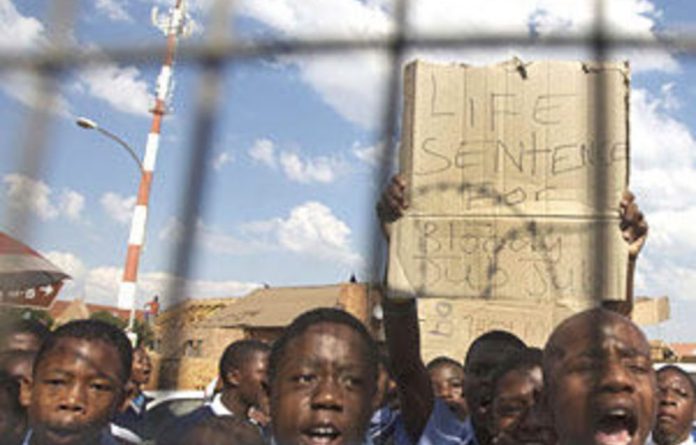 A police van transporting hip-hop star Molemo Maarohanye and co-accused Themba Tshabalala was pelted with stones by angry students as it left the Protea Magistrate’s Court on Wednesday.

Thousands of students from various Soweto high schools filled the streets in front of the court where Maarohanye, better known as “Jub Jub”, and his co-accused appeared on charges of murder.

They are facing four charges of murder, two of attempted murder, reckless driving and drunken driving.

They appeared before magistrate Brian Nemavhadi, who postponed the matter to March 17.

The pair, who remained in custody, will then apply for bail.

Maarohanye and Tshabalala allegedly killed four pupils on Monday during what was described as a drag-racing incident.

Miyelani Shabangu, a friend of one of the deceased pupils, said they want to see the hip-hop star and his friend go to jail for a very long time for what they allegedly did.

“We are not happy at all, he should be punished for what he did. We want him to go to jail for a very long time.

“I’m still hurting, Andile [Mthombeni] was a very good friend of mine,” he said.

He said he did not want the accused to be released on bail.

Sixteen-year-old Mthombeni was one of the four pupils killed in the accident.

Two other pupils were seriously injured in the crash.

The case was postponed to March 17 for further investigation. — Sapa