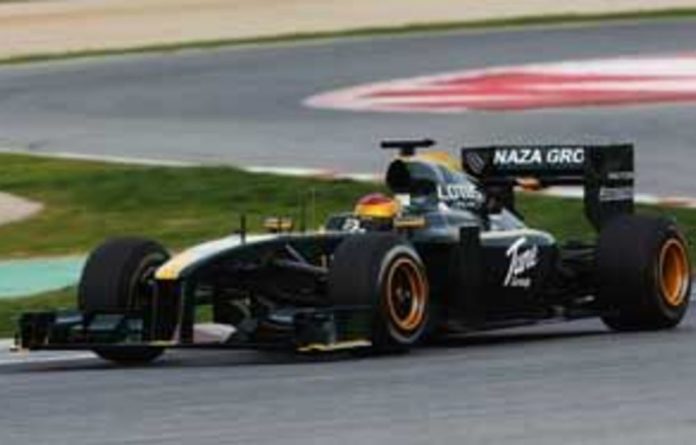 The iconic Lotus name returns to Formula One at the season-opening Bahrain Grand Prix this weekend, with modest ambitions for this year but big plans to seize a future world championship.

The Malaysia-backed team, wrapped in green and yellow livery recalling the marque’s 1960s heyday, has been revived by aviation tycoon Tony Fernandes after a 16-year hiatus.

“I think we’ve already accomplished more than anyone could have dreamt,” said Fernandes, whose team built the new T127 car from scratch in just five months.

“I firmly believe that if we continue on the growth path that we will be world champions one day without a doubt,” he told Agence-France Presse of the team, funded by a public-private partnership involving a string of Malaysian entrepreneurs.

“We’re not here to be second, we’re here to win. But we have to be realistic, we’re not going to win next year.”

Fernandes, the ebullient founder of Malaysia-based budget carrier AirAsia, is carrying the weight of history on his shoulders.

The original, and legendary, Team Lotus won six drivers championships and 73 races with the likes of Jim Clark, Graham Hill and Stirling Moss behind the wheel.

Fernandes admitted the team would be competing “at the back” in Bahrain.

“But to build 8 500 parts in five months and have a car that at the moment is four seconds off the pace … is amazing when you think we’re competing against teams that have been around for 70, 80 years,” he said.

To do that Fernandes has to beat fellow aviation mogul Richard Branson, who is launching Virgin Racing in 2010. The pair have a typically madcap cross-dressing bet on whose team will win out.

The outspoken tycoon shrugged off scathing comments from Ferrari, which has criticised the sport’s decision to allow four new teams onto the grid this season and poured scorn on the rookies’ testing times.

“It’s good when people laugh at you because they don’t take you seriously,” he said. “It doesn’t bother me at all, because you all have to have beginnings.”

Fernandes said that unlike other recent entrants such as Brawn and Force India, which were re-badged versions of established teams, Lotus Racing went from a standing start after winning its franchise last September.

“We’ve got a much harder task. We have to do everything from scratch. Brawn, (which) everyone is raving about, is actually Honda. So our task is much, much larger.”

In fact, Brawn has already switched badges and will compete this year as Mercedes, another works team returning to the sport after a long hiatus.

In the lead-up to Bahrain the Lotus car has battled problems with the hydraulics system, but drivers Jarno Trulli and Heikki Kovalainen have no complaints over the Cosworth engine, Fernandes said.

He said that costs were subsiding in the glamour sport, a positive trend for a team that has a tiny 40 million pound (60 million dollar) budget against some 200 million pounds for Ferrari.

“It is a fiercely competitive sport, to get half a second you need a lot of work. But I think with the right attitude and the right people and the way Formula One is going, it helps teams like us.”

Fernandes said that despite F1 tracks mushrooming around the world, the sport needs to do much more to become relevant to audiences outside its core base in Europe. — AFP

Branson to serve as AirAsia ‘stewardess’ after losing F1 bet

Thailand picks up the pieces after deadly conflict