Easy as pie, but tastier 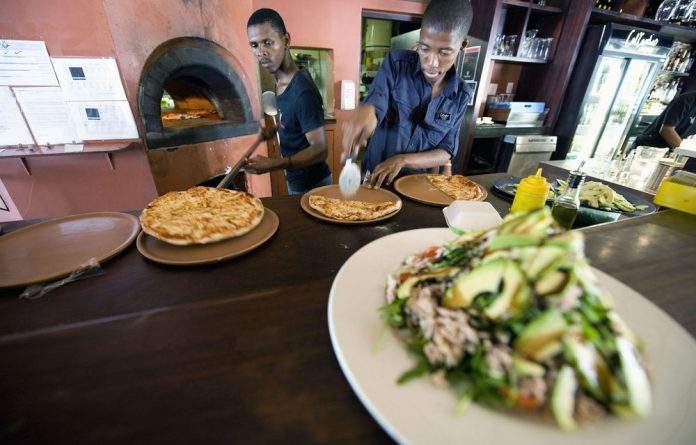 Pizza started out as a Mediterranean peasant’s version of pie: flat and without a filling. The plebs ate staititai, or pizza bianca as it is known today, a plain pizza with some goat’s cheese on top, perhaps a smidgen of honey.

In Roman times there were no tomatoes in Europe. The tomato arrived only in the 1600s with the discovery of the New World — pizza would never be the same.

As it turned out, the United States and capitalism (which turned peasants into consumers) created what we understand by pizza — an army of edible flying saucers, colonising every corner of the planet.

In South Africa the invasion commenced in the 1980s, when we discovered what prolific American entrepreneurs with prodigious appetites and childlike palates had known for years: pizza is the ideal franchise food. It is simple, fast, idiot-proof. Even the dough requires little skill, and whoever can’t master that can buy frozen bases from the wholesaler.

Much like conveyor-belt manufacturing, investors don’t need to employ qualified chefs, just an assembly line of commis. Exact ingredients and simple preparation (no hidden cooking costs and maestros taking liberties with the butter) make costing clear-cut and profitability easily achieved. For consumers it is a quick-fix, all-in-one meal. The word is universal too; it is pronounced “peet-sa” no matter what alphabet it is written in.

St Elmo’s opened in Sea Point in 1987. It now has more than 40 branches with outlets in Nigeria and Zimbabwe. In Cape Town Butler’s pizza delivery, started 20 years ago by the grandson of Lesley Faull, founder of Silwood Kitchen, is still going strong. Debonairs, established in 1991, today has 236 branches. There are more than 120 Scooters, more than 100 Roman’s franchises, Panarottis has more than 50. In our enthusiasm South Africa would enter the Guinness Book of Records for the biggest pizza ever made, 34,7m across, cooked up at the Norwood Hyperama.

Such mass production inevitably produces substandard goods: stale or doughy, under-baked bases smeared with sweet ketchup and covered in a nasty farrago of tinned ingredients that turn foul when cooked, all suffocated beneath a sheet of plastic “cheese” dripping toxic oil (some chains even have the gumption to advertise the indigestible elasticity of their yellow melt).

Consumers with more greed than sense have exacerbated this culinary catastrophe by demanding excessive numbers of toppings. You’re better off having your favourite things grilled each in their own time, served on a side plate. Even Italy was not immune; its legislature belatedly enacting European Union Traditional Speciality Guarantee laws for pizza. As of February 2010, Neopolitan pizza is trademarked. Among other specifications it must be stretched by hand (no rolling pin allowed) to form an uncooked base 8mm thick and cooked in an oven fired up to 500C.

Soon health officials started to blame pizza for sodium-besieged hearts and excessive saturated fats clogging arteries, dieticians and their fads became carbophobic and higher-end consumers turned pernickety. Diners began to demand quality bases, extra virgin olive oil, tomatoes with the right acidity, buffalo mozzarella and premium-quality toppings. A space opened up for a new kind of franchise, and it was filled by Col’Cacchio. It was the first pizzeria to list options on its menu with Heart and Stroke Foundation accreditation.

To begin with, unlike its competitors, Col’Cacchio has a great wine list. There is no central kitchen — all sauces and dressings are made fresh in the store. They claim to be MSG and preservative free. No frozen seafood mix here, but whole, juicy, shelled prawns. Weekly store visits and mystery diners keep the 18 nation-wide outlets on their toes.

The pizzas are thin crust and 31cm across. You can make your own pizza or do half and half (a surcharge applies). Among the dizzying array of choices (more than 50) are many vegetarian options, as well as wheat- and gluten-free bases. The stores recycle and separate their waste and they burn only alien wood, such as bluegum, in their pizza ovens.

Named on a whim, Col’Cacchio is Italian slang for “up yours”. Perhaps this is directed at its competition. Among the franchise outlets, it is, in my opinion, unequivocally the best.