Fear and loathing in Coffee Bay 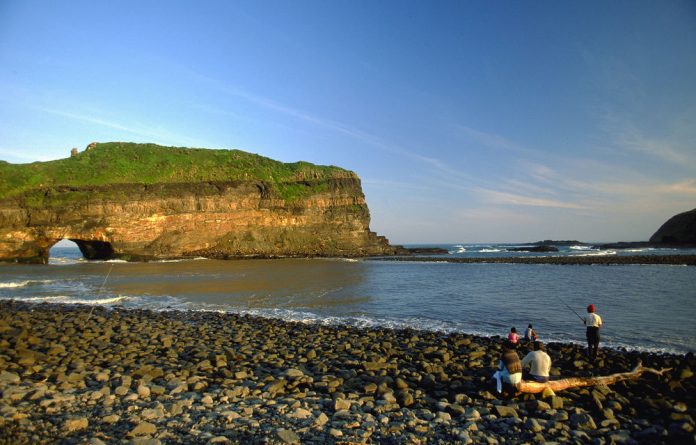 Eighty kilometres off the N2, 20km south of Mthatha, at the end of a once-tarred road with more potholes than concrete, lies a treasure of the Transkei: the seaside village of Coffee Bay.

On the way there, about three-quarters of the way down the road, a teenage boy stood in front of our zigzagging car, looked us in the eyes and swiped a finger across his throat, signalling that he would cut ours. An ongoing chorus of youths shouted in isiXhosa at our car as we crawled by, hoping our tyres would hold out against the battered road.

Coffee Bay’s landscape is dramatic, with sheer cliffs rising out of the swell and white beaches stretching out for kilometres north and south. It’s a beachcomber’s paradise, a popular spot for surfers, a seaside location with little of the commercial schmaltz typical of popular holiday destinations further up the east coast.

Realising the prospect for trade and tourism, a strong backpacking contingent exists in the area. Five nearby hostels (three in Coffee Bay and two more just outside) bring in foreigners by the busload, awed by the majesty of the landscape, eager to see the Hole in the Wall, on a daily rotation for a taste of Africa that a comparatively Westernised South Africa often denies.

This is as rural as rural South Africa gets, where cattle and donkeys abound around every corner and people live in huts made of mud and thatch. But where a foreigner might see the locals as living simple, unadulterated lives in pastoral and prelapsarian harmony, a Jo’burger’s take is naturally different. We understand the roots of the poverty and its perpetuation; we fear the seething anger we know is beneath it.

And yet what brings us here is the same thing that brings the Germans, Americans, Brits and Australians (we were two of only four ‘Saffers’ at the establishment we stayed at) — the lure of the beautiful, the natural and untouched.

When we arrived we were swamped by vendors peddling their wares, lured to the bay by the promise of white skins’ wealth: “I’m selling beads!”; “I’ve got mushrooms! Weed!”

“No, thanks, but thanks anyway.”

“Give me a cigarette. How about a beer? Small change? I’m hungry. My family is hungry.”

“We’re sorry. [Truly, but please do leave us alone. Stop making us feel bad, we’re on holiday. And could you please step a little further back, we left our pepper spray in the car.]”

Unsettled by the onslaught and unsure of our surroundings, we asked our newly acquired Australian neighbours how long they’d been there, whether they had encountered any problems and whether they felt safe.

We looked at each other and then over at a man who had 20 minutes before become angry with us when we declined to buy the ganja he was selling or to give him a beer as recompense. He glared back at us from under a tree a few metres away.

But slowly we stopped feeling threatened, as though this spectacular place was run by a code completely different to that of the city. Living in a country where poverty is rife, it isn’t shocking to see, but in Jo’burg we have high, electrified fences, burglar alarms and electric windows — barriers to shut us off from the plight of the desperately poor.

But here there are no barriers, people are at eye-level and, surprisingly, they won’t do much more than pester you. And, always politely, but like a pest, we ignored the overwhelming inequality and chose to bask in our glorious surrounds and be charmed by the huts dotting the hillsides.

We enjoyed our holiday, the days spent reading novels on empty beaches, swimming in clear waist-deep water 50m into the sea, sipping hilltop sundowners while the waves crashed 50m below us and listening to the roar of the ocean at night while staring up into a galaxy hidden by Jo’burg’s artificial light and smog.

Coffee Bay is in the heart of the Wild Coast — and it retains its untamed feel. People here live as they did 20 years ago, 40 years ago, 400 years ago, and I don’t know whether that’s a good thing or a bad thing. All I know is that in this most beautiful of landscapes that angry boy who threatened to cut our throats will become a man.