The horsepower and the glory 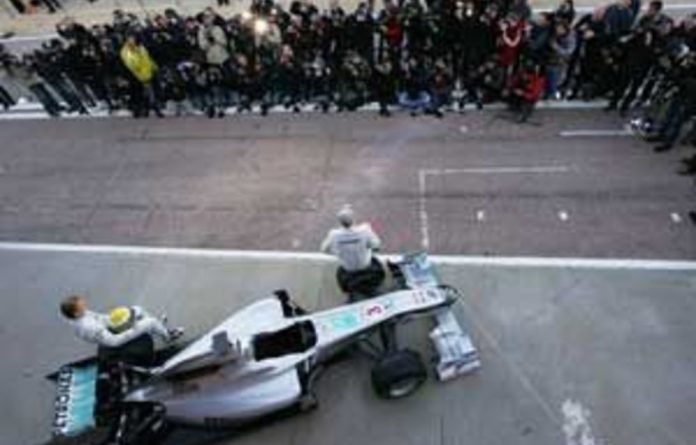 Who says it’s all about the cars? The eagerness with which the new Formula One season that gets under way on Sunday is being anticipated has nothing to do with double diffusers, longer wheelbases, transverse gearboxes or front-wing end plates. It’s about the drivers.

We no longer see their faces as they go about their work enveloped in fantastically complex machines that bear a greater resemblance to fighter jets than to the average family car. Only when they take off their helmets at the end of a race do we glimpse emotion. And yet it is still the human dimension that stirs the blood, that draws spectators to the great traditional arenas of the sport and persuades millions around the world to tune in to the telecasts.

Never, perhaps, has that been more true than on the eve of a season in which four of the contenders — Michael Schumacher, Fernando Alonso, Lewis Hamilton and Jenson Button — have won 11 world titles between them. The last time a quartet of champions raced together was in 1999, when Schumacher, Damon Hill, Jacques Villeneuve and Mika Hakkinen lined up on the grid. The difference is that all four seem likely to be competing for race wins, making the 2010 season potentially the most competitive in recent memory.

Of course there is excitement over the return of Mercedes-Benz to grand prix racing under its own name for the first time since 1955, interest in the implications of the ban on mid-race refuelling, a degree of anticipation over the arrival of four completely new teams, curiosity over a new circuit in South Korea and relief over the restoration of the British Grand Prix to Silverstone.

But nothing can overshadow the enthusiasm generated by the announcements of Schumacher’s return from a three-year retirement, of Button’s transfer to become Hamilton’s teammate at McLaren and of Alonso’s arrival at Ferrari.

After several seasons of scandals that damaged grand prix racing’s already battered reputation the circus has good reasons for optimism as it looks ahead to the start of the new series in Bahrain this Sunday.

Jenson Button, who captured the title in his 10th season in Formula One, helping the Brawn team to win the constructors’ championship at their first attempt, followed up his triumph by creating consternation when he announced his decision to join Hamilton at McLaren. Many experienced observers were quick to question the wisdom of challenging Hamilton in the team where the 2008 champion has spent half his life, believing that the incomer will inevitably find himself at a disadvantage over the Woking team’s favourite son.

Those close to the negotiations in both the McLaren and Brawn camps swear that money had no influence on the new champion’s decision. Brawn, having been acquired by Mercedes-Benz, was ready to increase Button’s 2009 salary quite substantially and its ultimate offer is said to have been higher than the figure he agreed with McLaren. Which leaves, as a former Brawn colleague said, only one possible conclusion: when Button says he was looking for a new challenge, rather than a bigger pay cheque, he is telling the truth.

What he will not admit in public is the sense of frustration created by suggestions that his championship was won by the car rather than its driver’s skill and experience. After finishing on the top step of the podium in six of the first seven races he stumbled through the second half of the season until, with a satisfyingly aggressive drive in São Paulo, he wrapped up the title. But still the whispers would not be silenced.

With Button in the McLaren garage at every race will be his father, renewing his acquaintance with Hamilton’s equally committed dad. Both fathers gave a great deal of time and devotion to support their sons’ careers and their first encounters came when John Button, who ran a company dealing in go-kart motors, supplied engines to Anthony Hamilton for Lewis’s use at a time when their boys, born five years apart, were moving through the junior ranks. But the temperamental differences between the two men could hardly be more obvious and are echoed in the contrast between their sons.

Observers will be watching closely for signs of tension between the laid-back, party-loving Buttons and the unremittingly focused, hugely ambitious Hamiltons.

At the launch Lewis remarked that in his karting days he had idolised Jenson, which was a generous thing to say about the man he must now beat to reconfirm his supremacy within the team. “The chemistry between him and me is completely different to how it’s been portrayed,” he said, playing down the suggestions of a personal rivalry. “Of course we want to beat each other but we want to get to the end of the season having won the constructors’ championship and with one of us having won the drivers’ title.”

Schumacher, who returns at the age of 41, looks extremely fit and ready for the challenge. Having won all his titles with Ross Brawn, two of them under the banner of Benetton and five at Ferrari, he would surely not have made his comeback unless convinced they could do it again with a car bearing the famous three-pointed star.

Mercedes, the engines of which provided the power for Hamilton in 2008 and Button in 2009, is used to dominating the grand prix scene and Schumacher, who drove the company’s sports cars before his promotion to Formula One, will be expected to live up to the legacy established at the wheel of the Silver Arrows by Rudi Caracciola in the 1930s and Juan Manuel Fangio in the 1950s.

Only the Scuderia Ferrari can match the aura of Mercedes-Benz. Like McLaren, Ferrari endured a miserable 2009 but simply gave up halfway through the campaign and turned its attention to this year’s machine, the F10. Whether the engineers can do better remains to be seen, as does the ability of Alonso to motivate them in the manner of Schumacher, whose hard work earned him the team’s undying loyalty.

The Spaniard is a complicated character, a man of sunshine and shadows. In the homely surroundings of Renault he won two titles. At McLaren he lost his equilibrium when faced by Hamilton’s refusal to bend the knee. “I’ve had a dream come true,” he said at the launch of the F10, “from karting, getting to F1, world champion, now driving for Ferrari.” If the dream is to continue, first he has to beat Felipe Massa, returning after last year’s serious injury for his fifth season with a team in which the little Brazilian feels completely at home.

Of all the likely championship contenders the least pre-season attention has been paid to Red Bull. Sebastian Vettel and Mark Webber go into their second season together knowing that virtually every other team has spent the winter copying significant elements of their 2009 car, in which the 22-year-old German won four races.

If Adrian Newey, their brilliant technical director, has managed to take another leap forward with the RB6, then the rest of the field may find themselves desperately playing catch-up as Vettel heads serenely towards what many believe to be his manifest destiny. —