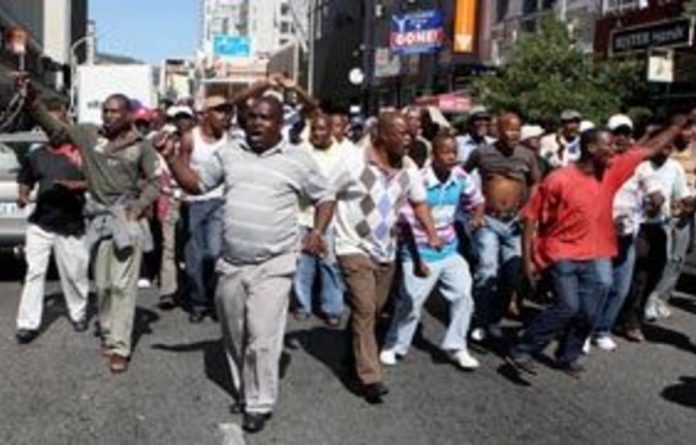 Four bus drivers were injured when their vehicles were stoned during a one-day taxi strike in Cape Town on Tuesday, amid rising tensions related to the roll-out of the new rapid bus system.

“They sustained minor injuries when stones were thrown at the buses. They received attention and they are not in hospital anymore,” said police spokesperson Andre Traut.

The strike in Cape Town follows protests in Johannesburg last week where police fired rubber bullets at striking taxi operators over the new bus system which is being introduced ahead of the Soccer World Cup.

Taxi associations claim they are being excluded from the global soccer showpiece but officials have denied this.

Earlier on Tuesday, Gauteng Provincial Transport Minister Bheki Nkosi said the notion that “the taxi industry has no role to play during the World Cup is unfounded and misleading,” he said in a statement”.

Regional transport top official Robin Carlisle said he was outraged at the stonings in Cape Town, which police believe are linked to the taxi strike.

“I am furious that the body [of taxi drivers] was involved in acts of violence and intimidation including pelting stones at buses,” he said in a statement.

“The warlords and bully boys in the taxi industry are its own worst enemies.”

“Whoever implements it, it will be over our dead bodies,” regional chairperson Mandla Mata told a meeting of 500 operators on Thursday, the Cape Argus reported.

Spokesperson Mvuyisi Mente told the South African Press Agency on Tuesday that the alliance was a non-violent organisation and could not be blamed for the stonings.

In Johannesburg some operators, like those associated with the United Taxi Association Forum (Utaf), claimed the government was taking over routes which they saw as their “intellectual property”.

By December last year, the Johannesburg council and the city’s taxi industry said 167 operators had agreed to take their vehicles off the road in return for compensation of over R3-million from the city.

Utaf spokesperson Ralf Jones said city was also clamping down on illegal taxis as a means to further the system. — AFP, Sapa