‘Through Feni I examine myself’ 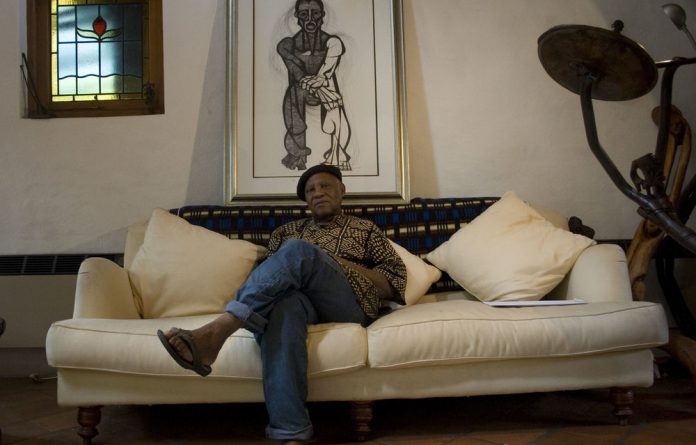 When Professor Pitika Ntuli — intellectual, cultural activist, artist and art collector — emerges from behind the creaking green electric gates of his Parktown North home, I notice his signature black beret tilted slightly to the right, over his forehead. He looks exactly the same as he did a decade ago.

“Welcome, welcome,” he says, extending his open right hand for an inevitable customary gesture of Ubuntu.

Hastily cutting greetings short, Ntuli leads me on an unsolicited but welcomed tour of his house, beginning with the garage, where stacks of mahogany-and-steel sculptures are piled up on top of one another, some complete and some under construction, contesting for space with his two cars.

Inside the house he leads me further into a few overly decorated rooms and a dusty workshop packed with his personal artworks and instruments before he says: “You will not find a place in this country with so many artworks [made by one artist] … even if it is by many artists, put together under one roof.”

On that note Ntuli does not hesitate to explain some of the details about his own exhibition, opening on May 10 at Museum Africa in Newtown.

All this, of course, occurs as a prelude to the reason I have made this trip to his house: his collection of artworks by the legendary Dumile Feni.

“You see that one,” he says, pointing towards a magnificent black-and-white untitled Feni on the wall, “and the one behind that heap of artworks? I got them in the United States in 1989, two years before Feni’s death.”

Ntuli says that, during Feni’s stay in the US, people were selling his work. Ntuli bought his Feni pieces through these agents.
“I have more Fenis stacked somewhere in the house. I know that Feni’s family also own a few of his works,” he says.

To Ntuli, possessing sought-after artworks is an inspiration unequalled by none.

“When you have works of art like Dumile Feni’s, you are in possession of his way of thinking — an insight into the human psyche, emotional and spiritual thinking,” he says.

Ntuli says every line that Feni drew resonates like a poem and that “with these lines you get philosophies and ideologies”.
Ntuli is worried that there could never be as good an artist as Feni again.

“Current artists are too repetitive. They are not pushing themselves harder. Previously, political oppression pushed artists to be more expressive. When the oppressor tried to take away their dignity, they used art to show that they are in fact dignified people and that they also held strong opinions.”

Feni’s work also serves as a source of introspection for Ntuli: “It is a way that I can examine myself as an artist. It also makes me question my abilities — whether I can attain such heights as Feni’s or not.”