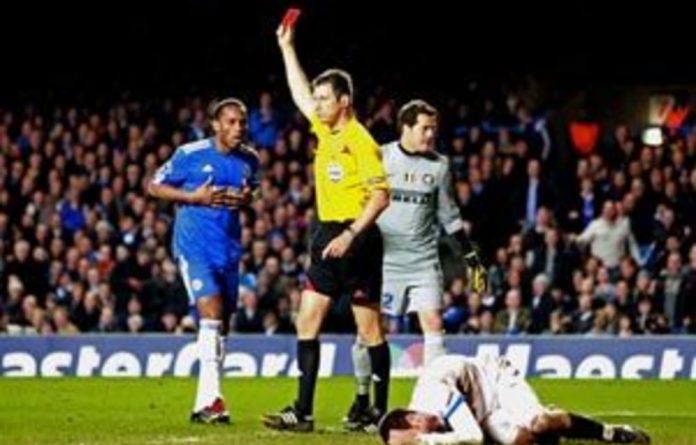 Chelsea will waive a potential appeal and accept the two-match ban imposed on Didier Drogba by Uefa following his dismissal in the Champions League defeat to Internazionale at Stamford Bridge.

The Ivory Coast forward was sent off by Wolfgang Stark, the German referee, for stamping on Thiago Motta’s ankle three minutes from full time as Chelsea slipped out of Europe, a violent conduct offence that carries a two-match suspension. He will miss the opening two group games in next season’s competition, for which the team appear certain to qualify.

Chelsea can challenge the decision within three days of receiving Uefa’s written reasoning, though they will instead accept the punishment as there had been fears the offence would prompt a four-match suspension.

Drogba had been warned as to his future conduct, banned for four games (later reduced to three) with a further two-match ban suspended after being found guilty of making “offensive comments” towards the referee Tom Henning Ovrebo following last season’s semi-final elimination against Barcelona.

European football’s governing body opted against activating that suspended punishment and, instead, extended Drogba’s probationary period by two years to July 2013 as the offence against Motta was deemed to be very different from his outburst against Ovrebo.

“The suspension applies to the next two Uefa club competition matches for which Drogba would be eligible,” a Uefa spokesperson said.

The player has drawn Uefa sanction after Chelsea’s elimination in each of the past three seasons — he was sent off in the 2008 final in Moscow — but insisted his stamp on Motta had been accidental, with Chelsea frustrated as Inter prevailed 3-1 on aggregate in the last-16 tie. “The referee was a bit hard on me for this red card,” Drogba said at the time. “I stepped on his tendon but it was not intentional.” —