A few years ago I stood with my family on a nondescript mound of bush and stones in the Holy Land. A small plain of arable farmland lay in front of us, green with crops.

Beneath our feet, according to the leaflet in my hand, were the residues of armies that had occupied the plain during the previous 20 000 years.

Young soldiers in the woods below stood round their tanks. Incessant thunder from fighter jets rumbled in the sky. The newspaper under my arm carried a fierce debate: should nuclear missiles be launched against a hostile neighbouring state?

Things were, I suppose, much as they’d always been at Armageddon.

A few hours’ drive away we stood again on a mound, a hill beside a lake. The sun gleamed greyly on the water while fishing boats lowered and raised their nets.

Behind us people from South America were singing. Others, mostly from the East, walked slowly along a path, dabbing their faces with handkerchiefs. A woman on a bench was praying.

Things were, I suppose, much as usual in Galilee.

The landscape was far more crowded than in the past. Washington had taken the place of Rome, but a profoundly subversive poetic vision first uttered in this place some 2 000 years ago was still reverberating.

Poetic visions are intrinsic to religion. Such visions energise Christianity, Islam and Hinduism, Judaism, Buddhism and other faiths. Founding epiphanies typically occur during a time of withdrawal from the world by a believer already living a life examined in meditation and informed by prayer.

Ntsikana, the 19th-century Xhosa prophet, for example, sits alone near his cattle byre at dawn and during a moment of exultant insight composes a monotheistic hymn (his “Great Hymn”) still sung today. 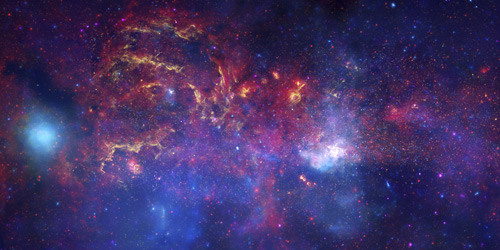 Epiphanies are also intrinsic to science, although their language is primarily mathematical.

The “eureka moment” is well documented. It occurs when a scientist suddenly discovers an organising principle that makes sense of data gathered during research.

Newton flashed on gravity that way, Darwin on evolution, Hubble on the expanding universe and Einstein on the relationship between energy, mass and time.

Does science discover immutable laws? Scientists produce verifiable and incomplete models of understanding. These change with improvements to technology and the application of discoveries and paradigm shifts in other fields. Science mutates.

Cosmologists discarded Newton’s vision of a static, eternal universe through which the stars and planets moved like stately clockwork. Cosmogenesis, the current model, posits instead a dynamic universe that had a beginning and whose formulating constituent is energy, not mass.

I find it needs a leap of faith to look up over my roof at night and believe that the moon, the stars and the billions of unimaginably huge galaxies scattered across the cosmos exploded from a dot of energy much smaller than a pinhead.

Then follow the thoughts that science generates and poetic vision grapples with: why does the universe exist; what sustains the energy of the whole; why do tiny conglomerations of molecules on Earth ask such questions?

“There are more things in Heaven and Earth,” says Hamlet to his intellectual friend, Horatio, “than are dreamt of in your philosophy.”

I’m sure that Shakespeare would have relished the discovery of quarks, genes and invisible whirlpools in space. He would have laughed out loud to hear that our forebears were sponges, worms, shrews and apes. His comic vision would probably have treated evolution with saving irony, unlike Darwin’s disciples. His tragic vision is still empirically accurate: biologists believe that human evolution is on a plateau.

Evolution isn’t a science. It’s a history, a holistic, explanatory and cogent history of life on Earth based on scientific principles.

Each creature is, as it were, the alpha-and-omega of a lifeline of predecessors that stretches back to the genesis of terrestrial life.

The Earth was compacted by gravity from the dust of a star. The physics and chemistry of the stars, each lifeline on Earth as well as human consciousness were shaped in the mystery of a founding event whose echo still booms across the universe.

A split second ago in cosmic time our human lifeline unfolded the cerebrum, a brain much larger than that of other mammals. This sits above the older brain stem. Both evolved within the sun-energised water, soil and air around the planet called the biosphere.

The cerebrum filters, analyses and stores a stream of signals. These originate in the outside environment as well as inside the brain. Within itself the cerebrum retrieves and contrasts memories, postulates action and imagines the consequences in advance of the act to guide survival.

Neuroscience makes this clear. We are anatomically predisposed to snarl with fear, desire and rage as well as to think, doubt and yearn for meaning beyond our physical selves in love and prayer.

What poetic visions defy a world in which laissez-faire capitalism and its troubled handmaiden, secular education, elevate instrumental reason into a god that represses the poetic within us and ravages water, soil and sky?

This one coalesced in prayer: Earth is the Holy Land. And this: blessed be the biosphere.

If the biosphere be not sacred to human beings, what is?

Chris Mann is professor of poetry at Rhodes University and author of Lifelines (UKZN Press). www.chrismann.co.za