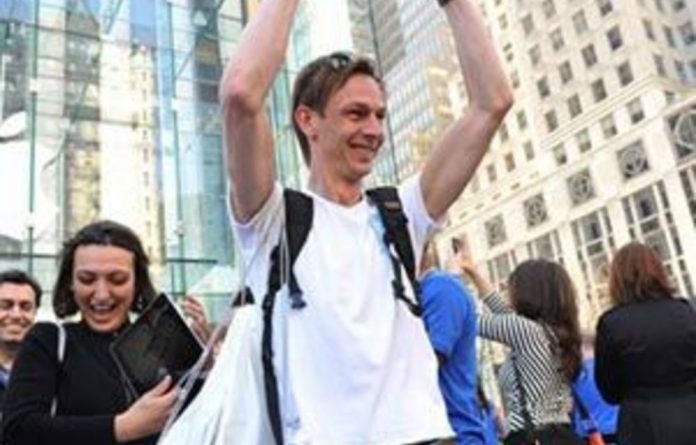 Apple’s iPad hits store shelves on Saturday after months of intense buzz, giving shoppers their first chance to decide whether the tablet device is worth all the breathless publicity.

At Apple’s flagship store on Fifth Avenue in New York City, cheers went up as shoppers finally entered the store at 9am (1pm GMT), emerging a few minutes later carrying the first iPads, a device touted as a bridge between a laptop and smartphone.

Toni Di Giorno (66) from Pittsburgh, Pennsylvania, said she had waited in line since 5am on Friday with her daughter and granddaughter. “They were really excited about getting an iPad,” she said.

Wall Street is curious to see if the device — which went on sale at the company’s more than 200 retail outlets in the United States, along with many Best Buy stores — can win a mass following and will be monitoring crowds this weekend to gauge its appeal.

Crowds built steadily at stores around the country beginning early on Friday, with shoppers waiting at locations in New York, Washington, Boston and San Francisco. But the lines were noticeably shorter than those that ushered in the iPhone in 2007.

In Richmond, Virginia, about 100 people gathered at an Apple store, drinking coffee and mingling in a festive, holiday atmosphere.

Matt Reidy, IT director at a company called snagajob.com, said he got there at 1am and was first in line. “My wife thinks I’m crazy,” said Reidy (43). “She said I’d be the oldest person out there.”

Indeed, with many able to pre-order the gadget since mid-March, there was little reason to stand in line before Saturday’s launch. Those who ordered early enough online get their iPads on Saturday, via pick-up at a store or home delivery.

Much at stake
Apple unveiled the iPad in January after months of fevered speculation, and its stock has risen steadily over the last two months.

It has plenty riding on the iPad, which it calls a new category of device: a lightweight media consumption device that tries to fuse the best attributes of a smartphone and a laptop.

The iPad’s touchscreen measures 25cm. At 680g, the device resembles an oversized iPhone and runs on the same operating system. It starts at $499 for a short-range Wi-Fi model, topping out at more than $800 for a 3G-enabled version.

The iPad is designed for using media of all sorts, including games, video, pictures, electronic books and magazines. It can access roughly 150 000 already existing iPhone apps, as well as new ones freshly designed for the iPad.

Apple is also launching its own digital book business to compete with the Kindle from Amazon.com Inc and other e-readers and e-books.

The iPad is the first in a wave of lightweight tablet devices that are expected to hit the market later this year from rival vendors, including Hewlett-Packard and Dell.

The big question is whether the iPad can attract a mainstream following beyond the first few months of excitement and into next year.

Technology enthusiasts have praised the iPad’s beautiful screen and fast web browser, but also have pointed out some missing pieces. It lacks a camera, cannot run more than one app at a time, and it cannot view popular video sites that use Adobe’s Flash software.

Reviewers at the New York Times and the Wall Street Journal said the iPad works nicely for web surfing and multimedia — but may appeal less to people who need computers for more heavy-duty chores.

Saturday’s iPad launch is only in the United States, and only for the Wi-Fi model. It will be available in nine other countries later this month. – Reuters