Terre’Blanche killed after row with workers 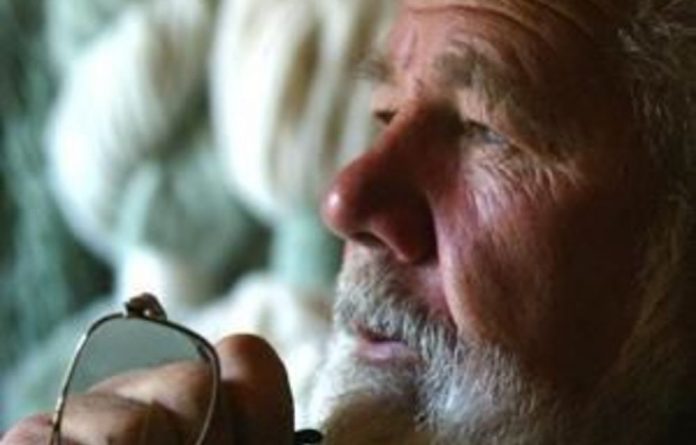 Eugene Terre’Blanche, who once threatened to wage war rather than allow black rule in South Africa, was hacked to death at his farm on Saturday following an argument with two employees. Terre’Blanche’s mutilated body was found on his bed along with a panga and a knobkerrie, police said.

“He was hacked to death while he was taking a nap,” one family friend, who did not wish to be named, told Reuters.

Local media quoted a member of Terre’Blanche’s Afrikaner Weerstandsbeweging party (AWB) as saying that the 69-year-old had been beaten with pipes and machetes. Police said two males, thought to be workers on the farm, have been arrested and were expected to appear in court on Tuesday.

Terre’Blanche, with striking blue eyes and white beard, was the voice of hardline opposition to the end of racial apartheid in the early 1990s, and the AWB was infamous for its swastika-like symbols and neo-Nazi anthems. But he had been in relative obscurity since his release in 2004 after a prison sentence for beating a black man nearly to death.

Last year he attempted a comeback, announcing plans to rally far-right groups and to apply to the United Nations for a breakaway Afrikaner republic.

His death comes amid heightened racial tension in South Africa, where Julius Malema, leader of the youth wing of the African National Congress, has caused anger by singing a struggle song with the words, “shoot the boer”.

Civil rights groups say that 3 000 white farmers have been killed since the end of apartheid and accuse Malema of inciting further violence against them. Last week a high court banned Malema from repeating the lyric but he did so on Saturday during a visit to Zimbabwe.

Police in the North West province said on Saturday night that Terre’Blanche had been attacked and killed at his farm 10km outside Ventersdorp.

Captain Adele Myburgh said Terre’Blanche was attacked by a man and a teenager who worked for him after they allegedly had an argument about unpaid wages at about 6pm, the South African Press Association reported.

“Mr Terre’Blanche’s body was found on the bed with facial and head injuries,” Myburgh said. “There was a panga on him and knobkerrie next to the bed. A 21-year-old man and 15-year-old boy were arrested and charged for his murder. The two told the police that the argument ensued because they were not paid for the work they did on the farm.” She added that Terre’Blanche was alone with the two workers at the time of the attack.

Terre’Blanche founded the white supremacist AWB in 1970, to oppose what he regarded as the liberal policies of the then South African leader, John Vorster. His party tried terrorist tactics and threatened civil war in the run-up to South Africa’s first democratic elections in 1994, won by the ANC and Nelson Mandela, who became the country’s first black president.

In 1998, Terre’Blanche accepted “political and moral responsibility” before South Africa’s Truth and Reconciliation Commission for a bombing campaign to disrupt the 1994 elections in which 21 people were killed and hundreds injured.

Bluster
Terre’Blanche’s credibility as a political leader collapsed after the anti-black threats voiced by the extreme white right proved to be little more than bluster. Revelations of his extramarital affairs also undermined his reputation with religious Afrikaners. He was jailed for assaulting a black petrol attendant and the attempted murder of a black security guard, serving three years of a five-year term before his release in 2004.

He said last year that he had revived the AWB after several years of inactivity and that it would join with like-minded forces to push for secession from South Africa. “The circumstances in the country demanded it,” he told the Mail & Guardian.

“The white man in South Africa is realising that his salvation lies in self-government in territories paid for by his ancestors.”

Terre’Blanche said he wanted to organise a referendum for those who wanted an independent homeland, where English would be an accepted language along with Afrikaans. “It’s now about the right of a nation that wants to separate itself from a unity state filled with crime, death, murder, rape, lies and fraud.”

Political analysts say that white extremists have little support, but more than 21 members of the shadowy Boeremag remain on trial for treason after being arrested in 2001 and accused of a bombing campaign aimed at overthrowing the government.

President Jacob Zuma, who took office in May, has courted Afrikaners at a series of meetings, assuring them they have nothing to fear from his government. Last week he visited an impoverished white community near Pretoria.

‘Malicious lies’
Meanwhile, the Young Communist League of SA (YCLSA) said on Sunday that the DA was spreading malicious lies about the murder.

“The YCLSA has noted with contempt how the DA has been prompt in spreading malicious lies about the circumstances surrounding the death of Eugene Terre’Blanche,” said spokesperson Gugu Ndima.

“Such premature distortion and sensationalisation by the DA will instigate what they supposedly fear. It’s complete absurdity to simplistically insinuate that two aggrieved workers merely heard the song Dubula ibhunu and resolved to murder Terre’Blanche,” she said.

Ndima urged police to deal with the case promptly.

“It is imperative that this case be left in the hands of authorities and not be utilised as a political platform for DA or any other political organisation to drive its narrow agenda.

“We call for everyone to remain calm and use common parlance in the process of analysing the circumstances surrounding Eugene Terre’Blanche’s death; especially those that would want to now go on a rampage to unnecessarily murder innocent people who had nothing to do with the murder,” said Ndima.

DA leader Helen Zille on Sunday called on leaders to band together, call for calm and reject “hate speech” such as songs that include the lyrics, “kill the boer”.

“The singing of songs such as “kill the boer” creates a climate in which violence is seen as an appropriate response to problems, whether personal or collective,” said Zille.

She also asked South Africans at large to reject incitements and threats of violence. – Sapa, guardian.co.uk