The next link in the chain 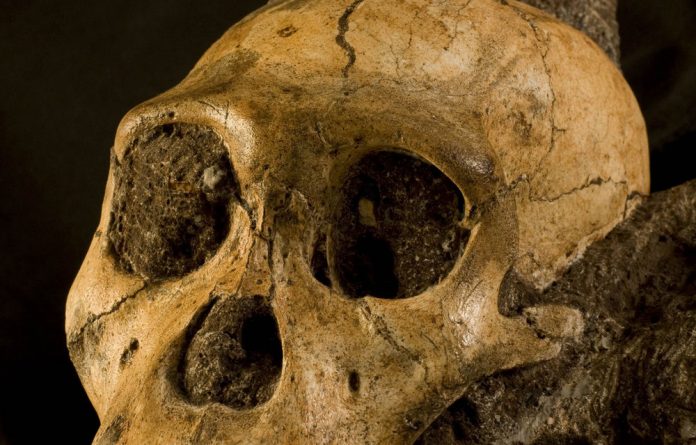 Professor Lee Berger unlocks the heavy safe in the offices of Wits University’s Institute for Human Evolution, gingerly removes a plastic case and opens it. Inside lies an almost perfectly preserved fossil skull, ivory against a grey matrix of breccia.

There is a slight eeriness as Berger, the voluble modern scientist, poses with it for the camera. A young male, perhaps 10 years old when he died, last looked out of these eye sockets about 1.9-million years ago.

The head is small, once holding a brain the size of a grapefruit. Yet the face is surprisingly advanced ­- with a definite nose and humanoid anterior dentition and without the dished facial contour of South Africa’s most famous ape-man, Australopithecus africanus.

Breathtakingly complete and undistorted, it is part of a fossil skeleton in equally pristine condition unearthed by Berger and with colleagues from a de-roofed cave system in Gladysvale, in the Cradle of Humankind, that escaped the depradations of lime miners a century ago.

Found just below him in the rock face were similarly preserved remains of a female in her late 20s or early 30s. The geology tells us that they died at the same instant, suggesting that they could have looked into each other’s eyes and may even have been related.

We were making the acquaintance of Australopithecus sediba, a previously unknown hominid species, whose discovery in 2008 has set the scientific world alight.

The find was formally announced at Maropeng, in the Cradle of Humankind, on Thursday, at a function attended by South Africa’s deputy president, Kgalema Motlanthe, other government ministers, scientists and the world’s media.

The world’s foremost scientific journal, Science, will feature the find as a cover story. Some 60 scientists have joined the Sediba project which, because of the prolific fossil deposits at the Gladysvale site, will continue for many years.

Interviewed this week, Berger said that in a single block of stone, he had found more hominid fossils than he had in his previous 19 years in the field.

Why the extraordinary excitement? Berger emphasised that “compared with everything found elsewhere in the quest for human origins on this continent, the discovery is utterly unique”.

“Hominid fossils are among the rarest objects on Earth — you’re talking about a few thousand fragments across the whole of Africa.”

The Gladysvale skeletons, about 40% recovered, were more complete than that of the famed “Lucy” and in an “unprecedented condition”, making it possible to conduct more in-depth research.

For the first time a complete limb bone had been unearthed. Another highly significant discovery was of bones in articulation.

But the deeper significance lies in what A sediba may tell us about the where and how of human evolution. Berger suggests that it could turn out to be “the Rosetta stone that opens up the Homo genus”.

Since the Lucy discovery in 1978 East Africa has gained ground as the true cradle of humankind, with South Africa’s australopithecines sidelined in some circles as an ­evolutionary dead end.

What has set the scientific community abuzz are indications that the new species may be transitional between Australopithecus africanus — to which the Taung child and “Mrs Ples” belonged — and the Homo genus, which encompasses the Turkana Boy (Homo erectus) found in Kenya, Neanderthals and ourselves.

Current thinking on the link is “a muddle”, Berger said. “The record is very fragmentary, contradictory and difficult to understand.”

A sediba may point to a simpler and clearer evolutionary connection between australopithecines and the human family than anything else on offer — and in so doing, could swing the theoretical pendulum back southwards.

In addition, Berger emphasises that evolutionary theory has frequently been faulted for the lack of intermediate species in the fossil record.

Physically, they appear to be transitional. As described, the skulls have archaic and modern aspects, including more advanced front teeth and back teeth suggestive of australopithecines.

The forearms are as long as those of orang-utans, indicating that they remained strong climbers, while the pelvis points to an ability to walk in a relatively modern way.

Berger also lays heavy emphasis on the evidence for reduced sexual dimorphism in A sediba, another modern feature. At 1,3m, the young male and the female are the same size, suggesting that on reaching full adulthood the male would have been a mere 12% to 14% taller.

In evolutionary terms the levelling of the sexes was a great leap forward, he said, facilitating a shift from the typical primate pattern of the dominant male and his female harem, while making for less antagonistic and more cooperative relationships among males. “We’re effectively feminised primates,” he said. “It’s what made us the most peaceful ­species.”

A sediba’s tiny Mrs Ples-like brain — about 400 cubic centimetres, a third of the size of its modern human counterpart — could also have important implications for evolutionary theory.

In the received model, anatomical change piggy-backed on prior changes in brain and behaviour. But the new species suggests the contrary: that the ability to operate on the ground predated, and perhaps drove, brain development.

The story of Gladysvale — starting with Berger’s decision to re-explore the area using Google Earth — is also the story of the rebirth of the Cradle of Humankind as a palaeological treasure-house.

With the growing paucity of finds in an area many thought was mined out, there were proposals that the Wits department should begin focusing on laboratory analysis of its existing fossil collection rather than on fieldwork.

In addition to the further hominid fossils he is certain Gladysvale holds, the site has yielded the fossil remains of sabre-toothed cats, antelope, brown hyena, tortoises, birds and mice — all cemented together in close proximity.

The theory is that animals fell into a vertical site 30m to 50m deep, where their bodies were washed into an underground lake or pool and that water may have aided their preservation.

Sediba is seTswana for fountain or well spring. It captures both the ancient setting — and the hope that the discovery will invigorate and deepen the search for human origins.