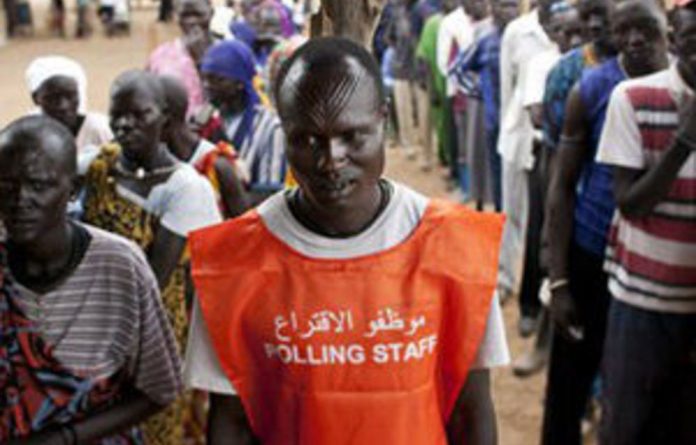 With lines of voters hunkered down for hours on makeshift benches or sheltering under trees from the baking sun, Sudan’s complex and controversial elections got off to an often chaotic start.

Officials had spent months preparing for the polls, but confusion soon erupted on Sunday as centre after centre, sometimes hours into the voting, discovered that voters were using the wrong ballot papers or that names or symbols of candidates were either missing or incorrect.

Given that votes are being cast for two presidents, 24 governors and 26 state and national assemblies, using three different voting systems and up to 12 ballots, things were bound to go awry.

Many opposition parties boycotted the elections, citing widespread fraud before the voting even began.

The National Elections Commission had insisted it was ready, despite demands from the opposition for a short delay to ensure the process ran smoothly. Mokhtar al-Asam, a top official, said on the eve of voting that the electoral system was “foolproof”.

It was a novel experience for many voters, and for election officials.

Some were too nervous to ask voters to dip their fingers fully into indelible green ink — used to show that people had cast their votes — and had to be reminded of the rules.

Quite which ballot papers to use also posed a problem for some election officials.

‘Running out of ballots’
“We’re running out of ballots,” one shouted down the phone, urging Sudanese observers not to worry — until he discovered the parliamentary ballots he had been using for the past four hours were from a different constituency and voting was halted.

That centre was brimming with policemen, who had waited for almost four hours to vote. Their presence worried some of the monitors. Other centres had line after line of soldiers pushing to get in the door.

“There’s only one national party in this country — the National Congress Party,” one of a group of soldiers, sitting in the army lorry which had brought them to vote, said in reference to President Omar Hassan al-Bashir’s party.

Al-Bashir is widely expected to win another term and his party is accused of rigging the vote and intimidating competitors.

One of the opposition complaints was that election officials had allowed all of Sudan’s numerous security forces to register to vote at their barracks.

Many felt their heavy presence in these areas could tip votes towards the ruling party because voters felt intimidated.

Voting booths were made of cardboard and many were already looking ragged on the first of three days of polls.

Ill-trained local monitors watched carefully but few noticed basic errors such as the use of incorrect ballots.

Voting was a difficult task even for those with a seasoned political eye — it took Al-Bashir 10 minutes to cast votes on his eight ballots.

The confused scenes in some stations in Khartoum prompted many to wonder what was happening in the more remote parts of Africa’s largest country, where illiteracy rates are high and decades of civil war have devastated infrastructure.

Despite the problems, many Sudanese insisted on voting. After a quarter-century without free elections, they saw the event alone as historic, despite the boycotts and complaints.

“Even if this is 50% right it’s better than nothing,” said voter el-Fatih Khidr. – Reuters