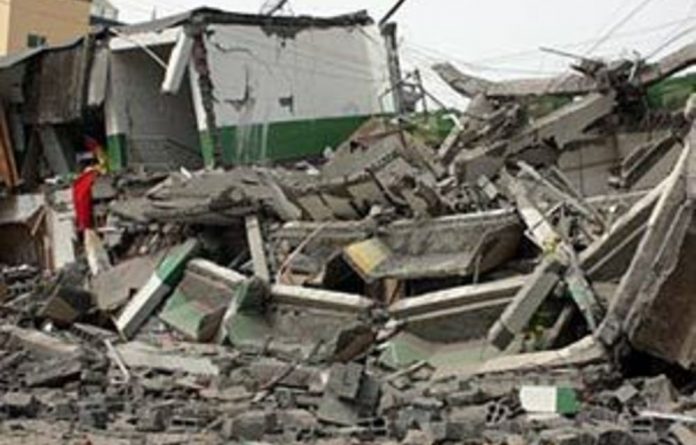 A strong earthquake hit a remote mountainous area of China on Wednesday, killing about 400 people and injuring thousands as it toppled mud-and-wood houses and at least one school, burying many in rubble.

About 10 000 people were injured in the quake of at least 6,9-magnitude, which also disrupted telecommunications, knocked out electricity and triggered landslides in the north-western province of Qinghai, local officials said.

Rescuers were working with their bare hands to clear debris and find survivors from the rubble, with children said to be among the casualties.

About 400 people have been confirmed dead, Xinhua news agency reported, quoting Huang Limin, a top official in the Yushu prefecture where the quake was centred.

“The injured are everywhere in the street, a lot of people are bleeding from head wounds,” Xinhua quoted another local official, identified as Zhuohuaxia, as saying from the town of Jiegu.

The quake wreaked havoc on the flimsy earth and wood houses near the epicentre — a high-altitude area near the border with Tibet and at least 12 hours by road from the provincial capital.

But some sturdier concrete structures also were toppled, according to images broadcast by state television.

Among the casualties were children trapped under the rubble of at least one collapsed school in the town, seat of the Yushu government and near the quake’s epicentre, with Xinhua reporting at least five students had died.

“There are about 20 children buried in the debris,” Kang Zifu, a local fire department official, was quoted as telling state television.

“We’re hurrying to help them … We’re also working on the Jiegu commerce and industry department office, where there are about 40 to 50 people buried. They are alive, and we’ve had contact with them.”

It was not immediately clear how many schools had collapsed.

Kang said at least 32 people had been pulled alive from debris in Jiegu.

Zhuohuaxia said more than 85% of houses had collapsed in Jiegu.

“There is a big crack in the Yushu Hotel and the four-storey meeting hall of the prefecture government has collapsed,” he said.

About 700 soldiers have been sent to look for survivors, and more than 5 000 other rescuers will be dispatched to the zone, officials in Qinghai said, according to Xinhua.

“We have to mainly rely on our hands to clear away the debris as we have no large excavating machines,” said Shi Huajie, a paramilitary police officer working on the rescue operation. “We have no medical equipment either.”

The US Geological Survey (USGS) put the quake at a magnitude of 6,9 while the China Earthquake Administration measured it at 7,1, saying the extensive damage included cracks in a dam.

The USGS said the quake hit at 7.49am local time and was centred 380km south-southeast of the city of Golmud, at a depth of 46km.

A series of aftershocks later rattled the area, with magnitudes of up to 5,8, the USGS reported.

The remote high-altitude region is prone to earthquakes. Its economy is based heavily on farming and livestock herding by its overwhelmingly ethnic Tibetan population.

A massive 8,0-magnitude quake in May 2008 in neighbouring Sichuan province devastated a huge area of south-western China, leaving at least 87 000 people dead or missing.

“The houses here are almost all made of wood and earthen walls. Some collapsed when the quake happened,” Karsum Nyima, deputy director of the news department of Yushu TV, was quoted saying by Xinhua. –AFP