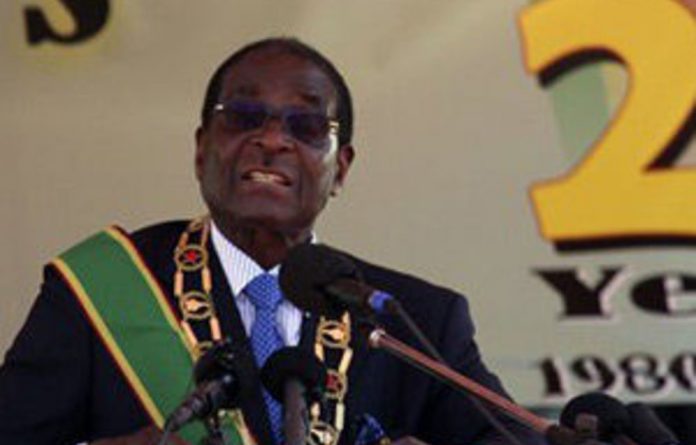 When will all this end? It’s a common refrain in Zimbabwe. “Only when the old man goes,” said Tinaye Garande, a street vendor.

Zimbabwe on Sunday marks 30 years of the rule of President Robert Mugabe, swept to power during the country’s heady and optimistic independence in 1980. Three decades later, the country — once an agricultural powerhouse and educational beacon — is mired in a continuing political stalemate and an impoverished, stagnant economy.

Garande (27) sells cheap sunglasses and trinkets in a parking lot outside a suburban Harare store. He is of a generation known as the “born frees” who never suffered under British colonial rule.

But the unkempt Garande, with worn clothing and untended dreadlocked hair, knows the hard life. He lost his menial job at a paper and packaging firm when it went broke in the economic meltdown four years ago.

He has two children and like many Zimbabweans educated in Mugabe’s post-independence boom in schools and health services — making “born frees” some of the best taught and healthiest students in Africa — he battles to survive and blames Mugabe for blocking real improvements in living standards.

It is still an offence to publicly insult Mugabe — several cases are pending in the courts — and Zimbabweans know it.

“Surely it is time for him to enjoy retirement,” said Garande guardedly.

But Mugabe (86) who dyes his hair unnaturally black and still walks with a spring in his step, is going nowhere. The ascetic former school teacher holds a firm grip on his Zanu-PF party that in December chose him to lead it for another five years. And he has no plans to yield the reins of state power, said John Makumbe, a political scientist at the main University of Zimbabwe in Harare.

“He is afraid of the consequences of leaving office, he wants to die there,” Makumbe said.

Critics say Mugabe, a political leader of the guerrilla army that ended white rule in 1980, has shown a toxic streak in his character all along.

“He is like a chameleon who looks good when things are going well but now the dark side is showing,” he said.

He had been viewed favorably in the West for the strides in education and health services in the 1980s that gave Tinaye Garande and his classmates Africa’s highest literacy of more
than 80%.

But schools and social services collapsed in recent years.

Thousands gather for celebrations
Traffic clogged the streets at Harare’s National Sports Stadium on Sunday morning as thousands of Zimbabweans gathered for the main celebrations.

Brian Kasunzumuma, a 27-year-old vendor, said he attends the independence celebrations every year.

“[I come] to celebrate independence my last heroes fought for,” he said.

“I come here every year to celebrate independence as a Zimbabwean.”

Mugabe is scheduled to give the keynote speech with his rival in the power-sharing government, Prime Minister Morgan Tsvangirai, looking on.

The stadium was decked out in Zimbabwean flags, but people attending the celebrations wore their normal street clothes after a warning earlier in the week that political posters and party gear would not be allowed at what has been billed as a national event.

Calls to face trial
Human rights organisations have called for Mugabe to face trial at the International Criminal Court on charges of political violence, vote-rigging and human rights violations by state agents over the past decade. The allegations stretch far back: groups say Mugabe should be held responsible for the massacre of up to 20 000 civilians by loyalist troops who crushed an armed uprising against him in western Zimbabwe soon after independence from 1982 to 1987.

In 2000, Mugabe ordered the often-violent seizures of thousands of white-owned farms that disrupted the agriculture-based economy and led to acute food shortages and world record inflation. He argued the programme corrected colonial era imbalances in land ownership.

Bespectacled and always impeccably dressed in suits with colour-matched neckties and breast-pocket handkerchiefs, Mugabe insists Western sanctions caused the economic collapse. A scholar with a string of academic degrees, he speaks perfectly British-accented English interspersed with the local Shona language and has admitted being an “anglophile” despite his avowed hatred of British colonial rule.

Western embargoes include financial and travel bans on him and his associates.

Before the visa restrictions that sparked his growing isolation, Mugabe often visited his London tailor and the upscale Harrods department store in the British capital.

Mugabe counts among his dwindling international supporters such pariahs as Hugo Chávez of Venezuela and Iran’s Mahmoud Ahmadinejad, scheduled to be his guest of honour at a trade exposition in the second city of Bulawayo on April 23.

Crippled coalition
A recent hoax on Facebook said Mugabe was looking for friends to join him in “fighting imperialism”.

Despite a yearlong coalition between Mugabe and the former opposition Movement for Democratic Change (MDC) critics blame Mugabe for holding out against reform.

Disputes between Mugabe and Tsvangirai have crippled the coalition government. In the latest, the MDC said this week laws to take over 51% of mostly white businesses that scared away much needed investment were scrapped.

Mugabe declared that incorrect the next day, saying such reports were “peddled” by hostile media.

Farm seizures that enriched cronies but were disastrous to the economy didn’t win the last elections outright for Mugabe in 2008, forcing him to enter the coalition with Tsvangirai, said Makumbe, the political analyst.

The spoiler
He said with new elections proposed under the coalition agreement, possibly early next year, business takeovers would not work either.

Mugabe has been described as “the spoiler” in the coalition and likened to a sportsman who intentionally kicks the ball off the field of play to buy time while his elite enjoy the spoils — profits on land, business deals and speculative construction and import and export contracts enabling them to buy cars and mansions and live in luxury.

Garande, the “born free” street vendor, said he will go to the main stadium on Independence day Sunday not to listen to Mugabe’s speech but to watch military displays and a soccer match without having to pay admission.

He said he’s resigned to more of Mugabe.

Long life runs in Mugabe’s family; his mother died in her late 90s. He also employs a Malaysian physician known as a specialist in “longevity and regenerative medicine”.

“Nothing is going to change for a long time,” said Garande. – Sapa-AP