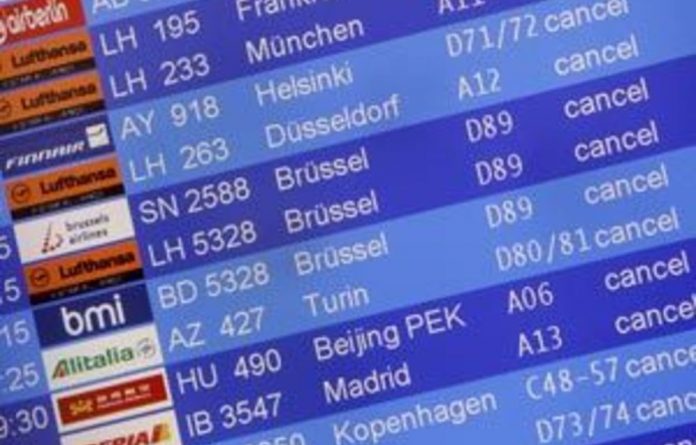 Thousands of travellers are expected to spend a fifth day stranded at South Africa’s airports as the chaos wrought by a volcanic eruption in Iceland continues.

On Sunday, Airports Company South Africa (Acsa) confirmed that dozens of flights to and from Europe had been cancelled.

“It is very difficult to know if airlines scheduled to fly will indeed be able to do so during this period of uncertainty,” Acsa said in a statement.

Thousands of passengers have been stranded in Johannesburg, one of Africa’s main transport hubs, as dozens of flights have been cancelled while the volcanic cloud lingers over European airspace.

British Airways, Air France, South African Airways (SAA), Virgin Atlantic, KLM and Lufthansa are among the companies that have cancelled flights to destinations across northern and central Europe.

The airports company said it was encouraging passengers to contact their airlines rather than go to the airport. Few passengers were present in Johannesburg’s international departures terminal this weekend.

SAA, which cancelled six flights to Europe on Sunday and warned further cancellations were possible, said it is paying for one night’s hotel stay for passengers stranded in transit.

“We are trying as much as possible to assist, but we are limited also in terms of how much we can assist,” said SAA spokesperson Fani Zulu.

“We are responding to an act of nature, it’s not a development as a result of a fault of our own.” — AFP