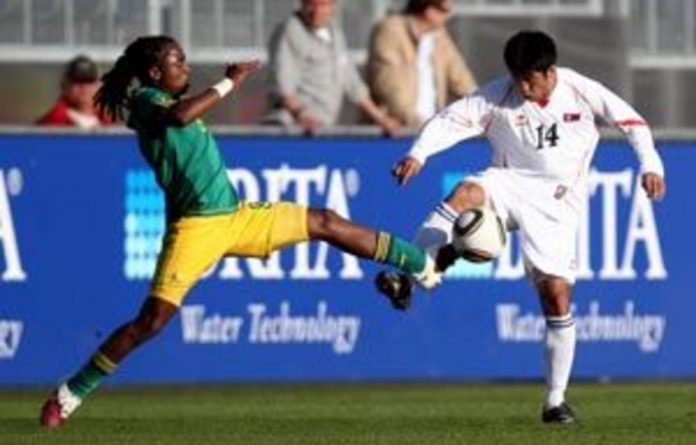 Bafana Bafana and fellow qualifiers North Korea played to a goalless draw on Thursday in a hastily arranged warm-up match as part of their preparations for the Soccer World Cup.

North Korea flew from their Spanish base for the game in Frankfurt — between the lowest ranked of the 32 qualifiers for the first World Cup to be hosted by an African country.

The outcome was no surprise as South Africa, who lacked unavailable Europe-based stars such as Steven Pienaar and captain Aaron Mokoena of Portsmouth, have consistently struggled to score.

Bafana managed just one goal in a home draw with minnows Namibia last month and it took a sizzling Siphiwe Tshabalala drive to force a similar result away to Paraguay three weeks ago.

South Africa created most of the first half chances in perfect spring conditions before a crowd of just 600 with strikers Surprise Moriri and Katlego Mphela troubling goalkeeper Ri Myung Guk.

Midfielder Ji Yun Nam had the best chance to end the goal drought after half-time with a long range effort that flew into the side netting with goalkeeper Itumeleng Khune beaten.

The World Cup hosts introduced 32-year-old Siyabonga Nomvete on the hour mark for his first national team appearance since 2007, but the Johannesburg-based striker failed to break the deadlock.

“This was a good test as it is crucial that my players face teams who have qualified for the World Cup. We need games like this to develop our rhythm,” stressed coach Carlos Alberto Parreira.

“It was our first international since the end of March and North Korea were difficult opponents who played very defensively. We created some chances but did not take them.”

South Africa will face Asian opposition again next Wednesday when they meet China at the home of Offenbach Kickers in their final international before returning home from a three-week training camp.

Bafana Bafana are likely to complete their build-up with fixtures against Colombia on May 27 and Denmark on June 5 at Soccer City, a 90 000-seat stadium on the outskirts of Soweto that stages the World Cup opener and final.

Parreira has been angry with the quality and quantity of opposition and personally intervened to try and woo two-time world champions Argentina to Johannesburg late next month.

But the 67-year-old mastermind behind the 1994 Brazil World Cup-winning team had to concede defeat as he did with countries like Brazil and England, who had finalised their pre-tournament schedules long before South Africa acted.

Parreira wants to avoid becoming the first coach of a World Cup host nation not to reach the second round since the tournament was first staged 80 years ago.

South Africa are the bookmakers’ outsiders behind Group A favourites France, and Mexico and Uruguay, but home advantage and passionate backing from fans blowing vuvuzelas could trigger upsets.

North Korea, given no chance against five-time champions Brazil, Portugal and Ivory Coast in Group G, sprung one of the greatest shocks in World Cup history when they defeated Italy in England 44 years ago.

They launched their preparations last year in France with a draw against Congo and have also played Zambia, Mali, Qatar, Iran, Venezuela and Mexico with Paraguay and Greece lined up for friendlies next month. — Sapa-AFP

South Africa is disproportionately targeted by cybercriminals. Digital attacks call for digital solutions and technology is a the prime weapon in this fight
Read more
Sport