From a flood to a trickle 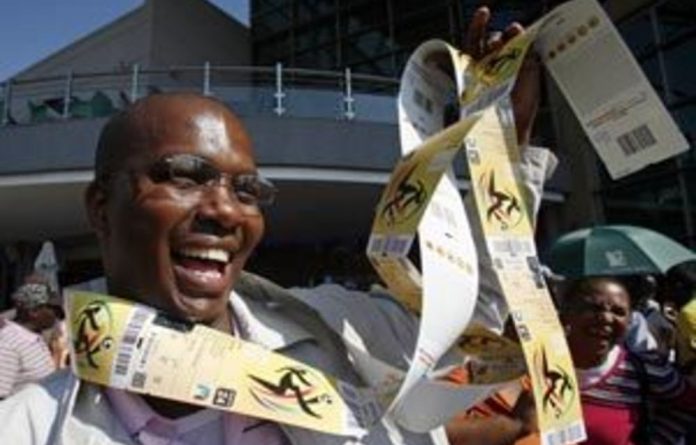 Authorised Fifa operator Match Hospitality AG is struggling to sell its allocation of 380 000 tickets for luxury hospitality suites and seats during the World Cup. It is now estimated that as few as 2 000 of these high-end tickets have been bought by foreign visitors.

Lethargic sales and a perception among international tour operators that they are being forced to buy overpriced tickets from another Match company — Match Services AG, which is responsible for selling tickets within Fifa’s tour operators programme — have contributed to constantly declining projections of the number of foreign visitors expected to attend the tournament.

And the consensus among international tour operators canvassed by the Mail & Guardian was that neither crime nor media fear-mongering about the possible outbreak of a race war in the country had affected sales. Instead, Match Services’ ineptitude and high prices were cited as reasons retarding sales. One tour operator told the M&G that it had had to pay a $30 000 (R224 000) licensing fee to Match as well as a 20% surcharge, plus 10% on each ticket it bought for resale.

Low sales last month led to Match Services returning 450 000 of the 1,8-million bed nights it had initially booked from hotels and bed and breakfasts. This was after the company returned 45 000 airline seats it had booked through SAA.

Match’s accommodation returns have led to a last-minute scramble around the country to fill empty beds.

A phone-around to several popular hotels in Durban, Cape Town and Johannesburg revealed some with vacancy rates as high as 50% following Match’s return of bed nights.

A reservations clerk at the 120-room Grand West City Lodge in Cape Town said: “Match returned more than 50% of the rooms it had booked with us. It is filling up slowly but surely, but we have been hit — 30% of our rooms are still available.”

Several hotels confirmed that Match does not allow hotels to lower prices on returned beds: “They dictate to us the price to ensure that we are at the same [pricing] level [as the other hotels where they have sold bed nights],” said a receptionist at Southern Sun Hotel at the Victoria and Alfred Waterfront.

There are growing perceptions in the trade that Match, which has links to Fifa president Sepp Blatter through his nephew Philippe, is a financial autocracy allowed to hog tickets at its discretion … and shift them into the public domain when it is convinced that no profit can be made.

Speaking to the M&G, Gillian Saunders, principal at Grant Thornton, estimates that as few as 2 000 foreign visitors to the country will actually watch matches from the opulent confines of the VIP boxes.

The luxury suite and seat packages available through Match Hospitality include hospitality suites (ranging from $1 500 for a first-round match to $5 500 for a semifinal), where the rich are waited on by hostesses and served free food and drinks throughout the match.

There are also business seats (ranging from $950 for a first-round match to $4 000 for a semifinal), where executives will have to do without the nubile servers, and feeding and drinking happens off-site in a marquee near the stadium.

Saunders said that many of these hospitality tickets were now being made available “at a reduced rate to the general public in this final ticket phase”.

She added that these would not be sold to the public as luxury box seats, but that would probably see Fifa reclassifying seat categories and downgrade business seats to the upper end of the market available to ordinary punters.

Concerns have long circulated in football and tourism circles about the inability of Match Hospitality to move expensive tickets in an economic climate that has seen corporates cutting back on their entertainment budgets.

Both Fifa and Match Hospitality have consistently refused to divulge the number of hospitality tickets sold, and did so again this week.

Said Match Hospitality spokesperson Peter Csanadi: “We don’t want to release any figures because these numbers are changing [as tickets get sold] and we would prefer not to have different numbers floating around in the media, causing confusion.”

Csanadi also declined to comment on Fifa general secretary Jérôme Valcke’s admission in February that fewer than half of the hospitality tickets had been sold.

Valcke also said that sponsors like Sony and Coca-Cola — who have the opportunity to entertain their guests with their own catering and hospitality arrangements — had returned a “significant amount” of their initial allocation of 550 106 tickets.

Grant Thornton estimates that 1,4-million match tickets — almost twice the initial allocation — have already been purchased through public channels and expects this number to increase to as much as 2,2-million. Good news for ordinary football fans; bad news for those service providers who put their faith and profit prospects in Fifa’s hands.

Match Services AG, Match Hospitality AG and their wholly owned South African subsidiaries — which appear to have control over large chunks of tickets for the World Cup — are linked to Fifa president Sepp Blatter through his nephew, Philippe Blatter.

In 2007 Match Hospitality AG was awarded the hospitality rights for both the 2010 and 2014 World Cups. One of its shareholders is Infront Sports & Media AG, the president and chief executive of which is Philippe Blatter.

Blatter, according to British media reports, is a longtime business associate of the Byrom brothers, Jaime and Enrique, whose Byrom Holdings plc is also responsible for ticketing matters related to the World Cup through another subsidiary, Match Services AG.

Infront is responsible for marketing Asian media rights (including television, radio and internet broadcasts) for the two World Cups. It shares the rights with Dentsu, a Japanese firm that also has shares in Match Hospitality AG.

According to the New York Times, an Infront subsidiary, Host Broadcast Services, also won a contract to manage television and radio signals for broadcasters during the 2010 World Cup.