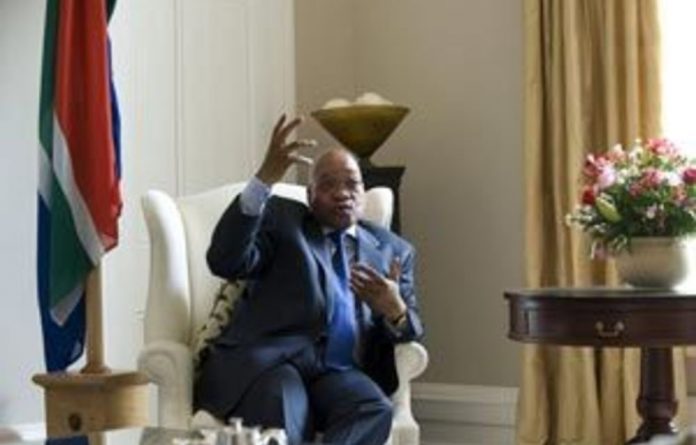 President Jacob Zuma revealed his HIV status on Sunday as he launched a scaled-up counselling and testing campaign aimed at stemming the spread of the pandemic.

“After careful consideration, I have decided to share my test results with South Africans,” said Zuma, who said he had tested negative recently.

“The purpose is to promote openness and to eradicate the silence and stigma that accompanies this pandemic,” he said.

Zuma, who told a court in 2006 when charged with raping a HIV-positive woman that he had showered rather than worn a condom to ward off the risk of HIV, revealed he had been taking regular HIV tests.

“My April results, like the three previous ones, registered a negative outcome for the HI virus,” the 68-year-old Zuma told thousands of people who attended the event at Natalspruit hospital, formerly Katlehong hospital, east of Johannesburg.

However, Zuma said that by disclosing his status his aim was not to put pressure on any citizen to do the same.

“Anyone’s HIV status is private and confidential. Disclosure is an individual decision. We must respect the decisions of those who choose to keep their status confidential, whether positive or negative,” Zuma said.

The campaign, which hopes to test 15-million people by the end of June 2011, is aimed at providing anti-Aids drugs to 80% of South Africans in need of treatment. The United Nations estimates 5,7-million people in South Africa, out of a population of 48-million, are HIV-positive.

‘Appeal to retired health workers’
Zuma said the health department’s 4 300 clinics and hospitals were ready to provide HIV counselling and testing services to all.

And he said the country would need to tap retired health workers to staff the campaign.

“Due to the size of the testing and counselling programme, and the labour force needed to make this a reality, we have appealed to retired nurses, doctors, pharmacists, social workers and other cadres of health workers to join the campaign,” he said.

The campaign’s prevention drive includes the government increasing the provision of male condoms from 450-million per year currently, to more than 1,5-billion condoms.

“We are also revitalising our male sexual reproductive health by increasing the provision of medical male circumcision services,” added Zuma.

The president said one of his government’s main challenges was in changing attitudes and lifting the stigma attached to the disease.

“We have to work harder, together, to fight the perceptions and the stigma.

“We have to make all South Africans understand that people living with HIV have not committed any crime, and that they have rights like any other citizen.

“We have to expand the knowledge and understanding of the epidemic to protect affected individuals and families,” he said.

A break from previous policies
Zuma first announced a break with the ultra-conservative Aids policies of the previous government of Thabo Mbeki on World Aids Day, December 1, last year. He said then that all babies with HIV would receive treatment at public facilities from April while women would receive care earlier in their pregnancies in a bid to prevent transmission to newborns.

Sunday’s speech not only broke a taboo by referring publicly to his own HIV status, but cemented his break with Mbeki’s policies and his administration’s years of failure to roll out life-saving drugs. Mbeki’s government even questioned the link between HIV and Aids and promoted garlic and beetroot as alternatives to medication.

Zuma’s personal life has come in for criticism, but his Aids policies have been largely welcomed across South Africa.

The president, who has three wives, came under pressure earlier this year when it emerged he had fathered a child out of wedlock with opposition parties accusing him of undermining efforts to fight HIV and Aids. — AFP