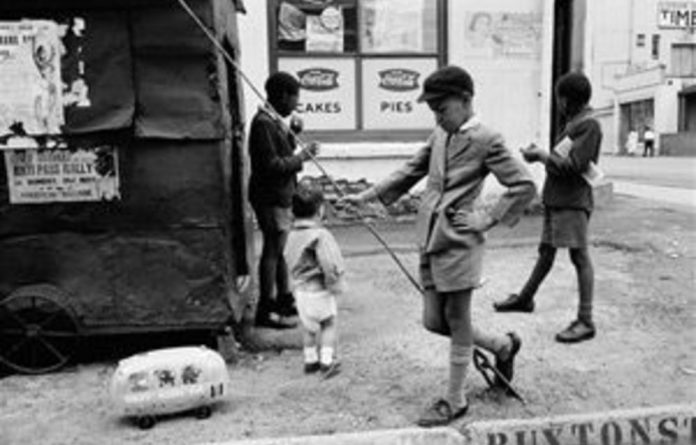 The 150 photographs in a new show at the Jewish Museum chronicling blacks and whites in South Africa during and after the apartheid era are not the images you expect to see.

No angry marches. No tear gas. No violence. No long lines of people patiently waiting to vote in 1994’s first democratic elections. No Nelson Mandela.

Photographer David Goldblatt, whose Jewish grandparents settled in South Africa in the 1890s after fleeing religious persecution in Eastern Europe, focuses on the subtler, daily effects of the corrosive system of racial segregation that was ushered in by the National Party in 1948 and remained in place until 1990.

Insanity of apartheid
Absent overt conflict, some of the black-and-white photographs require labels or the audio guide to be completely understood. Some seem strangely empty of people. But the overall effect of the show is powerful and disturbing, communicating with singular clarity the insanity of apartheid.

One particularly affecting image, from 1962, shows a white farmer with the daughter of a black servant standing close to him as though she were his own child. Goldblatt recalls that when he was photographing the man and his wife, the little girl just walked into the room and stood there, quietly sucking her thumb. The couple didn’t say a word.

Some of his images of Afrikaners have the hardscrabble look of Walker Evans’ photographs of white tenant farmers in the American South. But there’s an ominous edge, as seen in a 1964 photo of three members of a military unit of the ruling National Party on horseback.

Goldblatt, who grew up in the gold mining town Randfontein and whose father sold men’s clothing, says he wanted to explore the complicity of white South Africans — even well-meaning liberals such as himself — in apartheid.

Victims of anti-Semitism
One interesting facet of the exhibition, particularly relevant for the Jewish Museum, is the role of South Africa’s Jews in this era. Jews, who made up just 4,4% of the white minority after World War II, were privileged because of their skin colour but were also victims of anti-Semitism.

Although Jews became disproportionately involved in the anti-apartheid movement, Goldblatt doesn’t let his own community off the hook, whether it’s the Jewish shopkeepers who paid a fee to the mining companies to have a concession near the workers’
barracks or the mighty Harry Oppenheimer, who made a fortune in South Africa’s gold and diamond mines.

In 1966, Goldblatt took an amazing portrait of Oppenheimer, who was born into a Jewish family but converted to Christianity, sitting in an armchair and looking somewhat meek and anxious.

Goldblatt says Oppenheimer’s public relations team didn’t like the photo because he wasn’t portrayed as a captain of industry.

The exhibition opens on May 2 and runs until September 19, when it will travel to South Africa. – Sapa-AP