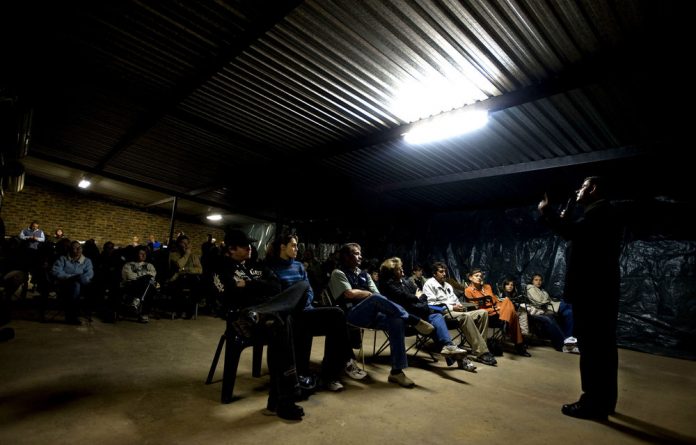 Right-wing white fears that South Africa is on the brink of a meltdown that will include wholesale white genocide have pushed “thousands” into stockpiling food and preparing safe houses as refugee camps for women and children.

The Suidlanders, a whites-only group that circulated emails three years ago saying Nelson Mandela was about to die, claim they are not mobilising for war but only reacting to threats to white safety since the murder of Eugene Terre’Blanche.

The group’s leader, Gustav Muller, told the Mail & Guardian the group acted within the law at all times and reports that it was stockpiling weapons were “absolute nonsense”.

But the Suidlanders are hoarding blankets and food and preparing “safe farms” outside every South African city and town in expectation of a “white genocide”, he said.

The Suidlanders are a non-profit registered section 21 company that has existed for eight years, Muller said. Its work is funded by donations from concerned South Africans and includes Muller’s “information sessions” for scared whites, whose attendance has grown enormously since Terre’Blanche’s murder a month ago.

At the time two Suidlanders posted a video on YouTube calling for calm and citing a well-known Afrikaner prophet to the effect that another leader had to die before “action” would begin.

“In the last few years things have been starting to change in this country,” Muller told the M&G. “People have begun to use hate speech and ANC Youth League leader Julius Malema talked about Luthuli House being home to a revolutionary party.

“On the front pages of newspapers you read that South Africa is heading for chaos and that it is on the edge of a meltdown. We can’t just sit back and wait for disaster.

“We are preparing for a refugee situation — and that’s it. We are planning safe places for the women and children. We are not saying we will make war. That is what Malema is saying. He has other plans, not us. We are reacting, not mobilising.”

The group is guided in all its decisions by its Christian beliefs, he said. “As we know, when farm invasions happened in Zimbabwe, they were not peaceful, so we have to be prepared,” he said.

“We tell people not to take up arms; we are just reacting to the situation out there. I look on us as a refugee movement. We have to prepare safe farms and get involved,” he said. “More than 600 000 to 800 000 people are connected to our group and people are now joining us in droves.”

Weapons used to protect the safe farms would have to be legally registered, said Muller.

When the order is overturned …
When the racial apocalypse arrives, make a beeline for the Heilbron Spar, Oranjeville, Gouritzriviermond, the Springs bridge over the N17, Kuruman’s Moffat Mission or the Ellisras Excel garage.

That’s the advice on the Suidlanders’ website for panic-stricken whites. A Suidlander official will then direct you to a safe farm — safe but not particularly hygienic, as you will have to dig your own toilet.

Once you’re in the sticks, there will be no rushing back to Heilbron Spar for groceries. So the Suidlanders suggest you stockpile canned goods for the big day. They also provide a guide to how to make your own powdered eggs and biltong.

The Suidlanders suggest salt could be used as a post-Götterdämmerung means of exchange and spices could be used as medicine. There is a list of useful veld plants to be added to your diet or used as cures.

They recommend that you keep in readiness a sound tent, ground sheet, stretcher and potjie.

But the Suidlanders are technologically ahead of the Voortrekkers — their website recommends that you “geocoach” yourself with a GPS to find your way to safety.

As anarchy has not yet descended on South Africa, people keen on a practice run must fork out a R50 fee.

The final tip — don’t leave onttrekking until the last minute. Unless you want to be caught in the traffic with all the other doubting Thomases.

The web begins to unravel
The arrest a month ago of two right-wingers in Worcester, Western Cape, on suspicion that they were planning to sabotage the World Cup brought the Suidlanders into public focus. At least one of the arrests has been linked to alleged countrywide raids on the Suidlanders.

Nine days after Harding’s arrest, 62-year-old former commando Frederick Rabie was arrested at his home for possession of arms and ammunition.

The Hawks are investigating both cases, but have not confirmed links between the two and any right-wing organisations.

The Hawks are also investigating a case in neighbouring Ceres, where members of the extremist Jessurun-broederskap (fraternity), with alleged links to the Suidlanders, were arrested in December last year.

Three men, a minor and a woman were arrested on the farm Grootdam, where a meeting with the Suidlanders was supposed to have taken place. A small arsenal of semi-automatic weapons, some of which were also linked to the defence force, was also discovered on the farm.

Several right-wing sources have voiced fears that the Suidlanders might be a National Intelligence Agency project to net “right-wing crazies” who might have sinister motives.

Suidlanders leader Gustav Muller denies this, saying the rumours had started because of his past career in intelligence.

“We also have no connection to the two guys arrested with caches of arms in Worcester. They have not been to any of our meetings,” he said.