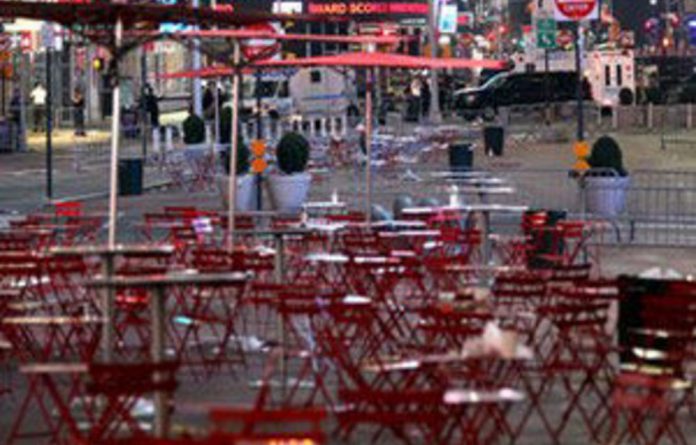 An apparent failed car bomb in a vehicle that was smoking and emitted a small “flash” caused police to evacuate New York’s Times Square as bomb specialists worked to dismantle the device on Saturday night, Broadway’s busiest night.

“This appears to be a car bomb that the bomb squad is in the process of dismantling,” New York Police Department spokesperson Paul Browne said. “We do not know the motive.”

Browne said an NYPD mounted policeman spotted a box smoking in the back of the Nissan Pathfinder sport utility vehicle and that the popular tourist destination in the heart of Manhattan’s Midtown was evacuated shortly after that.

A police source who asked not to be named said the device was a car bomb and it included three tanks of propane and two canisters of petrol. He said police had not fully cleared the Pathfinder.

He would not say whether the incident was being treated as an act of terrorism.

New York authorities have remained on high alert for another attack since the September 11 2001 attacks in which hijacked airliners toppled the World Trade Centre’s twin towers.

Last year police said they thwarted a plot to bomb the New York subway system and arrested a number of suspects in a case that has led to some guilty pleas.

A New York Fire Department officer told Reuters the vehicle was found to contain explosives, gasoline, propane and burned wires and was being treated as a “failed device”.

The officer, who did not give his name because he was not authorised to speak to the media, said a man was seen fleeing the car and that police had protectively evacuated several blocks in case there were other devices.

In Washington, FBI spokesperson Richard Kolko said the Joint Terrorism Task Force has responded to the incident along with the NYPD.

A US official, who asked not to be identified by name, said the US Department of Homeland Security was aware of the situation and was monitoring developments, but declined to comment further. The official said the New York Police Department was in charge of the investigation.

Times Square was eerily empty for several blocks on Saturday night, the busiest night of the week on the Great White Way as tourists and theater-goers watched from behind barricades as anti-terrorism units swarmed the scene.

‘Memories of 9/11’
Don Slovin, watching the police through the window of a souvenir shop a block from the SUV, said, “Of course it conjures up memories of 9/11.”

The SUV was parked very close to a production of the show The Lion King on 45th Street. Women in evening gowns were among the crowd on one of the warmest nights of the year and the busiest night of the week for Broadway theatres in the area.

Vehicle and pedestrian traffic was very heavy on streets outside the evacuation zone, including Sixth and Eighth Avenues. All intersections in the area were blocked by police and fire department vehicles, lights flashing.

Another New York City firefighter who said he arrived early on the scene described the vehicle as a dark-coloured SUV, and said it was parked at the corner of 45th Street and Seventh Avenue. He confirmed the vehicle was smoking and also said he saw “a flash” from the back of the SUV. The firefighter said a “mini-explosion” occurred around 6.30pm.

“The SUV was smoking. There was a flash and we put two and two together” and an evacuation was ordered, he said.

The bomb squad remained at the scene as of midnight.

Reuters reporters on the scene said they heard an explosion from the area of the SUV about 9.15pm. An NYPD community affairs officer said that and another small explosion heard by bystanders were the sound of water cannons aimed at the vehicle in an attempt to break through the glass.

The square itself was mostly evacuated by 8pm, according to Reuters reporters on the scene. Police had evacuated an area stretching from about 42nd Street up to 47th Street and including Seventh Avenue and Broadway.

A Reuters reporter on the scene said police began to broaden the area evacuated at about 9.30pm, with crowds on 45th Street being pushed back from Times Square to Eighth Avenue to the west and Sixth Avenue to the east.

Tourists in the area expressed annoyance and amusement. Nam Vu (24) said he had arrived by bus in New York at 8am from Canada and was prevented from meeting a friend at the Marriott Marquis on Times Square.

“I feel like I’m on a TV show,” he said. “Where is Denzel Washington?” – Reuters