Greeks to ramp up protests, euro hit by contagion fear 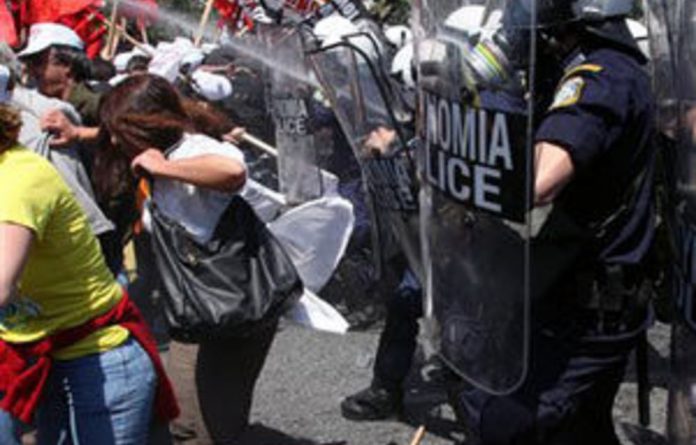 Greece is likely to grind to a halt on Wednesday as protests intensify against draconian measures to secure financial aid, sending global stocks and the euro tumbling and stoking anxiety about an EU debt contagion.

“Who’s next” was the question weighing on markets unconvinced that a record €110-billion ($142,8-billion) EU/IMF bailout for Greece would stop its economic woes spreading to other vulnerable eurozone countries, such as Spain and Portugal.

“There is always a risk of contagion,” the head of the International Monetary Fund, Dominique Strauss-Kahn, was quoted as saying.

“Portugal has been mentioned, but it is already taking measures and the other countries are in a much more solid situation. We have to succeed in avoiding contagion … but we should remain vigilant,” he told French newspaper, Le Parisien.

“There is no real risk for France, Germany or the other big European countries,” he said.

Finnish Finance Minister Jyrki Katainen went further, telling a local broadcaster: “Our economies are so linked that a risk that problems spread from a country to another is very high.”

The euro fell to a one-year low of $1,2936 on Wednesday and Asian stocks fell following a steep slide in US shares overnight. Spanish shares fell 4,6%, leading a sell-off in Europe.

The risk premium on Greek, Portuguese and Spanish bonds also soared amid the jitters, which included speculation of a possible restructuring of Greek debt.

“This is because the market is still pricing in some more sovereign crisis problems out of Europe, and for the short term it can continue for some more time.”

Spain’s prime minister, José Luis Rodríguez Zapatero, was forced to dismiss a market rumour his country would soon ask for €280-billion in aid, and his deputy said the government was confident it could bring down the deficit by 2013.

Markets fear a debt crisis in Spain because the economy generates close to 12% of the eurozone’s output, almost five times more than that of Greece.

Spain, the eurozone’s fourth-largest economy, has promised €50-billion of budget cuts to shrink its fiscal deficit to 3% of GDP from 11,2% last year, through a hike in value added tax and a freeze on civil servant wages.

Labour reform is also a key concern in the country, which currently has the highest unemployment level in the euro zone at about 20% and whose economy is still mired in recession, unlike most others in Europe.

‘No faith’
About 4 000 people rallied in Athens on Tuesday, and even bigger crowds are expected on Wednesday when private-sector workers join the public sector’s 48-hour strike for a day.

All flights will be grounded and the country could be paralysed in the third joint public-private sector walkout since the start of the year and the first since the government announced the austerity measures.

The level of participation is watched closely as a test of the strength of opposition to the measures, as investors are worried social unrest could jeopardise the government efforts to reform a country where protests have turned violent in the past.

The demonstrations have so far been limited to tens of thousands but anger is mounting, with opinion polls showing ordinary Greeks believe they are paying the price of the crisis while tax evasion and corruption go unpunished.

Hospitals will work on skeleton staff, public transport will come to a halt for most of the day, and some shops will be shut as private workers join the public-sector strike.

“There is no faith in what the EU and the IMF have proposed for Greece,” said Dean Popplewell, chief currency strategist at OANDA, a foreign exchange brokerage in Toronto.

“Capital markets are betting on a Greek default, as Greece’s own populace is not going to accept the terms of this rescue.”

On Tuesday, police fired teargas at a small group that pelted them with rocks and bottles outside Parliament.

Workers, students and pensioners will march to Parliament again on Wednesday to protest €30-billion ($39,96-billion) in tax hikes and spending cuts Greece pledged last weekend in return for the financial aid.

European policymakers have tried to soothe market nerves but news on Tuesday that Greece has appointed debt restructuring specialists Lazard fuelled speculation that some form of orderly rescheduling or payment moratorium may be likely, despite official denials.

“Any form of debt restructuring is out of the question,” Finance Minister George Papaconstantinou told Reuters.

But worries that the aid package may be insufficient to meet Greece’s borrowing needs contributed to market concerns.

Economists at several European financial firms calculated those needs to the end of 2012 at 120 billion euros, based on latest IMF and Greek government figures. Germany’s Bild daily cited a government estimate of €150-billion given to the parliamentary finance committee. – Reuters