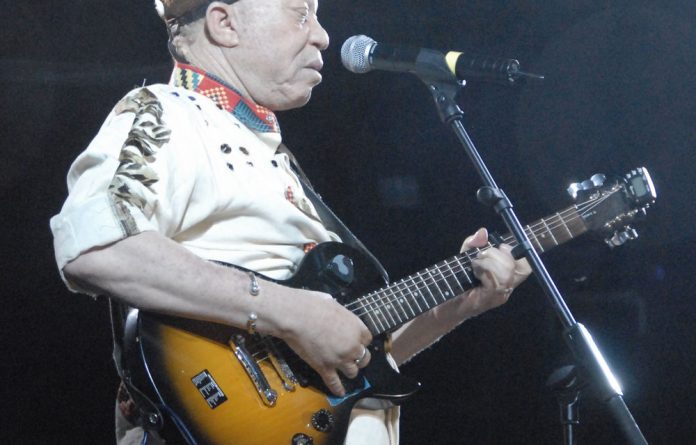 Salif Keita is well established in Harare and his brilliance was evident in the city on Sunday night. The concert, the finale of the Harare International Festival of Arts, was sold out — a 4 000-strong crowd turned out to hear the “golden voice of Africa”. Roads to the venue were a nightmare and hundreds of people milled around outside hoping to get last-minute tickets. Inside Keita was welcomed with a resounding standing ovation.

The Mansa (“king of kings”) of Mali is an enigma. A royal descendant of the founder of the Malian empire, Sundiata Keita, Keita won the Best World Music award at this year’s Victoires de la Musique (the annual French awards ceremony that recognises the best singers of the year).

Despite his impressive résumé, Keita is a reserved man.

In the comfort of his hotel room on the 19th floor of the Crowne Plaza Monomotapa, he welcomes me warmly for our interview. He is dressed in a white suit, but beneath his jacket he wears a black T-shirt with a map of Africa on it.

He has a taste for jewellery. He wears a gold necklace, a silver ring on each hand and a silver earring in his left ear. As if reading my thoughts, he laughs and volunteers that he loves silver and gold.

He motions me to take a seat in the sunlit room.

You left Mali in the mid-1970s but you moved back in 2 000. Has your reintegration been successful?
I lived in Paris for 20 years and I brought back to my country a lot of experiences. These [experiences] I have used to grow as an artist as well as to provide lessons for today’s youth in Bamako, where I now live.

Three albums have been produced from Mali, Moffou in 2 000, M’Bemba in 2005 and La Différence last year, and a recording studio has been built in Bamako. All this work is a sign of the richness in music that exists within the Malian community.

In African culture people’s names are often drawn from their parents’ experiences and their expectations of them. For most, their African names have a meaning. What does Salif mean?
Yes, it’s true that African names always have a meaning. I believe it is so to give us something positive to look forward to even though there is often negativity around us. My name Salif in the Mande culture of Mali means glory and power.

The song La Différence, in the album of the same title released in 2009, tackles a topical issue, albinism. Can you explain its essence and how it relates to albinism in Mali, in particular, and in Africa in general?
The song La Différence celebrates differences in people. It is about the differences that I see in life. Whether we are tall, short, black, white and even albinos, there is always beauty in its own unique way.

Unfortunately, albinos in Africa have been ill-treated and it is not easy growing up as an albino in Mali or elsewhere in Africa. The things that happened in Tanzania, where albinos were killed for wealth, is discriminatory and laws must be put in place to punish such offenders. People in Africa must understand that albinism is not a choice, but that one is born with it.

As for me, it was not an easy path to become an albino musician, but music gave me the will to live and the power to progress as an artist. It liberated me from the ostracism of family and friends.

My foundation [The Salif Keita Global Foundation] is one such platform for albinos and, with the support of well-wishers, we advocate for the plight of albinos, who can suffer from skin cancer at an early age.

Ill-treatment of any sort is wrong and is inhumane.