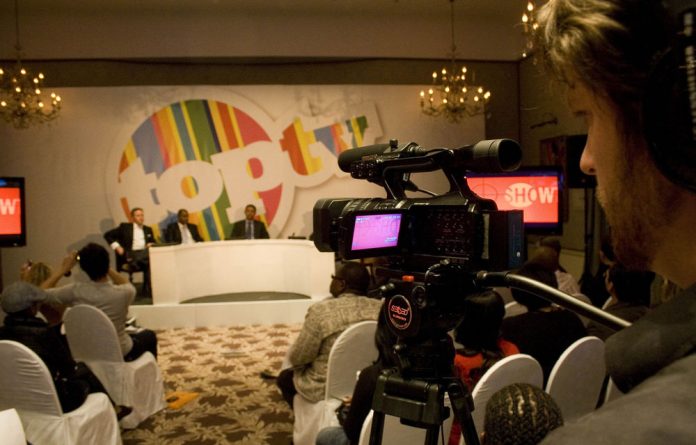 It seems MultiChoice is not the only broadcaster that is concerned about the arrival of new subscription broadcaster TopTV — the SABC is too.

TopTV’s chief marketing officer, Elouise Kelly, told the Mail & Guardian this week that the SABC had refused to flight TopTV advertisements on its television channels because it saw TopTV as competition.

But SABC spokesperson Kaizer Kganyago denied this. He said TopTV had not approached the SABC about flighting adverts on its TV channels, only on radio. But Kganyago said the SABC had also not advertised MultiChoice on its channels.

TopTV, which offers between 25 and 55 television channels for between R99 and R249 a month, launched last Saturday and sold all the 50000 decoder and satellite-dish packages it had put on to the market on the first day. TopTV spokesperson Melinda Connor said that the broadcaster’s call centre was taking 1 500 calls an hour.

MultiChoice’s response to TopTV’s entrance into the market was to launch a new DSTV-Lite bouquet — 25 channels for R99 a month — the day before TopTV hit the airwaves. DStv’s Compact bouquet offers 44 channels for R232 a month.

Connor said that, as a contact person for the new broadcaster, she was getting “quite a few” responses via email and the website from people who had cancelled their DStv subscriptions and were waiting to be installed with TopTV.

“Also there are some who are battling to afford the DStv subscriptions and are opting for TopTV,” said Connor.

Jackie Rakitla, MultiChoice’s head of corporate affairs, denied that the decision to launch DStv-Lite was meant to pre-empt TopTV’s launch — it was timed to coincide with the World Cup. “As you know, this is one of the biggest events in South Africa,” said Rakitla. “We would like to contribute to the experience by providing access to great sporting entertainment.” The World Cup will be screened on SABC.

Kelly said TopTV always knew there would be interest in the product but it didn’t expect that it would be so immediate.

“Pay TV is one of those purchasing decisions people mull over first, so our expectation was that there would be lots of questions first and then the purchase afterwards,” said Kelly.

TopTV chief executive Vino Govender said repeatedly in the build-up to the launch of the broadcaster that there were 5,5-million TV households in South Africa with limited channels and that was TopTV’s target market.

Subscribers also have access to the four current terrestrial free-to-air channels run by the SABC and e.tv.

Additional channel bouquets include a 14-channel children’s and music bouquet, an 11-channel family and knowledge bouquet and a seven-channel premium bouquet.

TopTV has secured programming and channels from household names such as Fox, Warner, Disney, CBS and Discovery.

Govender said TopTV was expecting to have 380000 subscribers by the 36th month of its operations, which would be TopTV’s break-even point.

Rakitla said that MultiChoice designed its bouquets to cater for the varied needs of a large range of customers.

“As stated before, MultiChoice welcomes competition as we believe it will give customers choice and stimulate interest in pay TV,” Rakitla said.