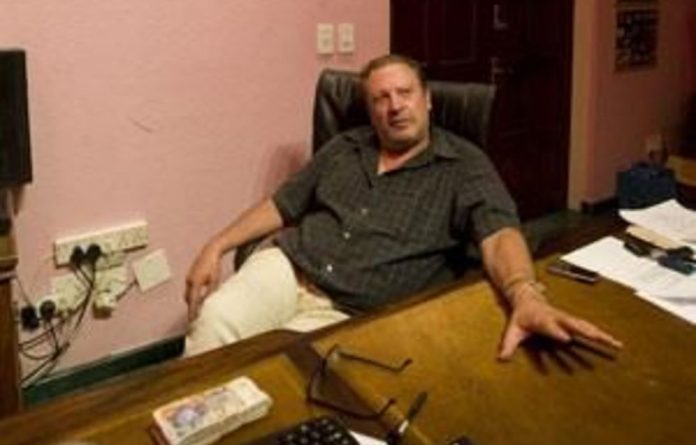 Lolly Jackson was smiling beside his uncovered grave at Germiston’s South Park Cemetery on Monday morning. His hair was gelled back, and he wore a rose on the lapel of his tuxedo. Then a sudden gust of wind, and the life-sized photograph of South Africa’s strip-club mogul was blown off its pedestal, leaving a trail of shattered glass.

“He came in with a bang and he left with a bang,” quipped Jackson’s brother, Costa.

It was a soap-opera moment.

Costa Jackson dropped a Teazers T-shirt into the grave. “Lolly, this is for you. We love you,” he said. “Lolly lived life to the fullest and he was happy. We all miss him.”

Jackson was shot dead at a friend’s house in Kempton Park last Monday. Police are still hunting for his alleged killer, George Smith, who is believed to have been hired by Jackson as a debt collector and extortion agent.

“I have known him for 35 years,” said close friend Vincent Marino, who is also Jackson’s biographer. “It feels like I have lost a brother more than I have lost a friend.”

As the mourners moved away, Jackson’s widow, Demi — in black pencil-skirt and gold-rimmed sunglasses — held back sobs as the red earth was shovelled on to her husband’s casket.

Cigarettes were lit, hugs were exchanged. There was a hum of muted conversation. “I’m going to buy an airline,” one man murmured to his friend. Not the kind of comment you would expect to hear at a funeral, but it wasn’t surprising to hear it at this one.

After the service, Teazers spokesperson, Sean Newman, appealed to the press for privacy: “We’ve just buried a father, a husband, a grandfather, and a boss. We all need time to mourn.”

He added that the family had “confidence in the police” and believed that Jackson’s murderer would be “brought to book”. Until then, he said, there would be no further comment.

A previous version of this article incorrectly stated that Newman’s statements were made by Jackson’s son.