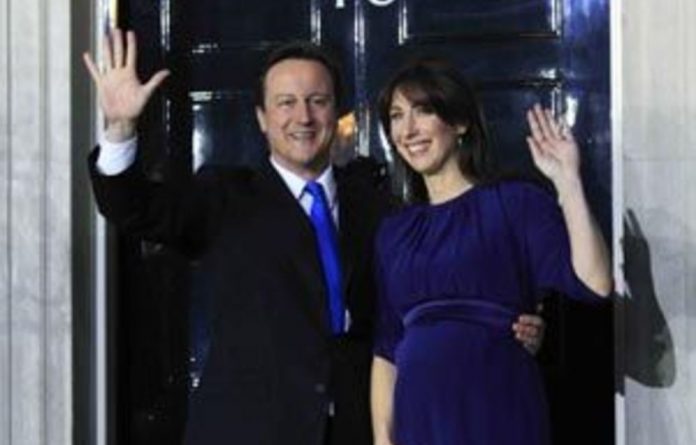 The agreement between the two parties, reached five days after an inconclusive election, ends 13 years of rule by the centre-left Labour Party under Tony Blair and his successor Gordon Brown.

The untested partnership will have to clean up public finances, with a record budget deficit running at more than 11% of national output.

Markets welcomed the agreement, hopeful that a government led by the centre-right Conservatives will take swift action to bring down spending.

“This is going to be hard and difficult work. A coalition will throw up all sorts of challenges. But I believe together we can provide that strong and stable government that our country needs,” Cameron said in his first speech as prime minister.

The Liberal Democrats were also celebrating after decades spent in the shadow of Labour and the Conservatives.

His party put its final seal of approval on the deal at a meeting that ended after midnight on Tuesday.

Cameron, a 43-year-old former public relations executive, took over as prime minister just hours earlier when Brown admitted defeat in his own efforts to broker a deal with the Liberal Democrats.

He is Britain’s youngest prime minister in almost 200 years.

The Liberal Democrats have more in common with Labour in policy terms, but talks to form what the media called a “coalition of losers” swiftly fell apart.

The Conservatives are the largest party in parliament after last week’s election but fell 20 seats short of an outright majority. Combined with the Liberal Democrats, they will have a majority of 76 seats.

Osborne to be finance chief
The prime minister’s office announced late on Tuesday there would be five Liberal Democrats in cabinet in total, including Clegg.

It did not name the other four ministers but there were reports Vince Cable, the highly regarded Liberal Democrat Treasury spokesperson, would be given a role overseeing banking and business.

A Conservative source said the two parties had agreed to significantly accelerate deficit reduction plans. The focus would be more on cutting public spending than on raising taxes.

Another Conservative source said George Osborne, a close friend and ally of Cameron, would become the new Chancellor of the Exchequer (finance minister).

Some in the finance industry have expressed doubts about Osborne because he is untested and takes over an economy emerging from the worst recession since World War Two.

William Hague, a former Conservative leader and one of the main negotiators with the Liberal Democrats, will be the foreign minister. — Reuters