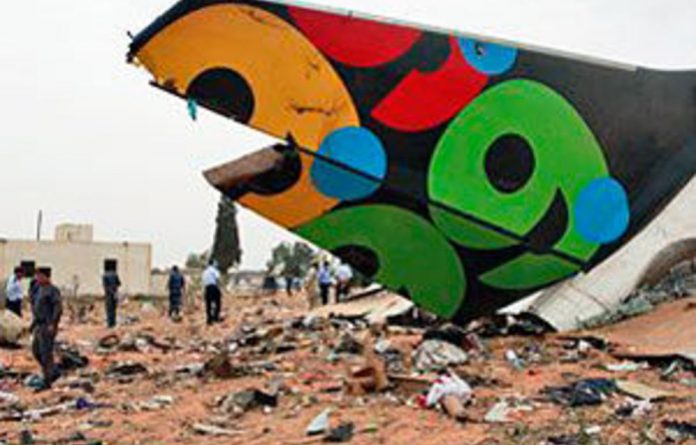 The Star reported on Thursday that while there had been no official release of the passenger list following the crash of a Libyan plane in Tripoli on Wednesday, it had established the identities of nine South Africans on the plane. It listed them as: Norbert Taferner and his wife, Paula; Cathrine Tillet; Frans Dreyer; Anton Mathee; Bridgid Bree O’Mara; Robert Edward Weber; Nigel Peters; and Hans Wolfaardt.

One hundred and three people were killed in the crash.

According to the newspaper, there were unconfirmed reports that two more South Africans died in the crash.

DA leader Helen Zille expressed her condolences to the Dreyer family as well as the families and friends of the victims of the air disaster.

“We are deeply saddened by the news that DA MP Anchen Dreyer’s brother, Frans, lost his life in the crash”, she said in a statement.

“He leaves behind his wife, Estelle, and two daughters, Lisa and Marié”.

“Our thoughts are with Anchen and the Dreyer family at this difficult time. We pray they will find the strength to bear this loss”

Libyan Transport Minister Mohammed Ali Zidan said the dead included nationals of nine countries but that a full 61 came from The Netherlands, which ordered flags on government buildings flown at half-mast as a mark of respect.

Zidan said the boy who survived was also Dutch.

About nine hours after the 6am crash, the child underwent surgery at a Tripoli hospital where medical staff said his condition was not life-threatening.

“The boy suffered broken legs and was injured in the head,” a hospital official told reporters after the child came out of the operating theatre.

Zidan said an inquiry was under way into what caused the Afriqiyah Airways Airbus A330 to break up massively as it was landing, but he ruled out terrorism.

He said that both black boxes had been recovered and that four investigators from Airbus and three from France were on their way to Tripoli to join the inquiry.