Dissident voices beyond the rainbow-nation euphoria 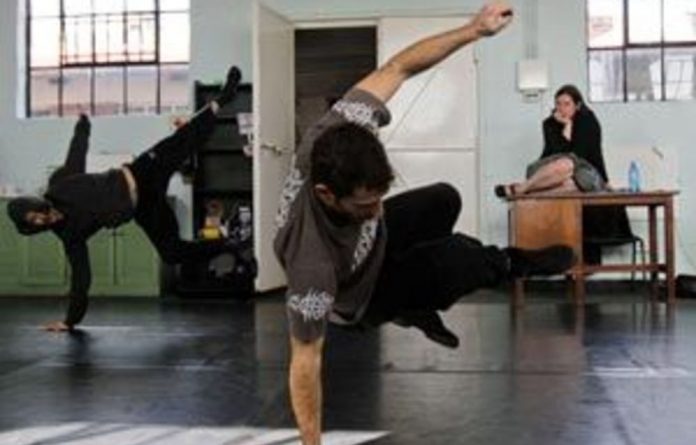 Argentinian choreographer Constanza Marcas returned to Johannesburg from her home base in Berlin last month to begin rehearsing a new work, The Offside Rules, an outspoken work about the country’s experience of the build-up to the World Cup.

Marcas arrived with three international dancers: Argentinian Tatiana Eva Saphir, Hansel Nezza from Spain and Elik Niv from Israel.
This is Marcas’s second visit to South Africa. She brought her work about youth and sexuality, Hell on Earth, to the Dance Umbrella last year. It was a multimedia project that shone a light on the issues and habits of European kids — games played out of boredom, immigrant identities and the edgy issue of girlhood sexuality were treated with stark realism.

The new work is set on Jo’burg’s city streets and is no less in your face. Photographer Nadine Hutton has provided a rapid-fire multimedia backdrop to the confession taking place centre stage.

Are you feeling it as you work your way though Johannesburg, with the show of flags?
Exactly. All these guys whose jobs now [involve] putting the South African flag on your car mirror — the possibility of selling flags in the street — it is a way of people surviving. But it’s also like they are really desperate. So anything related to the event makes for euphoria. In the moment there’s going to be more consumerism, but it’s going to fade.
In a country such as Germany you have this stability, and after the World Cup there maybe people learned to love Germany more openly, which they weren’t allowed to before. So then it had a good outcome. But for countries that have more problems in the background, this is a bit more of a question.
What is pretty obvious when you come from outside Johannesburg is that there is this segregation determined by space and transportation. It is still very strong and somehow this is the thing that keeps everybody in their neighbourhoods. It keeps everybody where they are supposed to be. And I find that this is what is schizophrenic and contradictory in daily life. It’s supposed to be “Africa unite”, but actually it isn’t really because it’s not something that you experience.

Did you think that you were going to do a piece about contradiction or did you think, in the first place, that you were going to do a celebration of togetherness, given that there’s this “rainbow nation” nickname?
When I came here with the piece Hell on Earth we had to find somebody local [to join the cast]. I had just landed and we were going to Soweto to see a show by a German director and we went there with the whole company.
When we arrived in Soweto, we did a tour around Kliptown and we talked with people. They showed us the Walter Sisulu remembrance monument and after that when we got on the bus the girl who was going to do the part joined us. She learned everything incredibly fast — I was so happy.
But later someone from the Goethe-Institut asked where is she going to sleep? And I was like, “I don’t know. She can go back home”, and someone said: “It is not so easy. She cannot just go back home.” And I realised that I was doing something that was not that simple. She was quite upset and then someone said: “Okay, her family has to know. If she sleeps with the kids maybe. But maybe the father doesn’t like it.”
All those things I really didn’t know. So maybe I made a social gaffe, or maybe it was a big organisational problem. I had no idea about these things. So I realised that there are limits to things. It was my first social contact. And then it was pretty obvious when the show was on that she needed a special taxi. Not everybody goes to Soweto at night and it was quite a logistical thing to have her in the show.
And then when children [from the township] came to see our show, the Goethe-Institut had to organise special buses for them. So you realise that segregation is really a big issue here. This segregation operates on a daily basis.

And that’s where you got your title of the new show from — the concept of what the rules of engagement and disengagement are?
It was something I thought about before I came here. When the title came up, for me it was a great play on words, what with the World Cup happening. Its a way of getting people to talk about themselves. It was so hard. People have very well-kept secrets here. When I did the audition, I asked everybody questions and it was really hard. People would be very short.
I was asking about the work and what they felt and nobody had a critical view. For me that was funny. I’m not from Fifa. I’m not here to make a show with big money about football. So they could really tell me what they thought the World Cup was going to be like. Some people said: “The rich are going to be rich and the poor are going to be poor.” They dared to say something, but in general they had caution.
Even today I was talking to one of the performers and I realised that people work in such tension in daily life here that if they open up they might just completely fall apart and crack. Johannesburg is the kind of city where you need strength to take the fucking minibus.

What is your hope for this run given that it’s not just a praise piece for the World Cup and that it has an interrogative edge to it?
My pieces ask questions. I just want people to reflect and to get impressions that stay with them somehow. Images that come back.

What if people complain that The Offside Rules is not in the spirit of the moment?
This happens. Because I make something about ambivalence, I get ambivalent reactions.

The Offside Rules runs at the Market Theatre until June 6

Buying art at the fair?