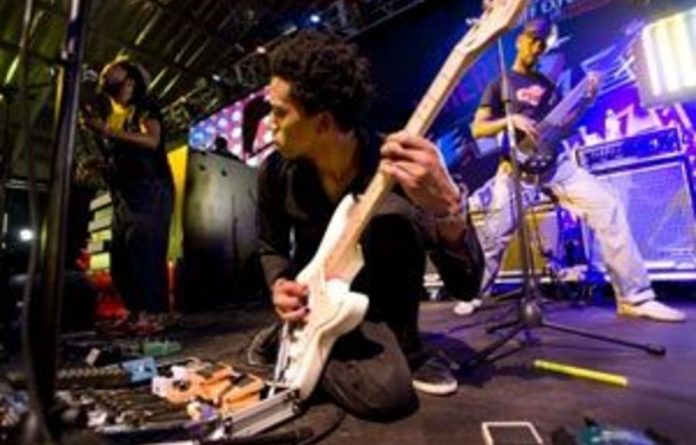 2010 is shaping up nicely for the BLK JKS. As the spotlight turns to South Africa, with less than a month to go before the World Cup lands on our shores, South Africa’s pre-eminent Afro-rockers are well positioned.

Even those who just don’t get their music have started to realise that the BLK JKS are an exciting, dynamic and sexy phenomenon.
The South African music industry, which had no idea what to make of them two years ago, has started to realise what these four young punks have achieved by not taking “no” for an answer.

Take a look at what has transpired since they dropped their debut album on the world in August last year.

After Robots (Just Music), which was critically lauded at home and abroad, has gone on to win them a South African Music Award (Sama) for the best alternative English album and a nomination for album of the year.

But the alternative English Sama was an odd decision, especially when you consider the band sing in at least four or five languages and English is by no means the dominant one. The award appears to push the BLK JKS further from the mainstream, rather than towards it, positioning them as a cultural oddity rather than the new dawn of an internationally acclaimed South African music scene.

But let’s not forget the BLK JKS didn’t get to where they are by the industry doing them favours — and little is going to change now.

The international acclaim they have received has had huge benefits for the band, as can be expected when people such as former Nirvana drummer Dave Grohl and Led Zeppelin bassist John Paul Jones are championing After Robots as their favourite album of 2009.

They are one of only three South African acts chosen to play at the Fifa Kick-Off Concert on June 10 — before the furore about the lack of South African artists resulted in some other late additions.

An American promoter is organising the show, so surely it was no coincidence that the three artists chosen — the BLK JKS, Vusi Mahlasela and the Parlotones — all have significant musical currency outside South Africa.

Then there was last weekend’s Smirnoff Experience, which saw the world’s number-one DJ, Tiesto, flown to Johannesburg to play a massive party at Rand Airport.

As part of the Smirnoff Experience Mash-Up, Tiesto remixed an as-yet-unreleased BLK JKS track, Dreaming, which he debuted on the night as the BLK JKS danced on stage around his decks.

It was an incredibly odd moment and the BLK JKS were feeling this on the night, especially after they had performed a spirited, aggressive set earlier in the night to an audience of preppy jock types who had come to blow their whistles, crack out their glow sticks and dance like it was the early 1990s.

When I chatted to guitarist Mpumi Mcata later in the evening at the bar, he said the gig had felt as though the band had gone three years back in time to when they were still playing to audiences with confused faces.

The majority-white audience did not quite get the BLK JKS and their chants for Tiesto half way through the set made it plainly obvious.

But the BLK JKS responded the only way they know how — delivering a blistering show that rattled the roof and had their few fans in the audience jumping around with glee.

As they brought the show to an end with a fiery rendition of uMzabalazo, a reworking of the old struggle song, Mcata leaned out into the audience and chastised the crowd, asking them to think hard about which country they are living in — a poignant moment that probably went over the heads of the masses of raver jocks who had assembled.

But what did you expect from an exclusive corporate party whose idea of a cool tag line emblazoned on the wall was “Where Afro meets preppy”.

Brands such as Smirnoff hardly have their finger on the pulse and the same can be said for Tiesto — in fact, all that was happening on the night was that the BLK JKS were being used to give both brands some much-needed street cred.

Which brings us up to date, almost. There is also that new EP to talk about, which has been titled Zol!

Zol for the ears and the soul
This new five-track EP sees the BLK JKS broadening their sound significantly, which will leave their fans guessing where they will be headed next.
The first single to be pulled from Zol! is the title track, which sees them embracing a much lighter pop sound than we have previously heard.

Zol! is a lilting Afro-pop song that is driven by a catchy dance beat.

The chorus of “zol after score” and the refrain of “I can roll and shoot at the same time” presents an interesting take on the soccer-themed anthem we are all too familiar with at the moment, but this one is clearly rooted in township music and culture, not a mega-bucks cash-in with a slight hint of an African feel — you know, something the Europeans can dance to and feel African.

Although Zol! may even get on to radio, the EP’s real strength comes from its first two tracks, the ones that seem to map out a new sound and future for the BLK JKS.

The first, IIEYS, is the stand-out track, a stunning reworking of It’s In Every Thing You’ll See from the band’s 2008 Mystery EP.

On Mystery the track was an exploratory, acoustic, ambient piece with hints of cosmic free-jazz, but on Zol! it is reimagined as a post-punk scorcher that is laced with juicy distortion and Radioheadesque melancholy.

Bogobe is the second revelation on Zol!, a haunting psychedelic piece that began life as an acoustic jam.
Featuring drummer Tshepang Ramoba on vocals, it is reminiscent of After Robots‘ closer, Tselane, which many fans welcomed as a delightful curveball from a band that has built its reputation on hard-edged psychedelic rock.

Together these two songs offer a glimpse of where the next BLK JKS record may head but, then again, this is the band that does what people least expect.

The EP is rounded off with the jazz-meets-prog rock of Paradise, a firmly entrenched track from the band’s live set, finally laid down to tape and what is billed as a demo of the band’s infamous encore, uMzabalazo.

For international fans this will be the first release of this epic BLK JKS calling card and South African fans who have the band’s
first independent EP, BLK JKS, will have a different recorded version of the song.

Although this new version is no slouch, the previous version strikes me as a more robust and sinister recording.

Zol! may be a stop-gap measure between the band’s debut and their eagerly awaited sophomore release, but it is an inventive collection of material that shows that the BLK JKS are only getting started on their sonic journey.

Those who wanted to paint them into a corner as “just that African prog band” will have to think again.