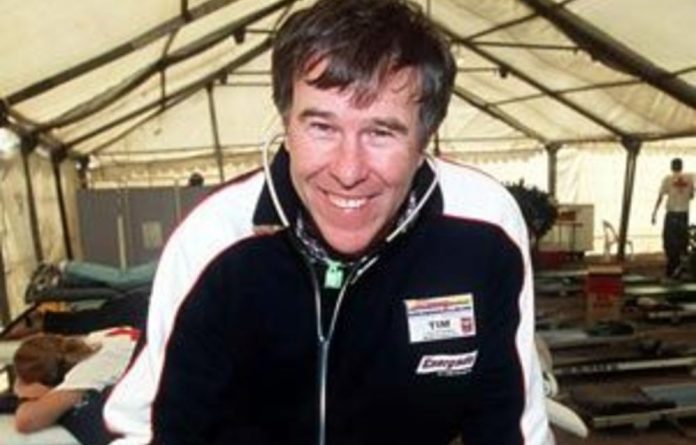 Niren Tolsi talks to Professor Tim Noakes, the pre-eminent sports doctor in the country who is also the founder and director of the Sports Science Institute of South Africa, about his expectations for the Soccer World Cup.

What are your expectations of the World Cup?
The World Cup will change the perception of South Africa in the rest of the world. And this will be for the better. South Africa is a beautiful country with a vibrant soul and a captivating mix of people, almost all of whom are remarkably hospitable and generous. We are not yet world-weary as are many parts of Europe and North America. Those who come here for the tournament will have the time of their lives and will remember it as their best sporting experience ever.
The economic impact will flow from this changed perception. We will be seen as a serious developing country. Since it is the developing countries that are currently viewed as the low-risk investment (compared to the developed world which is now clearly proven to be high risk), this could not have happened at a better time.

What has been the biggest challenge facing South Africa in terms of readying itself and hosting the World Cup?
The first challenge has been the cost. Hopefully this will not be a drain on future development of more pressing social needs in this country. Off field, I never had any doubts that the country would be ready and that we would be capable of producing stadium that are amongst the best in the world. The Cape Town Stadium is as good as any I have ever seen and I suspect the same applies to many of the other newly-built stadiums.
The big challenge has been to generate interest in our national team given that they are not competitive internationally. It seems that patriotism and a natural optimism amongst our SA soccer followers will overcome this at least for the first few games. Should the team perform better than expected, as they did in the Confederations Cup, this would be a massive bonus for the country.

What has been the biggest shortcoming in our preparing for and hosting of the World Cup?
Little attention to the advancement of soccer-playing in the country and to the ability of the national team. The reality is that the standard of the internal soccer leagues in South Africa is well behind the rest of the world and until it is uplifted, the national team will not be competitive with the best teams in the world. The World Cup should have provided the impetus for change but this opportunity was squandered. Why this should be so is the bigger mystery.

Three tips on things to do between matches in Cape Town?
Walk on the mountain trails in the Cape Nature Reserves and learn about the unique flora of the Cape. Visit Robben Island to understand that aspect of our shared history. Dine at La Colombe in Constantia to understand the sophistication of the city. The list is endless.

How do you think the World Cup will change soccer (its infrastructure, administration and the way it is played) in Cape Town? Sport in general?
No effect on either. South African sport will be uplifted by individuals and teams that have a global vision and a desire to be the best in the world. I have yet to find any influential administrator of any South African sport who shares that vision and who places sporting excellence as a non-negotiable. Until that happens, most of our sports and especially soccer will continue to be ordinary by global standards.

What are Bafana’s chances? Why?
Bafana are ranked as the third least-likely-to-win team. I suspect they will surprise by winning one of their pool games but are unlikely to advance beyond the pool stage. The reason is 15 years of neglect — the team has been in decline since 1996 and no one has tried to arrest the fall. With some intelligent interventions this could have been avoided.

Player to watch out for? Please choose one South African and one international? Why?
Steven Pienaar is perhaps the best player in the Bafana team. He is the creative heart of Everton and he needs to do the same for Bafana. And Wayne Rooney. If he scores goals, England can win the World Cup. I suspect that he will eclipse the performances of the more favoured players in this tournament.

Anything that you would have done differently in the preparations of the team for the World Cup?
There should have been a massive focus on uplifting the performance of the national team. This should have begun the moment we won the right to host the World Cup.

How many matches will you be attending? Which ones?
I will be watching the semifinal in Cape Town and have the opportunity to watch one other Cape Town match. I have yet to decide which that will be.