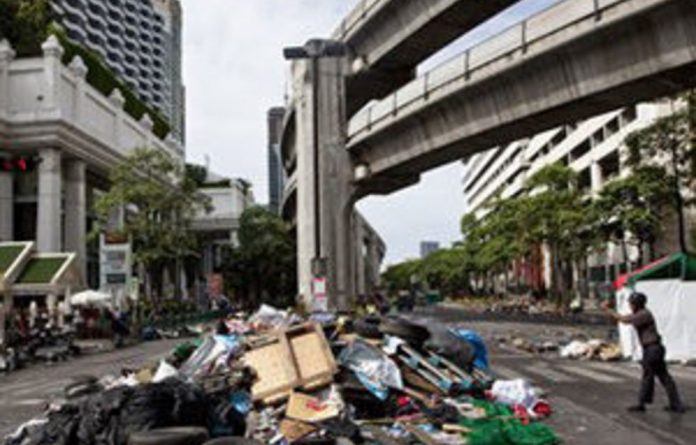 Thai authorities launched a massive clean-up operation in Bangkok’s charred commercial district on Sunday as the city prepared for the resumption of business after the worst riots in modern history.

Financial markets, government offices and schools are scheduled to reopen on Monday after closing down as Bangkok became engulfed in a wave of arson and street battles last week when the army dispersed thousands of anti-government protesters.

At least 54 people have been killed and over 400 injured since May 14. Almost 40 major buildings in the city were set on fire and the tourism and retail sectors have been devastated.

“The situation should return to normal from tomorrow when traffic returns to the roads and schools and government agencies open,” Prime Minister Abhisiti Vejjajiva said in a regular weekly broadcast to the nation.

A curfew would remain in force in the capital and 22 other provinces for two more nights as a precautionary measure, but would last only five hours instead of the earlier eight, he said.

“The government is striking a balance between restoring public confidence on security and minimising the impact of the curfew on innocent people,” Abhisit said.

Police said a gunman fired pistol shots at a bank building in the city’s suburbs in the early hours of Sunday, but there were no casualties. It appeared to be an isolated incident, an official said.

Otherwise, the city of 15-million looked eager for normal business to resume.

Thousands of volunteers, including hundreds of high school students, descended on the commercial district with brooms and garbage bags, carting away refuse and scrubbing graffiti off the walls.

“It’s very upsetting, it was a nightmare in Bangkok,” said one of the students from Triam Udom Suksa school, considered among the city’s most prestigious.

“I am sad but we will bring it back to life.”

Troops withdrawn
Troops were mostly withdrawn from Bangkok and remaining checkpoints handed over to the police.

The Skytrain and underground metro resumed skeleton services, with near-empty trains eerily passing above the devastated central commercial district, taken over by anti-government red-shirt protesters for more than two months.

Workers were erecting a metal barrier around the ruins of the Central World, South-East Asia’s second-largest shopping mall, set on fire at the height of the riots.

The red shirts, mainly rural and urban poor, demand new elections, saying Abhisit lacks a popular mandate and is propped up by the military and a Bangkok elite that has disenfranchised them.

Abhisit said in his broadcast that he did not wish to stay for his full term, which lasts until 2012, but did not confirm whether an earlier offer to the red shirts of a November election was still on the table.

The protesters had rejected that offer.

“It is now up to me to decide whether that election is appropriate … I don’t know what is going to happen next as some people have vowed to continue their struggle, calling for the resumption of the protest in June,” Abhisit said.

Red shirt leaders have said they will resume protests outside Bangkok next month, but the main anti-government Puea Thai party said it would bring a no-confidence motion against the government at a special session of Parliament on Monday.

The government is likely to easily defeat the motion.

The government will announce first quarter GDP figures on Monday, which are likely to show the $264-billion economy continued to recover well from the global financial crisis in the January-March period but was beginning to reflect the effects of the political crisis.

Even the government says there could be a contraction in economic output in the second quarter.

A final decision on whether the stock market will re-open on Monday is still be taken, since the Stock Exchange building was one of those set on fire during the riots.

Thai stocks and the baht currency are likely to show modest gains this week with relief the violence is over tempered by concerns the divisions in Thai society are well entrenched. – Reuters