The city of goals 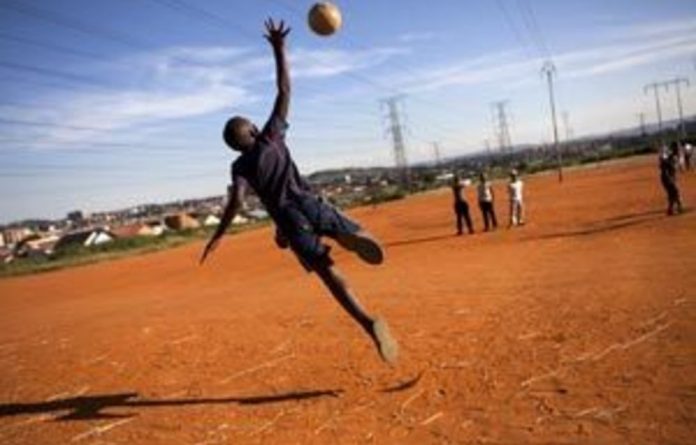 Jo’burg is vibrant when it comes to football.

People in Johannesburg simply love football. On Monday mornings in taxis, buses and trains people have serious debates about football after the weekends’ matches. It is easy to make friends in Jo’burg in the name of football. On big football match days, especially the Soweto derby between Kaizer Chiefs and Orlando Pirates, the streets of Jo’burg are always colourful with passionate football lovers wearing self-designed outfits and blowing their vuvuzelas.

Football lovers come from as far away as KwaZulu-Natal to watch big games in Jo’burg. Those who don’t go to the stadiums gather around in public spaces such as the Mary Fitzgerald square in Newtown where there’s a big screen or other areas where big screens are set up. When their favorite team wins, celebrations last for hours after the game.

And then there are those who want to be part of the action and come to try their luck with big teams around Jo’burg.

Augasto Palocius, Orlando Pirates’ development coach, says football is more organised in Johannesburg as opposed to other parts of the country.

“There are many football academies based in Johannesburg and we end up having many young players coming for trials at Orlando Pirates every weekend; we cannot accommodate everyone. People come here because of our facilities,” he says.

He adds: “We have many competitions as well in Johannesburg during the Easter period and the festive season, which is why you will find teams coming from as far as KwaZulu-Natal. People here love football. That’s not to say people in other parts of the country don’t — they most certainly do. But our facilities are a great draw card.”

Jo’burg boasts the Safa Soweto league. The Safa Soweto league owns the Klipspruit Developement Centre and has 80 clubs, which participate in the premier league and 30 clubs in the promotion league affiliated to it. There are also three teams in the Vodacom league. The league features u/11, u/13, u/15, u/17 and u/19 teams. The league uses 40 grassed fields and 61 grassless fields.

Former Bafana Bafana coach, Ted Dumitru, says: “We get quality players from outside Gauteng come here to try their luck. We have few academies and we need more so that we can accommodate the number of players that come here. Johannesburg is the place to be when it comes to football.”

Sibongile Mazibuko Jo’burg’s 2010 coordinator, says people come to Jo’burg because of the football activities happening in the city. “In Johannesburg we have five big teams which are in the Premier Soccer League [PSL],” she says, “I think that is why we have more and more people coming to our city looking for opportunities like our parents did back in the past.”

Jo’burg’s teams, including Yebo Yes, Alexandra United, Galatasaray, Meadowlands, Pimville Young Tigers and Soweto Panthers, all play in the Vodacom League. The Vodacom League is essentially the third tier of South African football and is administered by Safa.

The competition comprises of leagues in each of the nine provinces of the country, with 16 teams in each. The winner of each Provincial League qualifies for the annual Vodacom Promotional Play-offs where the winners of two streams (made up of 4 and 5 clubs respectively) qualify automatically for the National First Division.

Winners from the SAB Regional League qualify for promotion to the Vodacom Promotional League after a series of play-offs. A total of 144 teams are featured in the league.

Since the inception of the Vodacom League in 1998, it has successfully worked as a feeder to the National First Division.

Not only professional hopefuls play football around Jo’burg. On week days people in other professions get together and form their own teams and start leagues. Some of the leagues include the media league, where journalists from different media houses take each other on, and the legal representatives league, to mention a few.

In many townships around Soweto people are so passionate about the sport that they even share one football field. It is not uncommon for six teams to share a field, such is the enthusiasm to be part of the game.

“That is the biggest challenge we are faced with – everyone wants to play and we don’t have enough fields. We should fight to keep up with the number of people wanting to get involved in football. And we are sure, with the help of government, we can achieve our goal,” concludes Palocius. — www.africamediaonline.com

The game’s over, Jomo

Soccer City up and running

Fifa keeps sharp eye on doping ahead of World Cup