The future of Tuareg rock 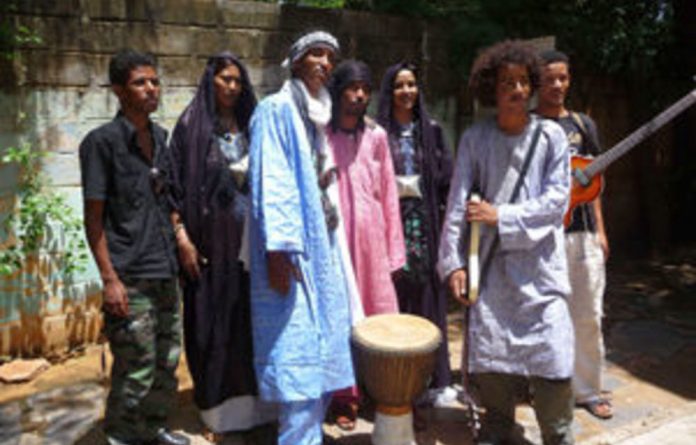 Tinariwen may not be a household name yet, but their rise to cultural prominence has had a major effect on the Tuareg people.

When this band of former rebel warriors laid down their guns to pick up guitars they placed the Tuareg people on the cultural map, bringing some much-needed awareness to the plight of the nomadic people’s difficult existence in the Sahara desert.

Although they regularly play shows across Europe and the United States, their music has also been promoted by mainstream media, raising the profile of the Tuareg’s first rock stars.

Influential British music magazine Uncut recently awarded Tinariwen its Uncut Music Award for their 2009 album Imidiwan. The band returned to the desert with a makeshift studio set-up to record an earthier collection of songs for Imidiwan, after the experimentation of 2007’s Aman Iman and 2004’s Amassakoul, which saw the band incorporating some Western influences into their music.

So while Tinariwen return to their roots, their music has inspired a new generation of Tuareg rockers who are hell-bent on carrying their legacy forward. The most exciting of these young groups is Tamikrest, which translated from Tamasheq means junction, connection, knot or coalition — a fitting name for the seven-piece band whose members hail from Mali, Niger and Algeria.

“They are definitely the future of Tamasheq music,” says former Tinariwen manager Andy Morgan about Tamikrest, who he describes as the “spiritual sons” of Tinariwen.

“As far as I’m concerned, it’s Tinariwen who created the path,” says the 27-year-old Ousmane Ag Moosa, the leader and songwriter of Tamikrest.

“But the way I see it, if younger bands don’t come through then Tuareg music will eventually die.

“They created the path and now it’s up to us to walk down it and create the future,” he says.

Ag Moosa learned to play the Tamasheq guitar style while listening to a cassette that Tinariwen leader Ibrahim Abaraybone recorded in Algeria in 1998 and his band mates are all intimately familiar with the style.

So the band adopted the sound of Ishumar rock, the Tuareg rebel music that was created by Tuaregs from Mali and Niger who were living in exile in Algeria, Libya and Burkina Faso during the periods of armed struggle.

Their debut album Adagh (Glitterhouse Records) shows early signs that the band has no intention of limiting itself to one sound.

The most noticeable additions to the traditional Tuareg sound is the use of bass much higher in the mix, giving it more of a rock feel, and the addition of slide guitar, played by producer Chris Eckman of rock band Dirtmusic whom the band met at the 2008 Festival of the Desert.

Opener Outamachek signals very early on that the band’s main inspiration is drawn from Tinariwen, although some searing blues-rock guitar and a reggae bass line show that Tamikrest are listening to a lot more than just Ishumar rock.

“Music isn’t something you study; it’s something you learn with your ears,” says Ag Moosa. “I’d been listening and playing along to Bob Marley and to Marc Knopfler and Dire Straits for years.”

Ag Moosa lists hip-hop, metal and Afro-disco among his influences. “We’d been listening to so much international music and that’s why the marriage with Dirtmusic worked,” he says.

The album highlight has to be Tidite Tille, a hauntingly beautiful song that needs to be heard to be believed. As Ag Moosa’s croaky voice sings the gentle vocals, gorgeous slide guitar and minimal percussion back an addictive Tuareg blues guitar riff.

It conjures visions of a desolate desert landscape after the apocalypse as a lone survivor struggles along, placing one foot in front of the other, trying to make it to a place where life still exists, like a desert dirge.

Adagh is, without a doubt, one of the most original and important albums to come out of West Africa this year but only time will tell whether it has success in carrying Tuareg culture forward to the rest of the world.

Another band that is carrying Tuareg music forward is Niger’s Etran Finatawa, a band that South African audiences should be more familiar with after their nationwide tour here last year.

At the time, Etran Finatawa were playing a number of songs from their new album, which was as yet un-released.

Their third album Tarkat Tajje/Let’s Go (Sheer Sound) has finally hit the shelves and it represents a significant musical step forward for this band, which fuses the musical traditions of Niger’s Tuareg and Wodaabe tribes.

Opener Aitimani was a regular highlight during the band’s Johannesburg shows and on record it is a magnificent seven-minute Tuareg blues tune about family camaraderie.

Diam Walla follows with some great polyphonic chanting from the Wodaabe members and some propellant percussion, which makes the track a primal blues number about the effects of droughts on the community.

Aitma is a more straight-ahead hypnotic psychedelic Tuareg guitar piece, beautiful in its simplicity.Gourma, which means forest, is all about the Tuaregs returning from the refugee camps, whereas Imuzaran is an anti-war protest song.

It is clear that Etran Finatawa are branching out, moving beyond their initial subject matter of life in the desert and becoming more philosophical and more political.

With bands such as Tamikrest and Etran Finatawa forging new sounds for Tuareg rock, the nomadic people’s music appears to be in safe hands.

Tracking down the genre
Following the success of Tinariwen, there has been an explosion of Tuareg albums released in the past decade.

The band has three albums, 2007’s Bismilla, 2008’s Akh Issudar and the 2009 EP Terakaft Live. All three are smoking hot rock albums that have a more abrasive rough-and-ready feel.

They will be heading into the studio to record their new album in May with producer Jean-Paul Romann.

Both bands offer amplified roots rock, blues and folk in the local Tuareg styles, at times entering into full-on electric-guitar psychedelia, and I highly recommended them.

If you are looking for a compilation of different Tuareg bands, the Ishumar compilation comes highly recommended.