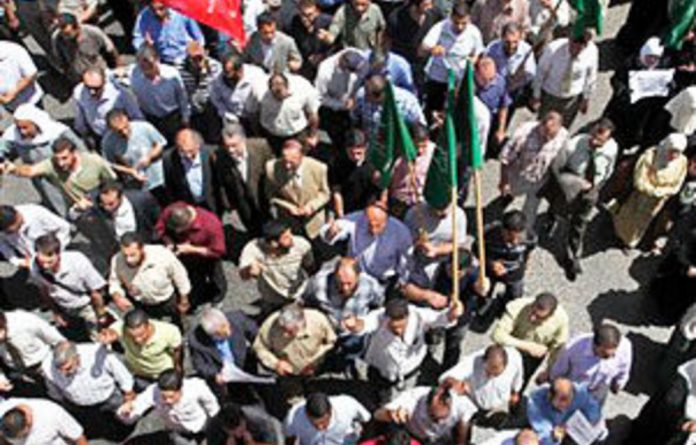 The Elders is a group of retired leaders founded in 2007 by South African icon Nelson Mandela.

“They called for a full investigation of [the] incident and urged the UN Security Council to debate the situation with a view to mandating action to end the closure of the Gaza Strip,” Tutu told a press briefing.

The group said the raid, which killed up to 19 pro-Palestinian activists, should draw the world’s attention to the “terrible suffering” of Gaza’s 1,5-million people, half of whom are children.

‘Highest level of international condemnation’
Meanwhile, Cape-based Radio 786 was anxiously waiting to hear from its reporter, Gadija Davids, who was on board the Gaza-bound aid ship.

“Unfortunately, no, we haven’t been about to make any contact with her,” programme director Mansur Modak told the South African Press Association.

“We are hoping that for everyone’s sake that she is okay,” he said as news spread that the survivors were arrested.

“We are working on the principle that no news is good news,” he said, confirming that South Africa’s Department of International Relations was trying to get information for her mother and father.

Calling for the “highest level of international condemnation” following the attack, the Department of International Relations said: “South Africa accordingly strongly condemns this action which reportedly took place in international waters, 65km off the coast of Gaza, in the early hours of Monday 31 May 2010.”

The department said the convoy, reportedly carrying 10 000 tonnes of aid, was a peaceful mission and the ships were not armed.

They were in urgent contact with South African missions in Tel Aviv, Ramallah and Ankara, where some of the ships originated, to obtain more information on the attacks.

“South Africa strongly condemns all military aggression by Israel against innocent civilians, including those in the occupied West Bank and Gaza.”

According to Agence France-Presse, Mark Regev, spokesperson for Israeli Prime Minister Benjamin Netanyahu, said those on board the ships initiated the violence. He claimed the policemen had been attacked with deadly force as they got on to the boats.

Israel warned in the lead-up to the flotilla setting sail it would arrest those on board.

Shock
Israel’s allies, meanwhile, froze military ties and summoned its ambassadors on Monday over the storming of the aid flotilla, as Muslim leaders slammed the deadly raid as “criminal” and “inhuman”.

United Nations Secretary General Ban Ki-moon said he was “shocked” by the deadly Israeli assault on a convoy carrying hundreds of pro-Palestinian activists, lawmakers and journalists through international waters towards besieged Gaza.

“It is vital that there is a full investigation to determine exactly how this bloodshed took place,” Ban said, calling on Israel to “urgently” explain itself over the raid, which left up to 19 dead, many of them reportedly Turks.

As the Vatican voiced “deep sadness and concern” at the loss of life, capitals across Europe summoned Israel’s ambassadors to explain the assault.

Ankara responded with fury, recalling its ambassador from Tel Aviv and warning the assault would have “irreparable consequences” to bilateral ties.

Police held back angry crowds shouting “Damn Israel” outside Israel’s missions to the country, as Turkey accused Israel of a “fragrant breach of international law,” and “disregard for human life and peaceful initiatives”.

Three days of mourning
Greece, which had dozens of nationals in the convoy, pulled out of joint military exercises with Israel and cancelled a visit by its air force chief, as an aid group claimed that commandos in helicopters had fired on a Greek vessel.

Israel said its naval forces were attacked after they stormed six ships loaded with thousands of tonnes of aid and with hundreds of activists aboard, and that both sides used live fire.

Egypt condemned the “acts of killing committed by Israel forces” while Kuwait’s Parliament speaker said the storming of the flotilla, which was carrying 16 Kuwaitis including an MP, was a “heinous Israeli crime”.

The European Union foreign affairs chief, Catherine Ashton, demanded Israel mount a “full inquiry”, as member states ordered an emergency meeting of their ambassadors to the EU in Brussels on Monday.

France President Nicolas Sarkozy accused Israel of a “disproportionate use of force” while Foreign Minister Bernard Kouchner insisted “nothing can justify” such violence.