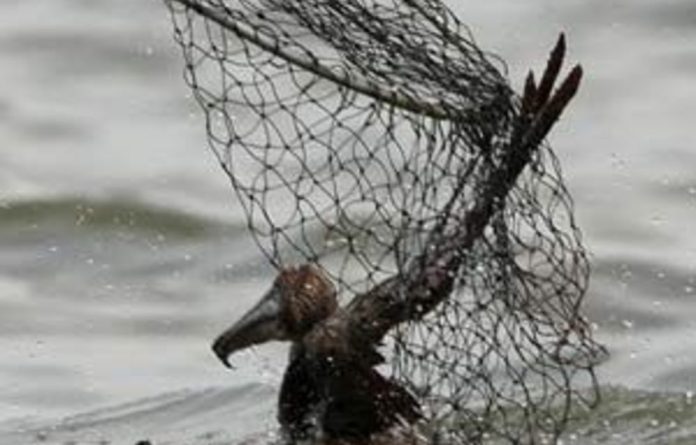 BP began capturing some oil spewing from its ruptured Gulf of Mexico well on Friday as President Barack Obama warned the company against skimping on compensation to residents and businesses hurt by the 46-day-old spill.

With tar balls washing ashore in Florida and political pressure mounting on BP to free up cash for damages, company executives told investors they were putting off a decision on whether to suspend the next quarterly dividend.

“Future decisions on the quarterly dividend will be made by the board, as they always have been, on the basis of the circumstances at the time,” the British energy giant said in a statement. Its annual dividend totals $10,5-billion.

BP CEO Tony Hayward said the company had plenty of money to meet its obligations, including $5-billion in cash and additional credit lines it could tap. It has already spent well over $1-billion on its oil spill response.

Obama, facing a monumental test of his presidency amid criticism he has failed to demonstrate leadership or emotion in the crisis, showed a flash of anger as he seized on the dividend issue in a meeting with state and local officials in Kenner, Louisiana.

“They say they want to make it right. That’s part of their advertising campaign. Well, we want them to make it right,” Obama said, criticising BP for spending lavishly on television ads to burnish its corporate image while the company considers the dividend payout.

Limited progress
It was Obama’s third trip to the region since the April 20 rig explosion that killed 11 workers and unleashed the worst oil spill in US history. In an interview on Thursday, he said he was “furious” at the disaster, which threatens fishing and tourism, two of the cornerstones of the local economy.

BP made progress late on Thursday when it was able to attach a containment cap atop the ruptured well, which came after several failed attempts to choke off or curtail the oil flow. It will take a few days for the operation to reach optimum performance, at which point the company hoped to be able to siphon off 90% of the leaking oil.

The US Coast Guard said the containment cap placed atop the gusher 1,6km beneath the Gulf’s surface was collecting about 1 000 barrels a day. That amounts to just over 5% of the 19 000 barrels per day the US government has estimated could be gushing from the well.

BP chief operating officer Doug Suttles told US television networks that the containment cap “should work” by capturing upward of 90% of the gushing crude.

US officials cautioned against being too optimistic, though Coast Guard Admiral Thad Allen told reporters the volume of captured oil should increase as BP closes vents on the containment apparatus to trap more of the discharge.

BP does not expect to be able to fully halt the oil flow until August, when two relief wells are to be completed.

In the meantime, Hayward vowed BP will “stand by our obligations”.

“We will halt this spill and put right the damage that has been done,” he said.

BP’s share price, which has fallen sharply since the beginning of the crisis, gyrated in London and New York. Standard & Poor’s cut BP’s credit rating to AA-minus from AA, following the example of two other rating agencies on Thursday.

The cost of credit default swaps insuring the debt of companies affected in the oil spill also fell on Friday. BP’s debt protection costs fell 27 basis points to 218 basis points, or $218 000 per year for five years to insure $10-million in debt, according to Markit Intraday.

But analyst Alan Sinclair of Seymour Pierce said, “My take on the underlying message is that the dividend is safe …”

Oil sheen and tar balls washed up along a stretch shoreline crowded with beachgoers in north-west Florida in what appeared to be the spill’s first impact on that state.

Florida, the so-called Sunshine State with a $60-billion-a-year tourism industry, has been bracing this week for the arrival of the spilled oil, which has already hit Louisiana, Mississippi and Alabama shores to the west.

The BP CEO had to apologise after angering Gulf residents by saying last weekend that “I’d like my life back.”

The region’s frustration with the company and the government was apparent on Friday at a free hamburger and hot dog lunch for out-of-work fisherman at the city hall in Lafitte, Louisiana.

“It’s all up in the air right now,” said Jerry Perrin, who has harvested crabs and shrimp for 60 years in Louisiana’s waters. “The government needs to start spending more money now.”

Obama is confronting one of his biggest political tests as his party girds for tough congressional elections in November. He called off a trip to Australia and Indonesia set for this month to focus on the spill, amid criticism over his handling of the crisis.

Neither Obama nor BP fared well in a new CBS public opinion poll, which found an overwhelming majority of Americans believing that both the president and the firm should be doing more to clean up the spill.

But the disapproval ratings for both Obama and BP’s spill response — 44% disapproved of the US leader’s handling of it versus 68% for BP — were little changed from a similar poll last week. – Reuters