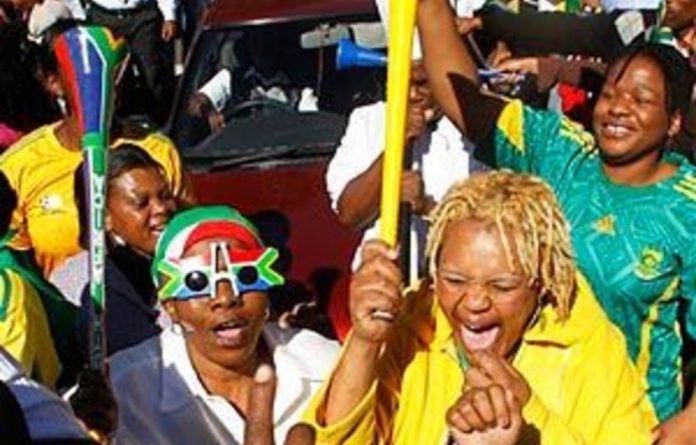 An expectant South Africa began counting down the hours on Thursday to the culmination of a six-year journey fraught with difficulty as it readied to kick off an historic Soccer World Cup.

Many people feared the country would not be ready, with suggestions last year that the tournament would be moved.

The sounds of vuvuzelas and hooting cars flooded SA at noon on Wednesday as fans did their best to show their support for Bafana Bafana and soccer fever reached new highs. There is no denying — the World Cup is here.

It has, without a doubt, been a testing build-up, with worries over crime, transport infrastructure, accommodation and security.

But six years after being awarded the first-ever World Cup on African soil and it is on the cusp of fulfilling its obligations.

The last of the 32 teams arrived ahead of the opening game on Friday as billions of people across the planet get set to tune in and cheer on their favourite stars over the next month.

Football-loving President Jacob Zuma paid tribute to his fellow South Africans, who are expected to turn out en-masse in a cacophonous sea of yellow and green, honking ear-splitting vuvuzelas, when the home team plays.

“The country has not just prepared the facilities — we have prepared ourselves psychologically,” he said. “The psychology of the country is tip-top.”

Fifa president Sepp Blatter said it was time to focus on the football and be swept along by World Cup fever.

“We find ourselves in a position of indescribable anticipation,” he said. “More importantly, this competition will prove that South Africa, and the African continent in general, is capable of organising an event of this magnitude.”

Three years after qualifying began, the opening game kicks off at the gleaming new 90 000-seat Soccer City in Johannesburg, with Mexico playing the hosts.

The 63 matches that follow will span South Africa, from Polokwane to Cape Town, with 10 stadiums being used, culminating in the final at Soccer City on July 11.

Road to the World Cup
The road to all of this began on August 25 2007 in Oceania when just 60 supporters turned up to watch Samoa play Vanuatu.

Since then, more than 20-million fans flocked to stadiums to witness 204 countries whittled down to 32.

Thirty-one of the teams have been here before, with Slovakia the newcomer. Minnows New Zealand made it through and North Korea qualified for the first time since 1966, when England last lifted the trophy.

England are one of the favourites to do it again with Fabio Capello moulding a disciplined team where morale is high, with Wayne Rooney, Steven Gerrard, Frank Lampard and John Terry his lynchpins.

But they are without the injured Rio Ferdinand, and a patchy 3-0 victory over South African Premier Soccer League side Platinum Stars on Monday was not convincing.

They get their campaign under way against the United States on Saturday, with Algeria and Slovenia also in Group C.

It comes as no surprise that “Red Fury” have been installed as favourites to lift the trophy.

Spain face Chile, Switzerland and Honduras in a first-round group that should not prove overly taxing and finishing first may set up an Iberian showdown against Cristiano Ronaldo-inspired Portugal.

Ronaldo and company would represent the first potential banana skin for a country that has so often flattered only to deceive at the tournament, with fourth the best finish, and that was 60 years ago.

Like Spain, no team from Africa or Asia has ever lifted the World Cup, and appears unlikely to do so here.

But the prospects are brighter in South America, with Brazil leading the pack. They face North Korea first up next Tuesday, with the Côte d’Ivoire and Portugal also lurking in Group G.

Mighty Argentina are an unpredictable element after only just hauling themselves over the qualifying line with Diego Maradona enduring a see-saw ride as coach that generated more questions than answers.

They are grouped with 2002 semifinalists South Korea, Greece and Nigeria.

‘They were wrong’
Whichever nation claims the $30-million prize and world football bragging rights, South Africa will also undoubtedly be winners, simply for hosting such a spectacle for the first time.

While a month still remains for things to go horribly wrong, Danny Jordaan, chief executive of the local organising committee, has been in combative mood.