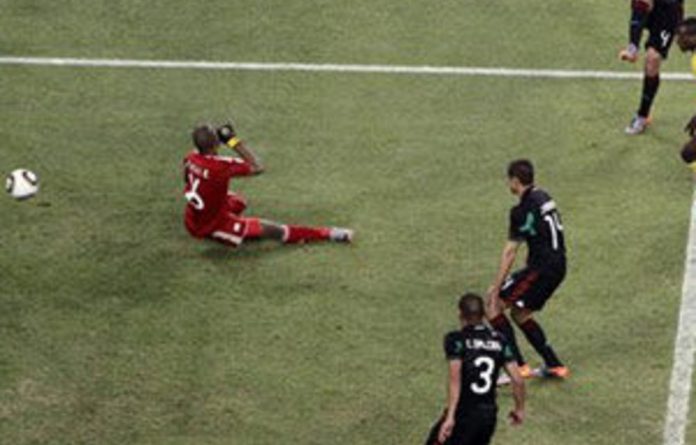 Bafana Bafana came tantalisingly close to giving South Africa the mother of all hangovers after a 1-1 draw with Mexico in the opening match of the Soccer World Cup at Johannesburg’s Soccer City on Friday evening.

Man of the match Siphiwe Tshabalala lashed the ball into the roof of Mexican Oscar Perez’s goal in the 55th minute to send the hosts 1-0 up — and the 94 490 spectators in the stadium into delirium.

This was after a raking, defence-splitting pass from Kagiso Dikgacoi found “Shabba” haring down on goal on the left wing.

But the yellow fever that has overwhelmed South Africa in recent weeks was not to reach boiling point as Mexico strongman Rafael Marquez equalised in the 79th minute. The Barcelona defender-cum-midfielder was loitering free at the far post after Mexico played a short corner; which Giovani Dos Santos then whipped into the box.

The ball had evaded the otherwise indomitable centre-back pairing of South Africa’s Aaron Mokoena and Bongani Khumalo. It was one of the few lapses by the defensive duo, despite Bafana being besieged in the first half.

Torment
The SA defence was finding it difficult to get to get to grips with the Mexican forward line of Guillermo Franco, Dos Santos and Arsenal’s Carlos Vela — especially the latter two — who switched wings continuously to torment Bafana’s defence.

Dos Santos also tag-teamed magnificently with Paul Aguilar, a right-back pushing forward into a more advanced role in what was essentially a 3-4-3 formation by Mexico, to give left-back Lucas Thwala such a torrid introduction to the World Cup that Bafana coach Carlos Alberto Parreira replaced him at half-time with Tsepo Masilela.

Mexico were finding space behind the Bafana Bafana midfield with anchor Kagiso Dikgacoi occasionally found out of position.

In the 39th minute Vela bustled through on the left and his cross evaded Bafana goalkeeper Itumeleng Khune before bouncing off the thigh of Bongani Khumalo. The resultant corner saw Khune coming out to gather the ball again. But with the SA goaltender flapping at it like an R Kelly inspired ostrich “believing it can fly”, the ball was met at the far post by Carlos Vela. His goal was judged offside with only Pienaar stationed on the line.

South Africa’s midfield flickered into life at times but the final killer pass appeared to be eternally missing. Both Pienaar and Tshabalala were finding space on the wings but their passes either went listlessly past players, or out of bounds.

Meanwhile, at the other end, Khune was keeping Bafana in the match with some telling collections of crosses and decent saves, including one at point-blank range from Franco in the 34th minute.

Mexico had the better of the first half — the last few minutes of which appeared a portent for what was to follow in the second. Bafana won its first corner in the 44th minute of the first half, and a further three followed — the home side finally relieving some pressure.

But the boys in canary yellow upped their game in the second half, with the midfield trio of Modise, Pienaar and Tshabalala really starting to click — especially with some slick one-touch combinations.

When Tshabalala blasted the ball home to give the home side a one-nil lead, the bossing started in the Bafana midfield, but not before Khune made an excellent reflex save from a Dos Santos shot in the 62nd minute. Modise then started and almost finished a move that included Tshabalala and Mphela: sliding a deflection off goalkeeper Perez from a Mphela shot just wide of the upright.

In the 69th minute SA right-back Siboniso Gaxa stormed through the middle of the pitch before playing a through ball to Mphela, whose shot was blocked by Perez.

The boys were on song — and the music sheet appeared to be from an old Umkhonto weSizwe song — the”war” as described by Parreira was on. Some of the battle included township diski with Modise taking the odd occasion to taunt the Mexican defence with some flash footwork.

On song
The crowd, too, was on song. The vuvuzelas turned up the volume in intimidatory fashion whenever Mexico had a free kick or corner, and in support whenever Bafana did.

If this World Cup really is about a nation with its disparate parts finding each other then perhaps it is reflected in small things like how we support our team. The middle-class infiltration of Bafana matches may have watered down the possibility of the home crowd serenading its team with Shosholoza as easily. And the electric township rhythms found in Atteridgeville and Orlando were more static here, but there are new weapons to be found in the changing profile of football supporters in this country.

The deafening sound of the vuvuzela refused to be muted when Marquez scored in the 79th minute.

But the goal did not deflate Bafana, who created a few more chances, including a gilt-edged one for Mphela. A Khune clearance split Mexico defender Francisco Rodriguez and Marquez to send Mphela through. His shot hit the bottom right-hand corner in the dying minutes to deny South Africa a victory.

Parreira acknowledged that Mexico was “one of the most daring teams of the World Cup” with their 3-4-3 formation.

“In the second half time we made the balance in the game. We made chances in the game that we could have won it, but a draw is a fair result,” said Parreira.