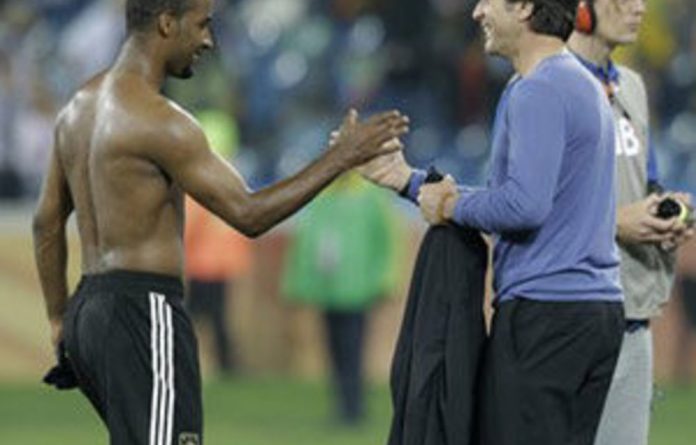 Germany gave a devastating display of their nation’s traditional power on Sunday to overrun Australia and Ghana were the toast of Africa after taking the continent’s first victory in its inaugural World Cup.

Before the match, Australia’s compact defence was tipped to give the youngest German team for three quarters of a century trouble in their match in Durban, but the dominant youngsters left Australia floundering and took the most convincing victory of the tournament so far. They scored their first goal through Lukas Podolski in only eight minutes and went on to plunder one more in the first half and two in the second, sending a stark warning of their intent to the other top teams.

Australia, already struggling, were down to 10 men after Tim Cahill was sent off in the 56th minute for a foul. Germany’s victory anointed possibly the tournament’s most beautiful stadium, clad in white concrete sails and topped by a Y-shaped arch alongside the Indian Ocean. Earlier Ghana, the first African nation to throw off colonial rule in 1957, brought joy to their continent by beating a 10-man Serbia with a late penalty despite missing inspirational midfielder Michael Essien through injury.

It was a bitter-sweet victory for Ghana’s Serbian coach Milovan Rajevac but just what Africa needed after the South African hosts were just robbed of victory by Mexico in Friday’s opening match, which ended in a 1-1 draw.

Blunder
Day three of the tournament brought another awful goalkeeping gaffe, this time from Algeria’s Faouzi Chaouchi who fumbled in a goal from Slovenian captain Robert Koren, giving his team their first win in major tournament finals.

The mistake was not as embarrassing as England’s Robert Green, however, who allowed the United States to equalise on Saturday with a schoolboy howler that made him a laughing stock in his home country.

But it added to complaints from coaches about the high bouncing Jabulani ball, the semi-synthetic turf in Polokwane and Nelspruit and the deafening noise of vuvuzelas which makes it difficult for them to communicate with the players.

“So far every free kick I saw went far over the goal while cross passes proved hard to control,” he said after training at Soccer City ahead of Monday’s Group E opener against Denmark.

Germany’s display of power and speed confirmed their status as potential winners along with Argentina, whose brilliant Lionel Messi ran rings round Nigeria on Saturday. African pride swelled in Pretoria’s Loftus Versfeld stadium, better known as the home of Springbok rugby as colourfully dressed fans and players danced to celebrate the Ghananian Black Stars’ win from a penalty by Asamoah Gyan.

Ghana reached the last 16 in 2006 and are one of Africa’s best hopes, among a record six competing teams, to go further than the previous best showings of Cameroon and Senegal in reaching the quarterfinals.

Ghana’s joy was particularly sweet in the pineapple-growing village of Oboadaka back home, where about 200 people danced after watching a World Cup match live, many for the first time, thanks to a television powered by solar energy.

Slovenia break tournament fast
The day belonged to Slovenia too, however.

Having not won a game in previous showings at Euro 2000 and World Cup 2002, the Slovenians danced for joy after going top of Group C following England’s 1-1 draw with the United States.

Off the field, South Africa 2010 has had a successful start, with little trouble beyond minor robberies of journalists and a few injuries in crushes at fan parks, despite pre-tournament fears of violent crime.

With millions around the globe glued to the world’s most watched sporting event, there were riots in Bangladesh after a power failure cut off the soccer feed, causing 30 injuries.

On a happier note, champions Italy, who play Paraguay on Monday in their first match, have made a home from home in South Africa thanks to a plentiful supply of pizza, pasta and even Italian plug sockets.

“We’ve tried to make it as much like Italy as possible so people feel at home,” Vincenzo Santoro, one of various Italian barmen flown over, said of the Casa Azzurri (Home of the Blues).

England’s 1-1 draw against the United States on Saturday was not a complete disaster, as they face supposedly weaker Algeria and Slovenia in their other Group C matches, but Green’s farcical mistake made him the butt of cruel headlines at home.