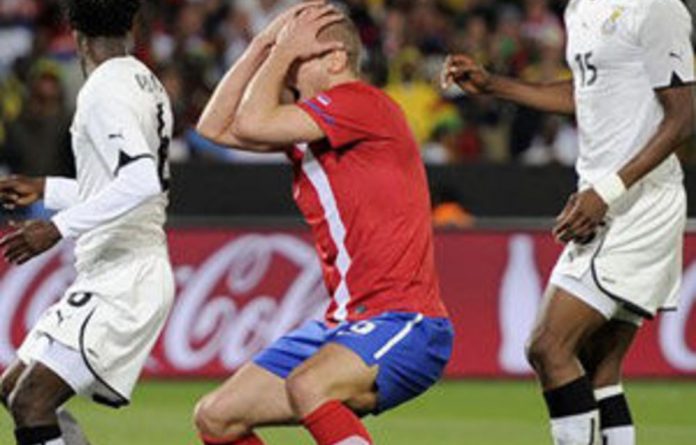 Ghana, arguably Africa’s most well equipped team, become the continent’s first nation to register a win at the Soccer World Cup after edging out Serbia 1-0 in a robust encounter at Pretoria’s Loftus Versfeld stadium on Sunday.

Asamoah Gyan’s 85th minute penalty was the slender difference between the two sides in a match described by Serbia manager, Radomir Antic, as one where “collective” effort dominated.

Ghana’s Serbian coach, Milovan Rajevic said after the match, that it was a “very difficult game with two different styles of play … a very tactical game”.

It was also an extremely physical game with no quarter given by either side. In total there were 25 fouls, four yellow cards (two on each side) and one sending off: that of Serbian defender Aleksander Lukovic — after two bookable offences — for a second yellow card for what appeared a rather innocuous challenge on Asamoah Gyan.

The Serbs were rugged in defence, thwarting Ghana’s attacks with relative ease — an approach replicated by the Black Stars.

But, in the 84th minute Argentine referee Hector Baldassi judged substitute Zdravko Kuzmanovic to have handled in the box and Gyan — latter voted man of the match — struck the ball past Serbian keeper Vladimir Stojkovic’s right-side.

Until that point, both teams had applied themselves with muscularity. Ghana right-winger Prince Tagoe had troubled the Serbian defence while the Balkan nation, in turn, appeared eager to try out several different training-ground combinations on their free kicks.

The first 20 minutes saw some crunching tackles, including what appeared to be an attempted clothesline by Serbia forward Nikola Zigic on Andre Ayew.

In the 53rd minute Prince Tagoe curled a cross from the Ghana right and Andrew Ayew’s diving header went flashing wide. Tagoe was at it again a few minutes later with a jinking run that caused the Serb defence trouble, and resulted in a corner.

From the resultant corner Gyan grazed Serb keeper Vladimir Stojkovic’s left-hand post after leaping up above the defence unchallenged for a towering header.

Serbia manager Antic said the game was extremely close and that “what made the difference is that our opponents had more luck than we had”.

“Ghana never had a clear-cut opportunity,” he said.

Both sides had had several chances in prior to the penalty, but nothing breathtakingly clear-cut, as evidenced by the shots at goal and shots on target tally: Serbia had 13 shots on goal, with only two on target while Ghana managed 16 shots on goal and a mere three on target.

But when Gyan did put away the penalty, the stadium, which had been reverberating to a predominately Ghanaian rhythm, especially with the Diehard Supporters Union of Ghana in full-song, erupted.

It would be hyperbolic to suggest this World Cup can completely renew a nation’s perception of the “other” — especially when the wounds of SA’s bloodthirsty xenophobic rampage two years ago remain unresolved and raw still — but there were heartening signs in the walk up to Loftus through Pretoria’s picturesque, tree-lined avenues.

The number of South African supporters in Bafana shirts attending the match in support of the West Africans — and those who greeted every Ghanaian with a clenched fist and a comradely exhortation especially — suggests that we can slowly chip away at the edifice of parochialism and xenophobia with a football.

Rajevic, noted the importance of the win, not just for Ghana, but for the continent: “This is the first World Cup to be held on African soil and for us to be the first African side to win — we are happy. If the rest of Africa is happy, that makes us happier.”