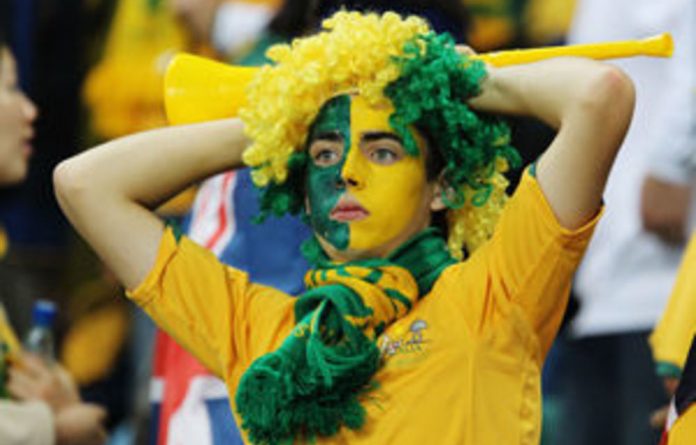 The Socceroo fans would have won the game hands down on sheer spirit, but in the end they gave way to Germany in a humiliating 4-0 defeat, leaving players dejected and fans teary-eyed.

Things couldn’t have started out differently for the Socceroos, who had John Travolta championing their cause, not to mention bus-loads of their countrymen in attendance. Thousands of fans clad in yellow-and-green marched their way to Durban’s majestic Moses Mabhida Stadium, sporting inflatable kangaroos and furry koala hats to boot.

The crowd would have given any South African fan a run for their money. The arching interiors of the country’s prettiest stadium were a cacophony of Australian chants, flags and general rowdiness. Their German counterparts, meanwhile, proved far more staid in their support.

But the cheers soon gave way to silence — and then sheer despondency — as the brilliant German side whacked in one goal after the other, with the Socceroos game plan proving inadequate and their side out-played at every turn.

It wasn’t that Australia were particularly bad. It’s just that Germany are very, very good.

Even with several key players down, including captain Michael Ballack, and sporting the youngest German squad to take on the tournament in three quarters of a century, the side put the Australians firmly on a back foot in the first round.

The World Cup finals record-holders — along with Brazil — showed why they’re still a favoured winner for this World Cup.

For the Socceroos it must have been a horrible sense of déjà vu. Before the previous World Cup, the last time they appeared on a World Cup stage was in 1974, with a 3-0 defeat by then host nation Germany.

With lightning-fast goals from forwards Lukas Podolski and Miroslav Klose in the first 26 minutes, the Australian midfield proved to be the major flaw in their game. Young German midfielder, Mesut Oezil, was particularly damaging to the Australian defence, passing the ball to the side’s equally deadly forwards.

“Our tactics were right but they dominated in the midfield,” admitted Australian defender, Scott Chipperfield, in post-match interviews.

While Australian fans were absolutely devastated, refusing to be interviewed, the players tried to be optimistic.

“That’s football I guess,” said midfielder Brett Emerton. ‘You just try to move on, learn from your mistakes and look forward to the next game.”

The Blackburn Rover player also made mention of the devastating send-off of the great Australian hope, Tim Cahill, for a tackle which no one was quite certain warranted the red card it received. “To be honest I didn’t see it … but the boys are saying it was pretty harsh,” he said.

It remained to be seen on Sunday night if Cahill would be banned for two games or one.

Meanwhile Germany’s Lukas Podolski was handed a miniature djembe drum to commend his award as man of the match. Typically brief in his comments, Podolski told journalists he had fun playing before carrying off the award.

The same couldn’t be said for the Australians, whose game descended into near panic in the closing minutes as Germany ruthlessly pushed forward to the goal at every opportunity.

“There wasn’t much talking in the change room,” said Chipperfield. “The team is very disappointed at the moment.”

It remains to be seen what changes Verbeek, the second Dutch coach to lead the side, could institute in the few days before the team’s next two games. He looked suitably shattered in the post-match conference, but remained determined.

“We never had the ball, especially in the first 25, 30 minutes,” he admitted — with ball possession for the Socceroos at 40% by halftime. “But the reality is, the next two games, we have to win.”