‘We wanted to play beautiful football’ 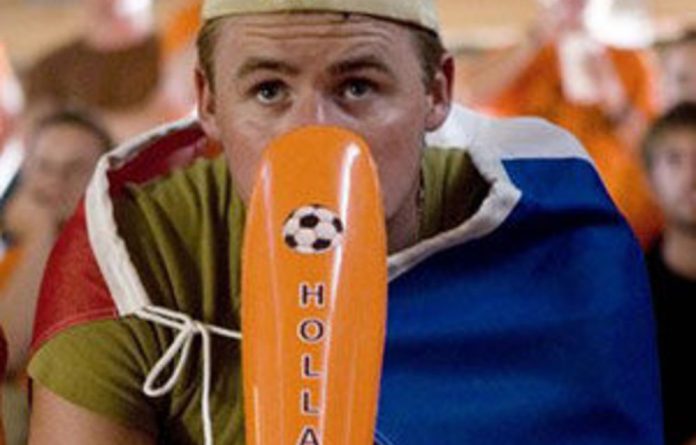 Holland’s 2-0 victory over Denmark at Soccer City in Johannesburg on Monday lacked the masterful brush-strokes of the traditional Dutch masters — of previous teams like Johan Cruyff’s 1970s Total Football proponents or the 1988 European Champions spear-headed by the likes of Marco Van Basten and Ruud Gullit.

Dutch coach Bet Van Marwijk admitted as much in the post-mortem afterwards: “In the first half we were not so good – and I told [the team] that at half-time. We wanted to play beautiful football, but we lost the ball too often.”

In the first half Holland’s 4-2-3-1 formation — with Wesley Sneijder, Rafael van der Vaart and Dirk Kuyt attacking behind Arsenal striker Robin Van Persie — meant they didn’t press very high up the field when not in possession.

This allowed Denmark to remain compact, draw the Dutch out of position slowly and then swiftly launch attacks that usually involved using the width of the pitch to change direction of attacks.

It worked extremely well for the inherently defensive and physical Danes, and both sides went in at half time level.

There was criticism that Van der Vaart, Sneijder and Van Persie were replicating each others movements and occupation of space and Van Marwijk admitted that this led to a problems in the first half: “Everything has to fit, you need depth in your play otherwise you will not score,” said the Dutch coach.

The Danes started the second half in a catastrophic after Van Persie’s cross from wide left was met by Danish right-back Simon Poulsen. His header deflected off Daniel Agger and past goalkeeper Thomas Sorensen for the first goal of the match.

Danish coach Martin Olsen — who was seen putting a consolatory arm around Poulsen at the final whistle — said the defender had had a “good game” despite the own goal: “I told him that it also happened to me one time in my career and that he just has to forget it and focus on the next game because he played well,” said Olsen.

However, the own goal was a spur of sorts for the Dutch, who upped their tempo. Kuyt sent Van Persie through in the 51st minute, but Sorenson advanced, cutting down the angle and saved for a corner.

In the 60th minute Van Persie was judged offside after putting the ball in the net, but the Danes were also attempting to recover. Olsen brought on three pairs of fresh legs at various times in the second half — including replacing Arsenal Nicklas Bendtner who, according top the Danish coach, hadn’t fully recovered from a groin injury but was forced to play because of more recent injuries to attackers Jon dahl Tomasson and Daniel Jensen.

But it was Holland’s substitutions that had the more invigorating effect: Van Marwijk brought on Hamburg SV forward Eljero Elia for Van Persie in the 77th minute and he immediately had an impact with his pace and power.

With Elia causing trouble down the left flank, Sneijder moved to the centre-forward position and came close to scoring when his shot from outside the box deflected off a Danish back, looped over Sorenseon and bounced off the crossbar in the 81st minute.

Elia went through the Dane’s back four in the 84th minute but his shot hit the upright and Kuyt was there to put the ball away for the Oranje’s second goal.

With concerns over the Jabulani ball, man of the match Sneijder said after the match that the numerous over-hit passes and attempts on goal — especially in the first half — had “both” to do with the willful trajectory of the ball at altitude and match confidence in the opening game.

He also complimented Elia’s impact as a substitute, saying that the winger played “a wonderful role” in the win by bringing “depth” to the team’s play.

“There is a lot pf creativity and speed in the team and on the bench. The guys can come on and really make a difference,” said Sneijder.