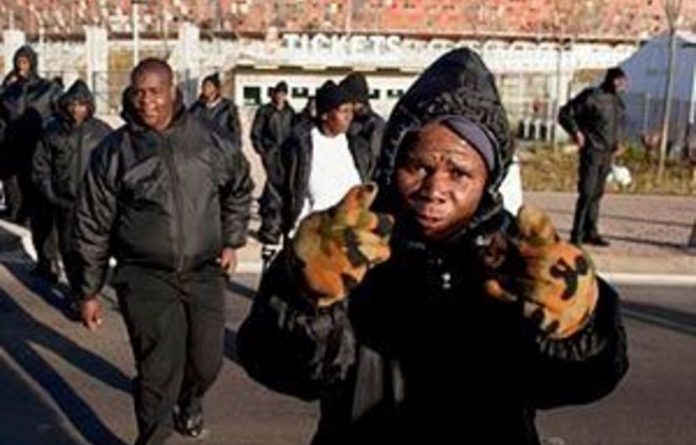 Thousands of South Africans staged a march on Wednesday to protest against lavish spending on the tournament and the sacking of security staff, inflicting a new embarrassment on organisers.

As the country marked the 34th anniversary of the Soweto uprising against apartheid rule, about 3 000 people marched in Durban to denounce Fifa and the government for their spending priorities when millions live in poverty.

“Get out Fifa mafia!” chanted the crowds in a Durban park, their ranks swelled by stewards who were involved in clashes with riot police on Monday after protests over their wages.

Monday’s protests triggered walkouts by other stewards, which have led South Africa’s police to take control at the World Cup stadiums in Cape Town, Port Elizabeth, Johannesburg and Durban.

Ever since it was awarded the staging rights, South Africa’s government has faced accusations it should not be spending hundreds of millions of dollars on stadiums when about 40% of the population lives on less than $2 a day.

“If we have money for stadiums, we should not have any homeless people or people having to live in shacks,” organiser Allan Murphy said ahead of the protest.

Much of the marchers’ ire was directed towards Fifa, which has made record amounts of money from the first World Cup to be held in Africa.

Football’s governing body has insisted that the dispute over stewards’ wages is not its responsibility, having sub-contracted the work.

Widespread anger
But there is widespread anger among South Africans towards Fifa, whose demands for a smooth-running tournament has seen the government pour R33-billion ($4,3-billion) into World Cup preparations.

“The government has taken the ratepayers’ money and handed it over to Fifa,” said Desmond D’sa, one of the protest organisers.

The walkouts by the stewards, a wildcat strike by bus drivers and ranks of empty seats have combined to take the gloss off a largely triumphant opening to the tournament last week.

As the last of the 32 teams was due to play their first match in the tournament, including joint favourites Spain, local organising committee chief executive Danny Jordaan said that “overall, it’s been great”.

But while organisers have rolled a series of new bus and rail services for the tournament, Jordaan acknowledged problems with transport and said restrictions on cars around the stadium may soon be extended.

South Africans have traditionally been wary of using public transport over fears of crime and are reluctant to leave the relative safety of their own vehicles.

“We have to try to restrict entry of cars into the precinct area around the stadiums and that will definitely happen,” Jordaan told South African television.

Show of national unity
Bafana Bafana make their second appearance of the competition with an evening match against Uruguay after their opening day draw against Mexico.

Many workers turned up for the office on Wednesday wearing their green and yellow Bafana jerseys in a show of national unity seen as priceless in a country that is still trying to bridge racial divides.

The Star said the staging of the World Cup underlined how far South Africa had travelled since 1976, but added that the party atmosphere should not obscure the problems facing the nation.

“Instead of its despised status as a pariah state, South Africa is hosting 31 soccer teams from around the world, as well as the thousands of fans that have come to cheer them on,” it said in an editorial.

“But post-apartheid South Africa is not a sea of love. It still has serious and potentially even explosive levels of inequality and poverty.

“We must be careful not to be misled by the bonhomie generated by the World Cup and common loyalty to Bafana Bafana.” — AFP