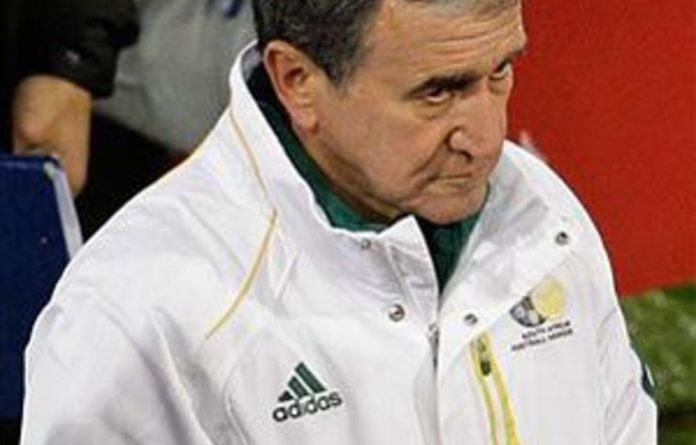 The blood of Bafana Bafana fans must have run as cold as the Pretoria air on Wednesday night after South Africa lost 3-0 to Uruguay in their second World Cup Group A match at Loftus Versveld Stadium.

But, while Bafana looked stilted in attack at times, and increasingly apprehensive at the back as they leaked goals, Switzerland referee Massimo Busacca emerged as important a protagonist in this match as players like Diego Forlan — who scored the first of the South Americans’ goals.

Forlan scored in the 24th minute with a 25m long-range effort that deflected off Bafana captain Aaron Mokoena’s back and looped over goalkeeper Itumeleng Khune into the net. The ball’s trajectory was an ungodly one, but had much less to do with the monotonous debate occupying this World Cup’s media and players over the suitability of the tournament ball, Jabulani.

With the match poised at 1-0 and South Africa attempting to claw their way back slowly in the second half — especially when they found width on the flanks when fullbacks Tsepo Masilela and Siboniso Gaxa overlapped — Busacca sent off Khune in the 76th minute to bring the home team’s momentum to a shuddering halt.

From the resultant penalty — smacked into newcomer Moeneeb Josephs’s top right-hand corner — Forlan got his, and Uruguay’s, second goal.

From the media tribune and television replays, Busacca appeared to have confused the World Cup with the Oscars, awarding the penalty for what appeared an appreciation of Uruguay striker Luis Suarez’s thespian skills.

Suarez had found himself free in the Bafana Bafana box, and Khune had spread-eagled himself into a starfish to guard his goal.

Neither got the ball and Suarez seemed to take his cue from Paul Bunyan, falling harder than an evergreen ready for mill over the goalkeeper’s outstretched left boot.

This, according to Parreira and assistant coach Pitso Mosimane, was for a litany of myopic refereeing decisions that had seen the home side denied several free kicks during the match.

Khune, a player who Parreira had a day earlier labelled a warrior who “goes to battle with a smile”, looked visibly emotional after the match, saying he was “obviously disappointed”.

But the penalty decision and dodgy refereeing wasn’t the be-all and end-all of the match. Bafana looked bereft of ideas at times when going forward.

In the first half especially, they appeared as if all the organisational drilling had denuded them of the ability to think and play with a dollop of flair, the confidence to try something off the cuff.

Their only chance in the first half came in its dying minutes when a Teko Modise cross was headed just over by Katlego Mphela.

Prior to this, there had been the odd nifty combination in midfield involving Reinelwe Letsholonyane, Siphiwe Tshabalala, Modise and Steven Pienaar — but nothing satisfying as a clear-cut chance.

Bafana were at times, also, too static in front of the Uruguay defence, with not enough movement off the ball.

But Uruguay were well organised and ruthless in defence, ensuring that any Bafana attack petered out at the edge of the box with some decisive tackling and compact organisation.

Parreira said that he believed that until the red card, described as “the key moment”, the game had been “balanced — both keepers were not busy”.

He suggested that he was about to introduce Moroka Swallows speed-merchant, Siyabonga Nomvethe, but that plan was put paid to by the red card, which saw him subsequently take off playmaker Pienaar to introduce Josephs in goal.

Some of Bafana’s best chances came when the fullbacks overlapped: in the 65th minute, for example, Bafana managed to get the ball wide on the right, Pienaar found Gaxa, who whipped in a dangerous outswinger that Mphela got a head to, but the header went wide.

Minutes later, the ball was worked out wide and Pienaar’s lay-off to Modise saw the Orlando Pirates midfielder — who is still waiting for his big moment in this World Cup — shoot over.

Pity then that Bafana didn’t optimise on the thunderous support they received at Loftus. Even if the middle classes have infiltrated the game of soccer in this country and altered the way we support, it certainly didn’t dampen it.

Midfielder Kagiso Dikgacoi, who will be suspended for next week’s match between Bafana and France in Bloemfontein after receiving a second yellow card in the tournament, echoed coach Parreira’s view that the his team was still in the tournament: “We still have a game to play, and if we win, depending on the other results tomorrow [Thursday] and next week, we can still go through [to the knock-out stages] — we haven’t given up yet,” the Fulham midfielder told the Mail & Guardian.

While Dikgacoi has a ready-made replacement in impressive Lamontville Golden Arrows midfielder Thanduyise Khuboni, it would be interesting to see what other changes will be made to the team.

Mosimane said it was too early to tell and that the decisions still lay before Parreira, but the head coach did say the team would have to be more “aggressive” for their must-win Bloemfontein match-up.

A win in Bloemfontein is not beyond the possible, especially with the singular supporters who sing and dance like no others in the country, but will the boys be able to rediscover their spark?