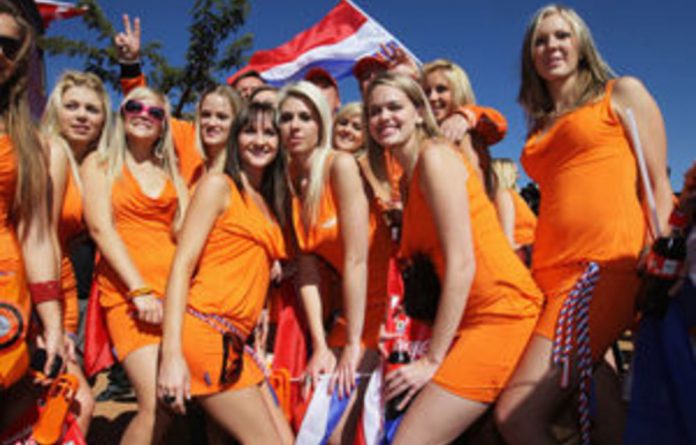 The 36 young women detained by police on Monday while supporting Holland in their Soccer World Cup encounter with Denmark might be forgiven for thinking, “Fick Fufa!”

That’s the latest satirical dig at the world soccer body in a growing flood of impatience with Fifa’s draconian branding rules and its mafia-like control of the country’s public spaces.

The “Fick Fufa” T-shirts now to be seen on the streets are the work of a Cape Town-based artist who told the Mail & Guardian they express his frustration with Fifa’s domination of the country.

But he asked to remain anonymous, fearing that Fifa president Sepp Blatter’s reach could extend even to his day job, which he would like to retain.

He produced a run of 120 T-shirts, which, he said was a non-profit venture — he is selling them at no more than it cost him to produce. He is now printing more.

The women detained were wearing orange mini-dresses. Tiny Bavaria beer labels could be seen if you peered extremely closely at their thighs. Police held them for several hours for “ambush marketing” — for promoting “an unlicenced beer brand”, making international news. Two of the women were later arrested and then released on R10 000 bail.

“I should’ve flexed my muscle in response to Fifa’s demands a long time ago,” Zille told the M&G recently. “They are not a colonial power.”

Kulula’s salvoes against Fifa have appeared in a series of ads lampooning its legal policing of the phrase “2010 Fifa World Cup”.

The first described the airline as “unofficial national carrier of the ‘you know what’?”; another referred to 2010 as “not next year, not last year, but somewhere in between”, while last week’s offered “affordable flights” to everyone — except Blatter — during “that thing that is happening right now”.

For him, Kulula’s special and unique offer is a free flight if he “needs to be anywhere in the country in the most convenient way possible”. But there’s one condition: He has to email Kulula at [email protected]

“Everything related to Fifa is copyrighted,” Hayibo’s Anthony Pascoe told the M&G, and the T-shirt has been a top seller.

“We have a tradition of standing up to the man.”