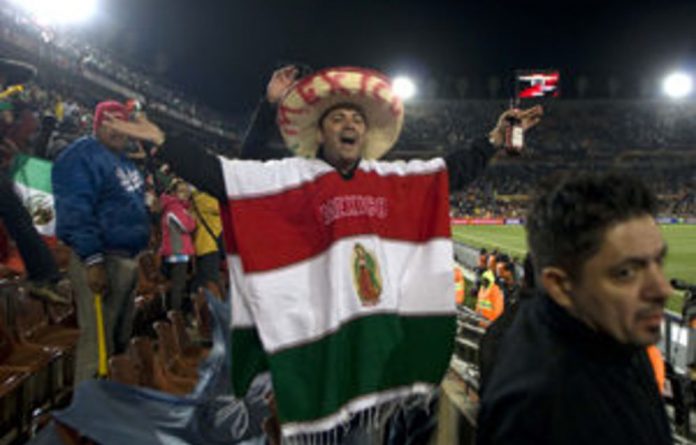 Bafana Bafana’s chances of qualifying for the knockout stage of the Soccer World Cup were delivered a blow akin to a Mike Tyson sledgehammer in Polokwane on Thursday as Mexico beat France 2-0 at the Peter Mokaba stadium.

The win means both Uruguay and Mexico go into the last round of Group A matches on four points each: a draw will suffice for the Latin American duo’s qualification, making the result from the Bafana versus France match in Bloemfontein on June 22 irrelevant, if they do so.

But there is light: The French players looked inconsolable after the match: from captain Patrice Evra to star midfielder Franck Ribéry — the latter unable to field any questions from reporters in the mixed-zone afterwards.

‘Respond with pride’
A terse France coach, Raymond Domenech, who at times during the post-match press conference appeared lost for words, said his charges needed “to respond with pride” against Bafana.

Asked if the French team’s loss reflected a failure of his policy, Domenech, who has been much-maligned in the French press for his eccentricities — including proposing marriage to his girlfriend Estelle Denis on television after France crashed out of the 2008 European Championships 2-0 to Italy — said: “It was the failure of the French team this evening, so yes.”

And France were pretty awful: Les Bleus were, when attacking, incoherent and lacking attacking verve — despite creative talent including Ribery and Florent Malouda who has had a storming season for Chelsea in England.

France looked a team flat, down, and temperamentally out of sorts.

They were tortured at the back by the effervescent and always attacking Mexicans, with French right back Bacary Sagna experiencing an especially hard time against Carlos Salcido, the Mexican left back.

In swashbuckling form
Salcido was in swashbuckling form for El Tri, striking a shot from outside the box that swept past France goalkeeper Hugo Lloris’s far left post in the 17th minute. Ten minutes later he cut past Arsenal’s Sagna exquisitely and drew a save from Lloris with a fierce shot. His menace continued into the second half.

The Central Americans attempted to play most of the match in their opponent’s half with midfielder Rafael Marquez dropping from his screening position in front of the back four into defence, thus allowing fullbacks Carlos Salcido and Ricardo Osorio to move into attack in what is essentially a buccaneering 3-4-3 formation.

And when they get that right, El Tri move the ball around like football angels on tequila: without inhibition, quickly and sometimes succeeding in playing a range of dinks, chips, flicks and chest-downs.

They created several chances in the first half with the score still goalless when both teams off at halftime.

Threatening after the break
France opened the second-half looking threatening, especially when Evra went forward and clicked with Malouda and Ribéry — but this lasted all of five minutes.

France had, in the first half, looked most likely to score through the ingenuity of Malouda, so it was a questionable coaching decision when the midfielder — who had been restored to Les Bleus line-up in place of Yoann Gourcuff — was repositioned into a deeper inside right position in the second half.

The move was to, ostensibly, allow Ribéry more freedom upfront and act as a foil for the muscular, bustling Toulouse striker Andre Pierre Gignac who had come on for the ineffectual Nicolas Anelka. The plan never really set fire.

Rather, it was the Mexicans who drew first blood in the 63rd minute after a delightful lofted through ball from captain Rafael Marquez unlocked the French defence.

Manchester United-bound striker Javier Hernandez — who had come on for Efrain Juarez in the 54th minute — passed to Marquez and set off on a perfectly-timed run to latch on to the Barcelona midfielder’s lob. Hernandez then rounded the advancing Hugo Lloris in France’s goal and slipped the ball into the empty net.

They doubled in the lead in the 79th minute when Mexico was awarded a penalty after substitute Pablo Barrera was brought down by Eric Abidal. Another substitute, Cuauhtemoc Blanco, ran up from outside the penalty box D to smack the ball into Lloris’s right bottom corner.

Delirious crowd
Two-nil and the 30 000 or so Mexican fans amongst the 35 370 crowd went delirious with a series of “Oles” whenever their team completed a pass.

And so it ended. But, for South African football fans, there remains hope yet: The attacking Mexican team may go into their final match looking for a win to avoid playing a rampant Argentina who seem likely to finish top of Group B in the round of sixteen.

If this happens, anything is possible in the final match, meaning that Bloemfontein Stadium — a veritable fortress with, arguably, the best football supporters in the country — may just be the scene of one of South Africa’s most famous sporting moments.