‘Odidiva’ climbs the stairway to heaven 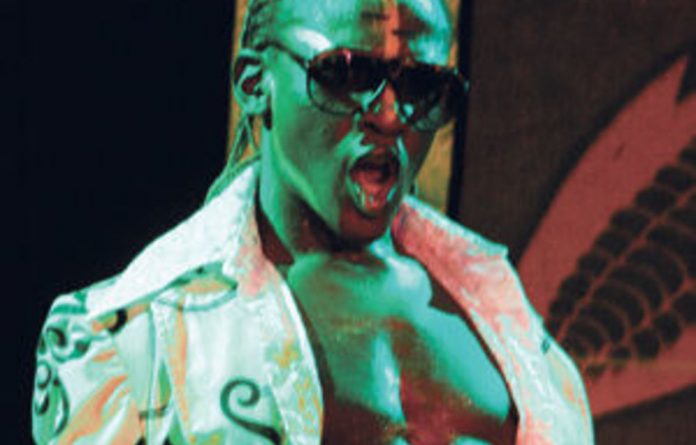 For a few hours I thought I’d died and gone to heaven. It was 11pm on Friday night, in the disused Market Theatre Laboratory, when Brett Bailey’s return production House of the Holy Afro slowly took off. There was standing-room only in the cavernous auditorium, now more like a downtown African nightclub than a respectable institution of theatre learning.

Bailey had erected a stage slap bang in the middle of the room with a catwalk reaching far into the audience. Golden curtains masked a faint yet growing hum. Finally, when the curtains opened, we encountered a troupe of funky African tribalists in grass skirts, kangas and zany sunglasses, beating lightly on bongo drums.

The slow wave built and it was clear that we were in for an urban funk cataclysm. On a balcony above hovered a DJ — he hit the buttons and the pulsating began. And for 90 minutes it was unstoppable.

What Bailey has created — that has enthralled audiences across Europe and in Australia — is a Seventies-style soul picnic with a pastiche of tribal ritual.

The high priest of the holy house is drag diva Odidi Mfenyana, a stranger in Jo’burg but well known on the Cape Town club circuit. As the frontline performer, “Odidiva” gets to change outfits for just about every number: think Elvis, Prince, James Brown and Diana Ross resurrected into a single spoken-word performer.

There are lengthy tirades about African hair and tribal custom and, as the night wears on, Odidiva seems to be reaching a spiritual catharsis.

What the whole thing graduates to is a disco party entering the risky area of African trance dance.

Backing vocalists go through the motions, doing the generic movements they’ve done, for decades, behind pop singers. Tribal boy dancers spar with drumming and dancing until the whole House of the Holy Afro virtually rises from its very foundation.

Odidiva enters as a Christian lay preacher and the congregation howls to the rafters seeking redemption.

At times, with Bailey’s work, it is difficult to draw a distinction between ritual and performance. And that is, precisely the director’s intention.