Another birthday, another empty chair for Suu Kyi 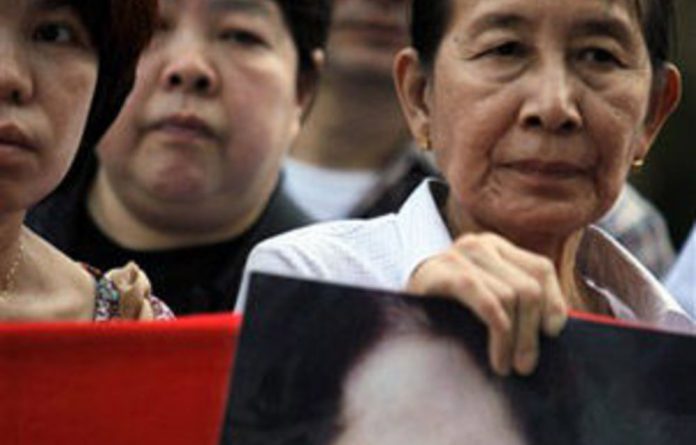 South Africans, including Archbishop Desmond Tutu, have joined people around the world in celebrating the 65th birthday on Saturday of Burma’s Nobel Peace Laureate, Aung San Suu Kyi, who has spent 5 349 days in detention, and is still under house-arrest in Rangoon, Burma’s largest city.

The South Africa Council of Churches (SACC) said it was a ‘gross injustice that a Nobel Peace Laureate should celebrate her birthday as a political prisoner in the country of her birth”.

SACC’s general secretary, Eddie Makue, told the M&G that “the most appropriate gift that could be granted is her political freedom, and the end of military rule in Burma”.

At a meeting of the Elders on Friday in Johannesburg, an empty chair was an eloquent reminder of the absence of Suu Kyi, who is an honorary member of the group. Recognising her birthday, Archbishop Tutu lashed out at Burma’s military government, saying they “do not serve the people”. Tutu also expressed concern over the forthcoming elections in Burma, scheduled later this year.

“With such deep fractures in society, the country needs an avenue for dialogue, he said in a statement. “Without a way to talk and reconcile with one another, the people will never achieve the peace and prosperity they deserve.”

In 2005, South Africa voted to block a United Nations Security Council resolution condemning human rights abuses in Burma, also known as the Union of Myanmar. At the time, a “deeply disappointed” Tutu described the vote as “a betrayal of South Africa’s noble past”.

The Free Burma Campaign South Africa (FBCSA) is using Suu Kyi’s 65th birthday this weekend to launch a postcard campaign, calling on the SA government to reject the forthcoming elections in Burma, and appealing to them to join Australia, the Czech Republic, Slovakia and the UK in demanding that the military government be taken to the International Criminal Court (ICC).

Dr Thein Wein, FBCSA chairperson, urged those “who have empathy with the people of Burma” to participate in the campaign, titled “Yes to real elections! No to military selections!” and to send postcards to the Minister of International Relations and Cooperation in Pretoria. “South Africa has a moral responsibility to support the people of Burma,” Thein Win told M&G. “We request the SA government to denounce the 2010 election and to support the 1990 election result,” he added.

Suu Kyi’s recently-disbanded National League for Democracy (NLD) won a landslide victory in the 1990 election, garnering more than 80% of the vote, but the ruling military regime refused to hand over power.

Eddie Makue told M&G that the SACC supports Aung San Suu Kyi’s “just and peaceful” struggle for democracy. “SACC accordingly urges the South African government to join in the call for Burma’s military rulers to be referred to the ICC,” he said.

If the batteries are still working …
In 2009, Suu Kyi was charged with breaking the terms of her house arrest when a US citizen, John Yettaw, allegedly swam across nearby Inya Lake and refused to leave her house. She was sentenced to an extra 18 months detention, amid claims by pro-democracy activists that the Yettaw incident had been manipulated by the military regime to keep Suu Kyi quiet in the run-up to the 2010 election, which is to be organised by an electoral commission chosen by the ruling generals.

According to Burmese exile media, Aung San Suu Kyi will celebrate her birthday in seclusion, with her two women companions. She has not been allowed visitors, and her telephone line has been cut for many years. But she does have a short-wave radio, so — if the batteries are still working — she will know that many people around the world are honouring her.

On the same day members of PEN, an organisation which promotes literature and human rights, gathered outside the Burma embassy in London. They called for the release of Suu Kyi and all other political prisoners. Earlier, on Wednesday, five Burmese exiles posed in front of the embassy steps — each with the name of a political prisoner written on their hands.

The M&G spoke to Htein Lin, an artist and former political prisoner, who participated in the protest. Htein Lin served a six-and-a-half year sentence for his role in Burma’s pro-democracy movement. During his time in jail he created art works without paint or brushes, using white cotton prison sarongs as his canvas.

Htein Lin told how he and fellow prisoners had celebrated Aung San Suu Kyi’s 58th birthday while they were behind bars in the notorious Myaungmya jail. “I painted a portrait of her secretly on prison uniform. We used it in our programme of speeches and poems,” he said.

‘No one is interested in democracy, only football’
Burma’s pro-democracy activists had admired South Africa’s struggle for freedom, he said. “Nelson Mandela was an inspiration to us. A friend wrote a song about him while we were in jail.”

“At the moment South Africa is making sure that no one is interested in democracy, only football,” he added.

The M&G has learned that, inside Burma, NLD youth members are planting more than 20 000 saplings to honour their leader’s birthday.

He told the M&G that: “Millions of other people inside Burma will be thinking of Aung san Suu Kyi in their hearts today, even if they are not allowed to celebrate openly. They will be praying for her release, and for the release of all political prisoners.”

Yeni said that, in spite of a “total news blackout” by military censors, a “young generation” of citizen journalists still manages to smuggle news out of the country to exiled media organisations, even though they risk long jail sentences by doing so.

He added: “During the apartheid-era in South Africa, Burmese people learned about your struggle through media. Now, media can help the whole world to share the joy of the World Cup. In the same way, we hope that South Africans can learn about Burma, about our shared humanity, and our desire for freedom.

The Burma embassy was not immediately available for comment.