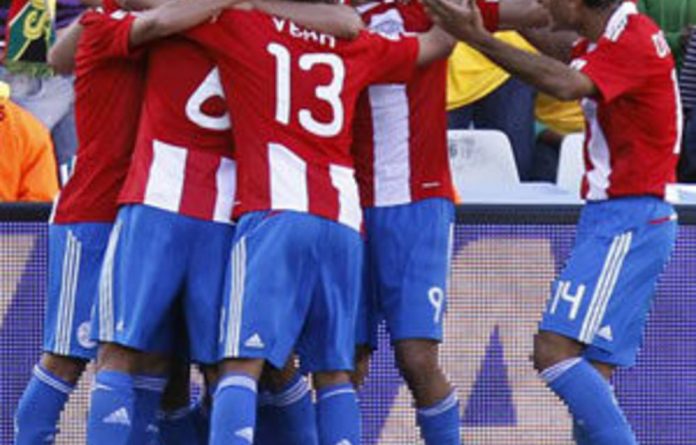 Paraguay beat a lacklustre Slovakia 2-0 to move top of Group F on Sunday and close in on a World Cup second round place.

Enrique Vera put the South Americans ahead after 27 minutes and Cristian Riveros grabbed a second four minutes from time in a game of few chances at Free State Stadium.

The win puts Paraguay on four points and leaves Slovakia with one. World champions Italy and outsiders New Zealand, who have one point each, meet in Nelspruit later on Sunday.

South American teams have now won five and drawn two of the seven games they have played in South Africa so far.

Paraguay had enjoyed the upper hand in the first half though Slovakia always looked dangerous on the counter-attack.

Their superiority was rewarded when Enrique Vera drilled the ball home with the outside of his right foot from 12 metres after being set up by Lucas Barrios from the left.

The goal spurred the Slovaks to produce their best spell of the game and defender Kornel Salata headed over when he rose to meet a corner in the 37th minute.

Minutes later striker Roque Santa Cruz should have put Paraguay two goals clear when he latched on to a poor back pass but his shot was blocked by goalkeeper Jan Mucha.

In the second half, Slovakia’s lone striker Robert Vittek was unable to get into the game and although a run by Jan Durica down the left earned a 62nd minute corner it was squandered.

Paraguay, who were tightening their control of the game and looked hungrier for the ball, secured a second goal when Riveros hit a left-foot drive for the edge of the box.

Their victory against Slovakia, who managed only one shot on target, should provide the platform for Paraguay to reach the last 16 with outsiders New Zealand to come on Thursday. – Reuters